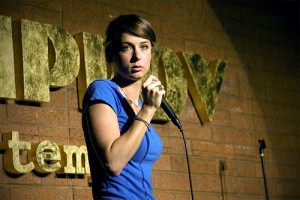 Iliza Shlesinger, the first female and youngest comedian to hold the title of NBC’s “Last Comic Standing,” will perform at 8 p.m. on April 12th in Heritage Hall as a part of the 2nd Annual April Fool’s Comedy Month, presented by SPA. This is a ticketless event for students with valid Penn State photo ID.

After winning the title “Last Comic Standing,” Shlesinger had her own half hour special on “Comedy Central Presents.” In addition, she has appeared on Comedy Central’s “Live At Gotham,” Showtime’s “Pauly Shore & Friends,” E! Network’s “Chelsea Lately,” “The Soup” and NBC’s “Last Call with Carson Daly.”

In the fall, Shlesinger will be the host of the upcoming dating series “Excused” for CBS Syndication. She also currently hosts her own hit web series “The Weakly News with Iliza” on thestream.tv. She is currently touring the US headlining shows at colleges and clubs.