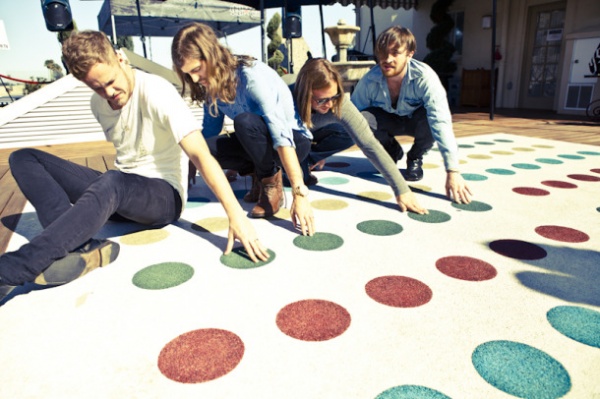 In roughly two weeks, Imagine Dragons and Nico Vega will rock the house (specifically Alumni Hall) for Penn State’s Founder’s Day 2013 concert. The show is a collaborative effort between two of the most recognized organizations on campus, the Student Programming Association (SPA) and the Lion Ambassadors. On February 22nd, both SPA and the Lambs will put on a four-hour event that delivers an enriching historical experience of Penn State’s prestigious and prominent past. But just two days prior, they’ll come together to deliver a rocking show from some of the biggest up and coming artists in mainstream music. Last year’s concert featured Parachute and fun., and it was an overwhelming success. Fun. especially proved to be a worthy headliner, alleviating the trials and tribulations of the audience with their theatrical smashes and behemoth stage presence. This year’s headliner, Imagine Dragons, is likely to parallel the success of fun.’s performance, if not exceed it. Funny enough, both fun. and Imagine Dragons share some similarities, yet diverge enough to ensure two completely individual and iconic concert experiences.

Imagine Dragons and fun. surged onto the radio with MASSIVE indie-pop records, and both breakouts were odes to a generation of troubled youth. “We Are Young” speaks to those who feel their last years of innocence slipping away, acknowledging the harshness of reality but tempering it with a hefty dose of alcohol and an even heftier dose of pop. “It’s Time” is a bit more upbeat, clothing its down-to-earth mentality and rugged pride with a sparkling mandolin and waves of synthesizers.

Both singles come from chart-dominating albums, both of which contain Night in the title. Fun.’s Some Nights is a collection of raw, unabashed diary entries, hip-hop and classic rock standing on either side of Nate Ruess’ celestial pipes. He wallows in self-pity and defies religion, but in the same stride brings his fellow broken-hearted dwellers together and convinces them to keep their heads above water and wait for the sun to shine again. For Penn State students, this time last year, that was what we wanted to hear. We needed to understand life was rough, but that the veil would lift, and the light would break through sooner or later. Fun. provided that sentiment through a truly spell-binding live performance.

But now, in 2013, it’s the hope that finally starts to cut through the darkness. We’re in a new year, a new beginning, and a new era for Penn State. So what better way to fuel that resurgence of Penn State pride through Imagine Dragons’ Night Visions. “It’s Time” alone idolizes that revival, keeping an eye on the past while reaching a hand out to the future. It’s optimistic pop with a grounded mentality, and fits the slow and steady progression the Penn State community is making towards becoming a globally respected academic institution once more.

But “It’s Time” aside, the entirety of Night Visions is a fantastically humane collection of radio-cut records. Vocalist Dan Reynolds is all too aware of his mortality, wading through sin with marred faith and a broken heart, but still striving towards a brighter tomorrow. To make his relatable life journey more interesting, he brings the rest of his band to fashion a landscape of lush synthesizers and glittering guitar-work around him. “Radioactive” symbolizes the gasping breath of rebirth (literally), the down tempo acoustic opening erupting into guttural dubstep breakdowns, spewing waves of unbridled alternative-pop power over the liberating chorus. “Demons” is fragile and stirring, as Reynolds lays bare his flaws and grasps onto his spirituality for support in the midst of a hellish emotional storm. Murky guitars and soft keys pillow against his heart wrenching confessionals, and the chorus soars with the melodic background wails. Not all is dim, however, with the Caribbean-speckled track “On Top Of The World,” which coolly nods to prior struggles while celebrating the joy of the present. Other records like “Tiptoe,” “Every Night,” and “Underdog” are fist-pumping anthems of strength and support, brutally honest and undeniably catchy. And even in some of the gloomiest parts of Night Visions, such as “Hear Me” and “Bleeding Out,” there’s a refreshing sense of realism amidst the pop/rock sheen.

So make sure to come out to the Founder’s Day show, and experience live one of the best rising rock bands of the decade. SPA and The Lion Ambassadors aren’t just bringing in a great musical act, they’re further sound-tracking our college careers. This is a show you DON’T want to miss.