5* is one of four DJ’s that will be spinning on April 21st at the Rave for Haiti. Having listened to some of her tunes already, we thought it would be best to let you know what you’re getting into if you come.

How did you first get involved in making music? What lead up to being a DJ?

Summer of my sophomore year of high school, one of my good friends, Stephanie, took me to my very first rave at Otakon (an anime & gaming convention.) I had a fantastic time, so I started going to local/underground raves and I just got hooked. I really got into the whole EDM scene – I went full electronic and never looked back. I even started dancing for production companies after a while, which was a ton of fun for me.

The exact moment I knew I wanted to DJ was at Fall Massive back in my senior year. During Datsik’s performance, I got pulled up on stage and I winded up behind the tables with him for a good 15-20 mintues. He just let me watch him, and I remember being like, “Yo, fuck [dancing]. I want to do THIS. I want to be the one people are dancing to.” It was so great to have that experience of being behind the tables, and I am so glad Datsik was cool enough to let me back there because if he hadn’t, who knows if I’d be where I am now.

After that show, the whole idea I had about what DJing was- sharing music and having such a pivotal role in a culture that I really cared about – just grew on me more and more. So when I got to Penn State earlier this year, I took an audio production class, wrestled my Dad into getting me a controller, and just took off with it.

What is the significance behind the name 5*?

There isn’t any haha. I just came up with something that I liked the sound and look of.

-How long have you considered yourself a DJ? What have you done in that time and what do you have planned for the future?

I’ve just passed my 6 month mark, so I’m still a baby as far as I’m concerned. But I’ve really done quite a bit for the short amount of time I’ve been at it. As far as gigs go, I’ve jumped from a frat, to the COOP, to Levels, to 19th Bar in DC, and now I’m looking at a spot on a 3 week tour across the country this summer.

It’s been crazy to look back and see how I’ve been growing. I’ve had to learn as much as I can, as quickly as I can to keep up with all of the offers I’m getting. Most DJs have at least a solid year of practice -sometimes even more- before they do gigs, but I just kind of dove head first into playing.

When I’m at these bigger shows and venues, I’m always the youngest and most inexperienced DJ in the bunch, but I’m okay with that. I couldn’t be happier to be in the place I am. I’m bound to make mistakes, but I’m rising to the occasion and I’m doing the best that I can, and so far that’s been pretty successful for me.

A collaborative mix with 5* and ATOMISK (also spinning at the Rave for Haiti 2012.)

-What drives you as a DJ? What do you hope to accomplish with your music?

I love sharing music with other people, and I love sharing the culture that comes with the music. They’re two things that have really had a major impact on my life, and I just want to bring the same joy that I felt to other people through music. But at the end of the day, I really do this for myself- I DJ what I love, and I can only hope that my audience loves it too.

Talking about “accomplishment” is almost a little silly to me. The only goal I have is to play sets that I’m proud to put my name on. I don’t have any aspirations in terms of a career or fame or any of that kind of stuff. I mean don’t get me wrong, I would love for some of that to come my way, but this is all about fun for me- not to create a name for myself. That’s the way it was at the beginning, and I hope that’s the way it stays.

I never imagined the possibility of reaching the kind of level I could be looking at reaching now. Like, the whole idea of being paid and travelling is so crazy to me. I feel like all of this shit just came and whacked me in the back of the head like a sack of cinder blocks or something. My head’s still kind of spinning, but I’m just trying to keep grounded and take it day by day.

-It seems like in the last year, the world has been bombarded with a steady stream of new DJ’s and electronic dance music. What do you think sets you apart?

Well, I’d say a few things set me apart from other DJs. The first, and most obvious, aspect would be my gender. You don’t see a lot of women in this industry- especially in dubstep and dnb. That’s really a double-edged sword for me because it may give me an edge in a small town like this with frats and stuff, but I feel like it puts me at a disadvantage when I get into a larger, more legitimate scene. I don’t want to be known as a female DJ. I want to be known for my music and that’s really hard to separate myself from. Sometimes people doubt me just because I’m a girl, which is silly, but it’s so rare to see a girl up there that’s serious about DJing that it’s almost natural to have doubts when you see one. But there are some positives to it. Like, overcoming that stigma is a big source of motivation for me. And as a girl, I know what gets girls moving, and when girls are moving, everyone is happy haha.

Another thing that sets me apart is the genre(s) I spin (dubstep and drum and bass.) I’m one of like 2 or 3 dubstep/dnb DJs that are established in State College. I mean, back in the DMV, dubstep and dnb have a huge following, so there are a lot more DJs that spin what I do back at home, but there are almost none here. House and electro dominate State College right now, so I’d love to expose kids around here to my type of music. So far people seem to like it, so I’m hoping to see dubstep start to gain popularity around here. 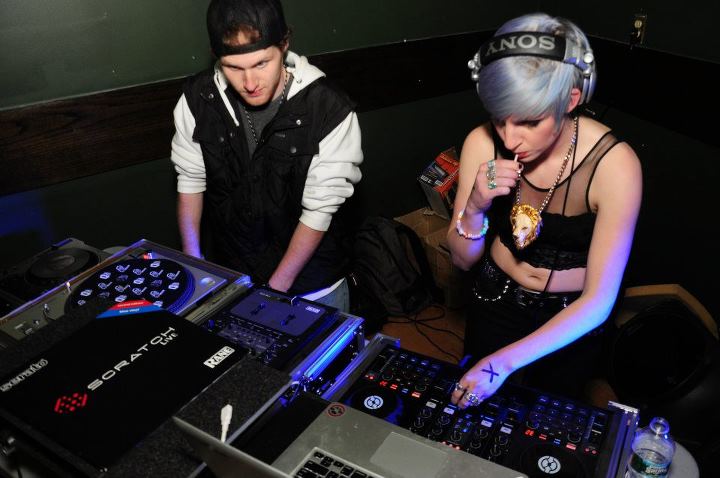 -Tell us about the Electronic Dance Music Club. How did you get involved and what roll do you play?

Wow. Where do I start? The EDMC has been pivotal to both my DJing and to my experience at Penn State. I love that club so much. I’ve gained so many friends through the club, and I feel like it’s definitely my “place” here at school. I’ve also met a ton of other DJs through the club, and we’re all pretty close. I get so much help and support from all of them. They’ve really helped me grow as a DJ, and it’s been amazing to have that.

-What’s your opinion on the PSU Music Scene?

I mean, it’s a small town, you know. It’s no DC or NYC, and it never will be, but it’s got great potential. I see this as a great place for local talent to get off of the ground and get attention. And with Limitless growing the way it has been, and with Levels coming in with a seemingly new attitude towards nightlife and music, I see the scene here going in a positive direction. The EDMC also has also demonstrated huge influence and power in the student body and in the local music scene, and it’s only going to keep growing. I’d say things are looking up!

-Sell us on the Rave for Haiti, what can the audience expect? Why should they pay $3 for this instead of 50 for Dayglow?

I’m actually really excited to play for the Rave for Haiti. I’m one of 4 local DJs playing (Keegan Tawa, Atomisk, and Mike Lin will be joining me) that night. We all have such different styles – Keegan spins electro, Andy (Atomisk) spins house, Mike spins moombah, nu disco, and dnb, I spin heavy dubstep and dnb– so the event is going to have music that will appeal to pretty much anyone who has a dancing bone in their body. The show itself is also great because it’s going to be 18+, Saturday night, cheap as hell ($3), killer atmosphere – lights, sweet sound set up, fog, dancers- and all of the funds are going to a good cause. It’s also the day after 4/20, so I know it’ll contribute to a kick ass weekend. I’m hoping a ton of people show for it. It’d be really nice to see.

-Any advice for other students trying to make it as a DJ?

In the words of my good friend and fellow DJ Mike Lin:

Check 5* out at on the world wide web: