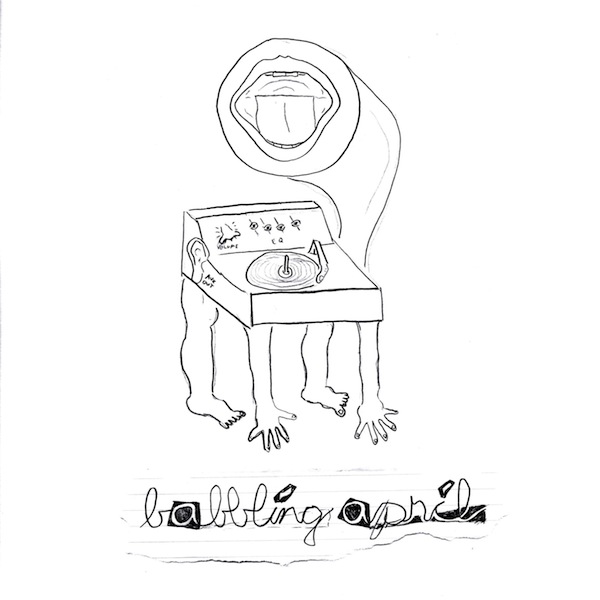 Babbling April is a lo-fi, indie based collaborative recording project based out of State College, PA. Dave New and Bob Jones form the hub of a rotating cast of musicians culled primarily out of the Penn State student body to create a sonically shifting pallet of bedroom recordings. Musically, the band blends acoustic pop and post rock, as can be heard on the groups adaptation of a Joan Jett classic, “Reputation”; but also touches on the hallmarks of sleazy garage rock with cuts like “Girl Ima Babe”. You can listen to and download the whole first release for free at www.babblingapril.bandcamp.com or on Facebook (search Babbling April).

SITR: After checking out your 11 song digital album on band camp, I wanted to know where the inspiration for each song came from? Or even a lyrical trend consisting of a certain topic?

Dave New: There is a certain downward spiral from the first tracks, which start in a place of nostalgia, to later ones which are very much fixed in a state of neurosis; not unlike some dark night of the soul drinking binge which finally brings you to the next morning of the final song.
Bobby Jones: Haha if you can find a trend let me know.

SITR: How do you guys fall onto the name, “Babbling April”?

DN: It was the name of Graham Greene’s first publication- a poorly received book of poetry, now long out of print.

SITR: So your music falls into the lo-fi, indie base, how did that come to be? You definitely do great stuff, but did you ever have any considerations for other genres?

DN: The lo-fi bit comes from the fact that we record with two mics in my closet of an apartment; the indie bit because that tends to be the default moniker for any music which isn’t easily classified these days. The style of this project was something of a genre departure for us compared to work we have done in the past, so while it would be natural for us to slip back into more conventional pop songwriting or rock music I don’t feel like there is anything to be gained by restricting ourselves to a comfort zone.
BJ: When you record an entire drum set with two mics in an ex-roommate’s empty room, you end up with a pretty dirty recording. Dave did a great job cleaning up the tracks, but there is only so much you can do. That lo-fi sound is great, though, because it takes me right back behind my set in that empty room every time I listen to it.

SITR: Has Babbling April gotten any other recognition through its music?

DN: We’ve popped up on some other music blogs like Turntable Kitchen and Cover Me, which has led to our music being available on www.hypem.com and www.mixest.com.

SITR: What are goals to come for your duo? Any shows planned and/or new album releases?

DN: A new single called “Cutouts” dropped today, and hopefully a new album out by May 2012.
BJ: The creative process on this album was really rushed from resources and budget constraints. Rumor has it the next one is gonna be a studio recording though so look forward to that.

SITR: Who are your biggest inspirations for your music? Artists, Bands, or anything else?

DN: Definitely Yo La Tengo, and tracks like “Disaster” by the Besnard Lakes or “Tunnelvision” by Here We Go Magic had a lot to do with the making of this record.
BJ: I love bands like Queens of the Stone Age and Tool. So yeah just like this record.

SITR: Do you guys have any last words or shout outs?

DN: Just to say thanks for the coverage and all you’re doing for original music in State College.
BJ: Not to be repetitive, but we really appreciate the acknowledgement and giving our album a listen. Also, I love you Mom!