There’s nothing that can be said about Sam August that can’t be better explained by watching his YouTube rendition of Free Bird, by Lynyrd Skynyrd.

Any other questions you may have can be addressed by his cover of Baba O’Riley by The Who.

In addition to being a YouTube sensation with his cover videos (Sam recently hit his 2,000,000nth view,) and playing outfielder for the PSU baseball team, Sam recently released his first album, Twang Man, which can be purchased below. We caught up with Sam to talk a little about all of the above.

SITR: You’re easily one of the best guitarists we have seen in State College. When did you start playing? What got you interested in music?

Sam: Thanks so much I’m really quite flattered by that compliment. I started playing guitar when I was 12 when I got my first cheapo Fender Squire Strat. Before that though, I had been drumming since I was about 5. I’m lucky to have a great dad that raised me on good music, I used to listen to my dad’s Beatles records in the basement and drum to them by making a drumset out of pots and pans. I stuck with it and got a real kit when I was 10, the same one I still use. My interests evolved into the Who, Zeppelin, Lynyrd Skynyrd, Rolling Stones, etc. Hendrix in particular inspired me to take up guitar, and I used to watch concert film of him at Woodstock playing with his teeth and everything like that, and I would try to imitate him. I’ve only been really into country music for the past four years, started mainly by Brad Paisley’s unbelievable guitar playing. My musical interests are always developing and evolving though, and I’m always trying to learn new things on guitar and get better every day.

SITR: Tell us about the new album, Twang Man. How long have you been working on it? How did you come up with/ produce the songs?

Sam: The 13 songs on “Twang Man” were all written and recorded in the past year and half. I’m always writing and recording stuff, and I decided it was time to release an album, so I took the best 13 that flowed together and made a record out of it. It’s a mix between instrumentals and songs with vocals, and an interesting blend between rock and country songs. I listen to a lot of instrumental guitar music from guys like Andy Timmons and Brad Paisley, so I model a lot of my instrumentals off of their stuff. To be honest, I like to show off with solos in my songs, but the challenge of an instrumental is to create an actual song with a memorable melody and structure, and that really what I try to go for in my songs. The few songs with vocals are more country based, and I got couple friends of mine, Ryan Thompson and Buford TK Justice (pseudonym) to sing them, since I just can’t sing for the life of me. I came up with the songs either through life experiences, e.g. my senior year in high school, being a struggling musician, a girl that broke my heart, you know, usual songwriting material (haha). Or more often than not I would write something that I thought sounded cool. As far as production, I recorded everything by myself at home on this little digital home studio thing, no computer program. Guitar, drums, bass, keyboards, all instruments are recorded by me, and I got some friends to sing some songs. Production cost was zero, which is excellent since I’m broke like every other college kid.

SITR: Last year at the SPA battle of the bands, Graham Spanier suggested that you find a backing band to help show-case your skills. Have you given any thought to this? Is there a particular reason that you perform as a solo guitarist?

Sam: One of the current factors in my music career is my baseball career. I play baseball at Penn State, and being a Division I athlete is a serious time-consuming commitment. So as much as I would love to, it would be nearly impossible for me to try to put together a band and carve out time out of my baseball and school schedule. Once I graduate, unless I’m lucky enough to bump around in the minors for a while, it’s going to be all music all the time. 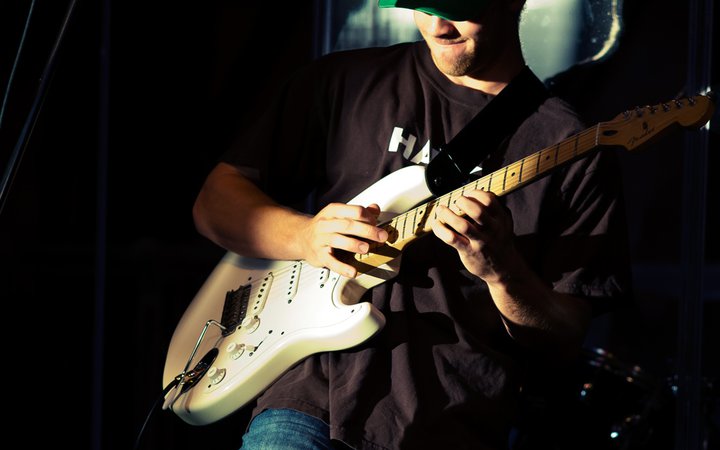 SITR: If you were to have a backing band, who (out of any musician ever), who would you have behind you and why?

Sam: Well as a guitarist my ultimate goal is to be the lead guitarist in the backing band of a superstar like Kenny Chesney or Jason Aldean. Professionally, country music is really the direction I want to go in. I absolutely love country music, and its fanbase is immensely extensive, and I think I really can contribute my guitar playing to that genre. In a perfect world, I would like to team up with a frontman singer, and be his guitarist in a super-duo formula, similar to Brooks n Dunn.
If this were 1969, to answer your question, I would have either John Bonham or Keith Moon on drums and John Entwistle on bass, and just jam out on stage hard every night.

SITR: You have an immense YouTube following (over 2,000,000 views to date,) how have your fans received the album so far?

Sam: Not sure how many of the 3200+ subscribers have bought it, but the handful that did have had very positive things to say. All of the feedback I get on my videos, whether they’re covers or originals, is overwhelmingly supportive and complimentary, oftentimes a little weird and funny.

SITR: What are your plans for 2012? Another album? More shows? Collaborations?

Sam:I have been collaborating with another kid on the baseball team, Joe Kurrasch, and we have a few big things planned. Keep an eye out for a music video coming this winter of an original song that he wrote that we both worked on and recorded.
I’m always writing and recording songs, so we’ll see what I come up with. If I have the time this summer, I’d like to create two albums. One album of country songs with lyrics. I’d also like to write an instrumental album that follows some sort of theme, like a soundtrack to a movie.
I can never make it to downtown open mic nights, so hopefully Penn State will put together some more events for students to perform.

SITR: What do you think of the PSU music scene? What are your favorite and least favorite parts?

For school-based events, there are definitely not enough. One student showcase per semester? This school has 40,000 people in it, many of whom are very talented musicians. There should be more opportunities for students to showcase their music, maybe have some HUB Latenight events, and more noontime events. I think more students would come to the noontime events if their peers were performing, rather than hiring an anonymous outside act to perform during lunch at the HUB. As far as downtown goes, I like how there’s usually bands playing at some bars on some nights. I’d like to see a few more open mic opportunities though. We’re a huge university, and one of the best. There could be a real chance for us to distinguish ourselves musically.

SITR: What advice do you have for other PSU students trying to do music and school at the same time (as you’ve successfully done so far?)

Sam: Being multifaceted is a great thing, and I think a lot of musicians know what it’s like, balancing music into the rest of their lives. Like I said, I have baseball taking up a ton of my time, and I’m sure I’m not the only athlete at this school who’s also a musician and vice versa. The best thing about music is that it’s an escape. Balancing music and school can be a real pain in the ass sometimes, but to know you always have a guitar or a piano to give your mind a rest and vent out some stress is just awesome. You have four years to put together a really great academic record at Penn State, but you have music for the rest of your life, so work hard in school, and play hard in music.