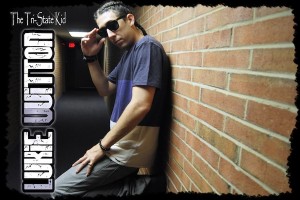 L.V, also known as Lukie Vuitton, a Penn State student, is also an aspiring artist. Currently, L.V at this point has only done shows he headlines and the reason is for keeping his image in place. A.S.R (Amen Shekem Records) focus is to keep L.V around artist who are in the same lane he is in, and avoid grouping himself with artist that don’t hold the same views and directions within the music.

SITR – Who would you want to open for if you had to pick any artists?
L.V – If I could open for anybody it would be a select few artists. first being Jay-Z then Kanye, Lupe, Fab, Fred The Godson, Immortal Technique, Lyfe Jennings, John Lennon (If alive) and that would the ones I can think of off the top of my head.

SITR – What accomplishments have you had with your music?
L.V – Some accomplishments have been getting the chance to do a mixtape with Violator Records Dj Pain 1 (who produced 2 tracks on Young Jeezy’s Last album, and did all the production for Trina on her last mixtape). The past 2 years i headlined the Hip Hop Part of the Millennium Music Conference Held in Harrisburg Pa. I brought The first ever Hip Hop Conference series to State College, PA (held at Jamaica Junction) 2 years ago I was asked to but together a 420 show at the Mezzanine, after the success of that i opened the doors for local artists to open for headline acts that the Mezzanine had perform.  Last April for 420 i held the First EVER outside Hip Hop Festival in downtown State College pa (At Central Parklet).. Right now im working on my new album and im working with 2 major producers (WHP out of Chicago who is a in house producer for Ace Hood, and Johnny Juliano  out of Pittsburgh who used to produce for Wiz when Wiz first gained recognition).. I have had several write-ups in the C.D.T Weekender, and i have had 3 songs played on B94.5fm in State College pa.

SITR – What inspiration is given from your music?
L.V – My Music has a social awareness content , but also very street and gritty. The one thing I hope to come from my music is awareness…. I just want artists, and fans of music, to be aware of what is really going on in the world and here in America so I make music that can be related to by all types of people… I try to mix the medicine with the food..

SITR – How is the Penn State music scene in your eyes?
L.V – The Penn State Music Scene has a lot of potential, but i dont feel there is enough venues available for Hip Hop Artists to have the chance to spread their wings and grow…