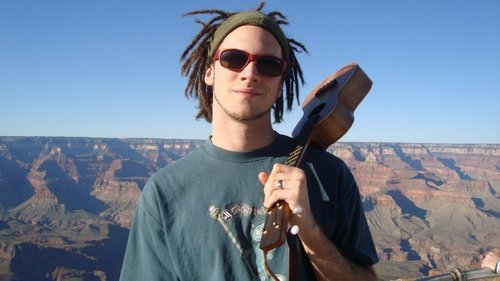 Jason O of the cover band My Hero Zero has his own solo project going.  His latest album In My Bones is an easy listen and definitely worth a purchase, especially if you want to support local music!

The first track “Far Away” opens up with a lone piano until his soft vocals come in with an autotuned backing track that adds a great pop element to the more somber song.  The next one adds a few more instruments to the mix with a guitar and drums, with other percussive instruments here and there for effect.  The result is a really full sound that comes from great and simple piano-led progressions.  “The World Just Keeps Spinning” starts out with great clean acoustic guitar,adding to the slower song’s chill effect.  I really noticed now that Jason O knows exactly how to use his cool vocals to his advantage on these songs.  “Always Be There” then came in to mix up the style a bit.  It comes off as an almost, to use another Jason, Mraz-style blues song.  I really loved the flow on the chorus especially.

That’s when “Glass” came on and completely blew me out of the water.  Until now the guitar had been simple chords for rhythm and maybe a little acoustic soloing.  Suddenly there’s this slapping on the guitar and really intricate rhythms; I couldn’t believe my ears.  His vocals were perfect over it. I was amazed someone could multitask singing like that while playing such a difficult and technical song.  The song “Suzy Johnson” comes next as a fun, light tune followed quickly by “Sing Right To You” (which isn’t a slow song, but it is in a minor key).  “I Need A Break” is a great slow calm song with some sultry harmonica on it.  The next song, “If Love Is An Island,” is an awesome jam, with lots of sick guitar fill and an almost Hispanic flair.  The next one got a little slow for my taste, but then “Two Music Teachers” comes in to pick me back up with another happy lighthearted tune (seeing a trend here?).  My favorite song was easily the next one, “I Quit My Day Job” and you can imagine why, it’s all about going out and chasing your musical dreams.  “Maybe It’s All The Same” is a slow sad song, which is a funny way to close a rather optimistic album to be honest, but it’s still an excellent song.  Overall it’s a great album, with a lot of pop style that I love, with plenty of Jason O’s particular twists.  Check him out on Twitter and Facebook!