Joe Paterno has passed away at age 85 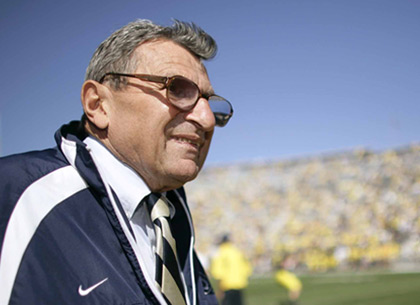 Today, January 22nd 2012 Joe Paterno has passed away after being diagnosed with lung cancer just a month ago.  Penn State has released a statement, which can be found here.  We will never forget you Joe… and what you have done for this university. #WeStillAre

Statement from Trustees and President Erickson on passing of Paterno

“Legendary Penn State football Coach Joe Paterno passed away today (Jan. 22) after announcing a month ago that he was diagnosed with lung cancer. Paterno was 85. The following statement has been issued by the Penn State Board of Trustees and University President Rodney Erickson: We grieve for the loss of Joe Paterno, a great man who made us a greater university. His dedication to ensuring his players were successful both on the field and in life is legendary and his commitment to education is unmatched in college football. His life, work and generosity will be remembered always. The University plans to honor him for his many contributions and to remember his remarkable life and legacy. We are all deeply saddened.”