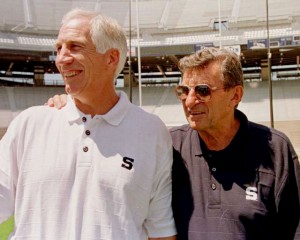 Joe Paterno is suspected to leave in a matter of days or weeks after the recent sex-abuse scandal involving Jerry Sandusky, which was never reported by Gary Schultz, the senior vice president for finance and business, and Tim Curley, the athletic director of Penn State. Joe Paterno also had some knowledge back in 2002 involving a sexual incident involving Jerry Sandusky, which Paterno is now receiving heat for. Gary Schultz, and Tim Curley are being charged with perjury from the lack of reporting Sandusky to Police.  There are no reports of Joe Paterno or Graham Spanier being faced with any charges, but all careers are on the line.