Johnny Depp is awarded the Generation Award, and rocks out with The Black Keys!

Matt Andersen
Mainstream Music, Music
Comments Off on Johnny Depp is awarded the Generation Award, and rocks out with The Black Keys! 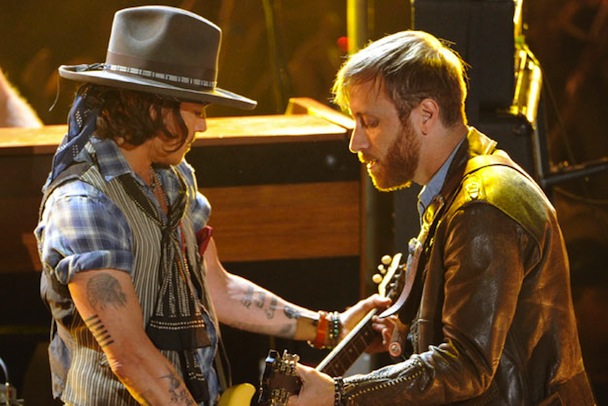 At this year’s MTV Movie Awards my favorite actor was awarded the Generation award, Mr. Johnny Depp.  It’s obvious that Johnny is one of the most talented actors currently working in Hollywood, since he frequently goes for rolls that require him to dig a little deeper to get into character (or maybe that’s just how he is?).  But this was even better, when they introduced Johnny, he was rocking on stage with The Black Keys to “Gold On The Ceiling”.  This had to be a huge moment for The Black Keys, and whether Johnny was on that stage or not, they would have killed it.  They told MTV afterwards that Johnny is a really good guitarist, and they want to start a T-Rex cover band with Johnny on guitar and Matthew McConaughey on bongos.  Check out the “Gold On The Ceiling” performance, and a snippet of them performing “Lonely Boy”.
The Black Keys – “Gold On The Ceiling” featuring Johnny Depp