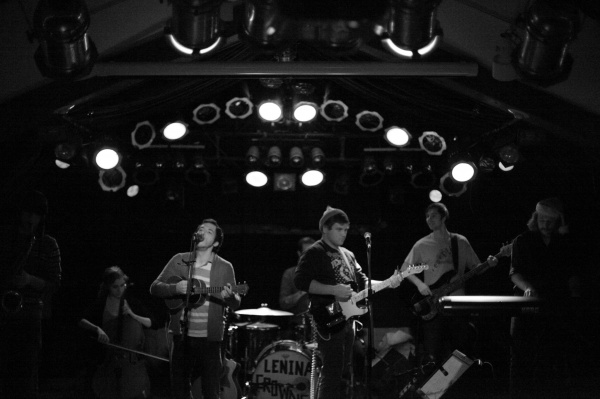 We caught up with indie rock and roll band Lenina Crowne last Friday before their fantastic performance at the Darkhorse Tavern to discuss their upcoming performance at THON 2014.

With seven members, Lenina Crowne is ready to take THON stage and keep the dancers moving! The band is quite the ensemble, consisting of Eric Faust on guitar on vocals, Mike D. Mulligan on keys, Emma Ripp on cello, Blake Gifford on ukulele, mandolin, guitar and vocals, Nick Rudenko on saxophone, Eric Seidle on bass and Gred Ford on drums.

The band got the opportunity to play at THON by being scouted by THON Entertainment, through the bar shows they consistently play. Eric Faust told us that they were first contacted by THON at the Darkhorse Tavern, after playing a show with a minimal set list and a small crowd, months ago. Faust says the THON Entertainment committee “Seemed to really like us, and were really cool.” The THON entertainment committee came out to a Lenina Crowne show at Café 210 in December, when the band had a much more robust set list. Over break, the band received the email that they were playing in THON.

Lenina Crowne says the focus is on covers to keep the dancers going with songs they know, but will be playing two high energy original songs that they’re sure will keep the crowd excited. Faust says that they have been averaging two or three shows a week, and has a good gauge of which songs are crowd favorites to play at THON. For a sneak peak at their setlist, the band tells me to look out for Jumper by Third Eye Blind, Hey Jude by the Beatles and Float On by Modest Mouse.

“The whole band feels honored to be a part of THON weekend, even as just performers”, says Greg Ford. When discussing their thoughts on THON, Eric Seidle says “”I think THON is really cool because it’s organized by students. It’s so impressive the scope and the scale that they pull off, and they succeed! It’s incredible. Experiencing that organization from the inside and how they’ve treated us has been really fun, and really impressive from all angles.”

Mike D Mulligan admitted “I’m pretty nervous, I’m not going to lie. But it’s going to be really eye-opening. Definitely going to be something that 20-30 years down the road I’ll be like “hey kids, I played in front of 20,000 people in college.”

Seidle told us that cellist Emma Ripp, who played with the band all last semester, has been student teaching this semester and has not been able to play with the band. She will be playing with the band for their THON weekend performance, which Seidle says is “going to be an extra layer of specialness for her to be playing with us again during THON.”

Faust says he has 15 friends who are dancing, and is excited to send them shoutouts throughout the set.

We cannot report the time that Lenina Crowne will play for the sake for the dancers, but we are excited to see them play! Look out for a special surprise from the band during their set this weekend.