Chris Will
Mainstream Music, Music
Comments Off on Listen & Love: "Carry On" by fun. 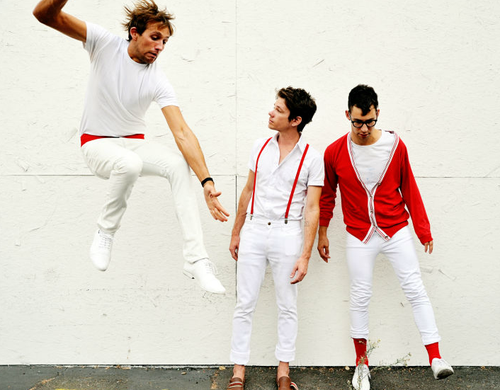 Riding off of the tidal wave from two of the biggest radio hits of the year, 2012 breakout theater-rock outfit fun. have successfully sewn their hip-hop tainted threads of alternative-folk into the fabric of mainstream radio. “We Are Young” and “Some Nights” both embrace pop and defy its very nature, speaking to a demographic that spans all ages and signifying an era where ubiquity isn’t necessary to build chart-topping singles (you’re welcome Gotye and Carly Rae).

“We Are Young” gives post-grads a chance to feel young again and pre-grads another excuse to immerse themselves in alcohol-saturated debauchery. It’s a song that breaks barriers, its tempo running wildly amuck as the stadium-sized hooks erupt, secreting melodic magma that engulfs the brain in its unadulterated euphoria.  “Some Nights” thrusts forward with sweeping, foot-stomping percussion, the massive choral chants inflating the song to epic heights. Never before has songwriting so downtrodden been delivered with such jubilation, as vocalist Nate Ruess brings scores of people together with a simple truth: some nights, we just can’t find our place in this world. “We Are Young” and “Some Nights” have concocted a whole new strain of top 40 radio. These records are loud, these records are big, but most of all, these records are real.

To follow up this pair of celestial pop beings with a third, equally star-studded smash seems a daunting task indeed, though not one too far-fetched for the trio of sharply dressed indie connoisseurs. But instead of going for another hook-battered behemoth as a follow-up, fun. throttled back and turned to a softer, more sedated cut. Enter “Carry On,” the band’s third single and out of the three, arguably their least polarizing effort.

Not to say that “Carry On” doesn’t pull with it’s own current, however. This single gives fun.’s fans the opportunity to step back, take a breath, and ignore the band’s radio-sodden, whirlwind career. “Carry On” brings back fun.’s roots, teeming with the graceful 70’s rock that speeds like a raging wildfire throughout their debut Aim & Ignite. Easily the most noteworthy aspect of “Carry On,” however, is that its composition doesn’t seek as much to awe. Instead, the song focuses on its lyricism in an attempt to inspire and embolden its listeners.

Like rain on a windowsill, the piano drops upon the firm acoustic guitar, echoing in the spacious confines of the track’s opening. Ruess believes advice can best be delivered through anecdote, so he fills the verses with his own jumbled assortment of bittersweet experiences. In true fun. fashion, the haphazard lyricism comes together slowly but surely, subtly adding down-to-earth tones as the song builds into the passionate chorus. Ruess muses, almost to himself, “No, I’ve never been through hell like that. But I’ve closed enough windows to know you can never look back.” Then he lifts “Carry On” into the sky with his stalwart voice, imploring “If you’re lost and alone, and you’re sinking like a stone, carry on!” Here we’re greeted by the song’s refrain, but it isn’t until the second half of the chorus the Ruess delivers arguably the most inspirational lyric of his musical career, “May your past be the sound of your feet upon the ground.”

Ruess isn’t saying that you’re f***ing perfect or that you’re a firework. No, Ruess has lived through the trials and tribulations of youth, he’s endured the pain and pressure of growing up. He knows that life can be hard, and so his striving push forward is to look to the future and “carry on!” As Nate Ruess rears back his head and shrieks like the talent-emblazoned rockstar that he is, you can’t help but throw your fist into the air and scream with him, “No one’s ever gonna stop us now!”