Genre busters Man Man played a legendary show at Chronic Town on Saturday night to one of the most lively crowds this reporter has ever seen at Penn State. Presented by ROUSTABOUT! the Philly duo, accompanied by several additional extremely talented musicians, lit up the lounge playing experimental indie rock jams and blowing minds.

The band played hits like “Piranhas Club” and  “Head On (Hold on to Your Heart)” and were joined by screaming choruses of die hard fans who not only led the crowd in singing, but created the perfect atmosphere for getting your dance on. I’ve been to a ton of shows here at PSU and I honestly can not think of a time where I saw a more dedicated and energetic crowd. Friendly mosh pits and epic jumparounds never ceased as the band powered through their tunes.

Lead singer Honus Honus (aka Ryan Kattner) included the audience in the performance by letting members of the front row highlight the singer with massive color-changing lights or using their heads for balance as he moved on top of the crowd. Honus even handed off his mic to an audience member to hold as he belted a chorus right above her head. 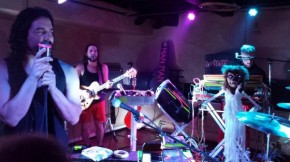 (photo courtesy of Will Olson)

In between all the interactive musical madness, there was also an incredible visual aspect to Man Man’s performance. Neon mosaics under blacklights were carefully designed around their instruments, many of which were improvised and original (one guy was wailing into an old PA microphone covered in duct tape). On top of that, a fluctuating rainbow of colors meticulously rotated to every beat that drummer and Honus’ partner Pow Pow slammed out. Honus added even more insanity by frequently changing costumes and becoming everything from a sheik to an alien wearing a blue Captain Crunch jacket. 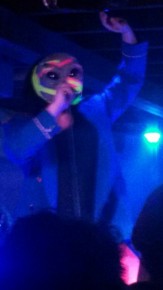 This show was truly epic. It was creative and artistic while still being extremely enjoyable. It was experimental and colorful and energetic and friggin fun as hell. I can not more highly recommend going to a Man Man show if you have not gone before. It’s an experience you won’t forget. You can catch them on Halloween in Philly if you’re around but that will be the last day of the North American tour. In the meantime you can check out their new album On Oni Pond which dropped in September.