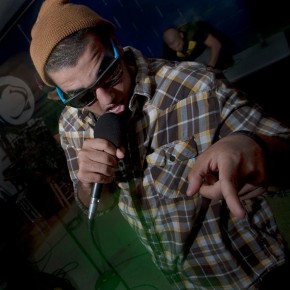 In a world where everyone seems to trying to become a hip-hop/rap artist, it’s hard to stand out. What separates one from another? Is it their style? Their flare?

While hip-hop has found it’s way to snapbacks and tattoos, lyrics are slowly but surely making a comeback in the game. This trend might be ignored by some up-and coming rappers, but it’s not lost on Malik Elarbi, known by his rapper name LRB.

“My style is a mix of Gambino and Eminem,” LRB said.

While LRB isn’t a household name like Childish Gambino or Eminem, his goals and aspirations reach as high as both artists. The Penn State sophomore has spent the last few months putting together his newest project entitled Baggage.

“The name of the mixtape is actually called Baggage. For me I didn’t have it rough growing up. Personally I have gone through a lot of stuff as an individual. That’s what Baggage brings to the table, a lot of people see me as happy go lucky kid, but like there is a lot of nights where I’ll just be in and not go out cause I’ll be messed up mentally.”

LRB teamed up with director Jon Kilmer for this project, and he’s planning to shoot two videos for the project this month. Kilmer has worked with big names like Huey Mack and Mike Stud. The up and coming rapper is also teaming up with One Love for this project. The producer is best known for his work on the hit single from B.o.B. “Airplanes”

“I got my 8 songs that are my go to songs, then I got a bunch of fresh ones that no one has heard yet.” LRB said.

Some of the most notable songs are his remix to the summer hit “Call Me Maybe” and Nicki Minaj’s “Starships”. Last week LRB graced the stage at SPA’s noontime student showcase. He performed for about a half hour, putting on quite the show for the crowd.

Baggage should be the mixtape that takes LRB to the next level. In the meantime, the King Of Prussia native has been performing at some different venues to build his name up.

He just got back from University of Maryland, where he performed with his cousin. He is also slated to perform in a Benefit THON concert with Penn State rapper Mike Wallz this January.

Check out LRB tonight at Indigo as he opens for Go Go Gadget.