Metal of the Month: KEN mode 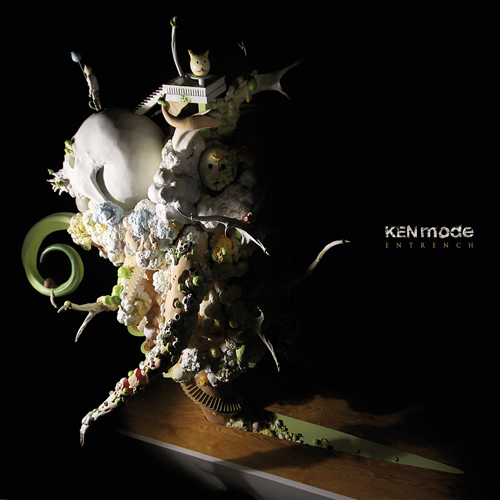 Welcome back to SITR’s monthly metal segment, where a little dose of metal can go a long way.

Last month’s post featured the hardcore/crust/thrash beasts Baptists, and this time we have another genre-blending yet bone-crushing release to go along in that same vein: Entrench from Canada’s KEN mode.

KEN mode have been labeled as noise rock, sludge metal, hardcore, post-hardcore… it honestly doesn’t matter. A preoccupation with genre placement draws the ear away from the music at hand; music which is, I assure you, heavy. KEN mode combine the energy and punch of a young, deranged hardcore band with a metal veteran’s approach to songwriting and style, making their latest album March’s best metal release in my opinion.

KEN mode will throw some people for a loop, I’m guessing, as they did with me on this album. While “genre wars” annoy me to no end, it’s no surprise that complications arise when critics attempt to attach words to KEN mode’s sound. Entrench contains some short, fast songs that feature gang vocals and enduring chants (“No; I’m in control!”) , yet these songs are so far from simple, catchy, Hatebreed-esque hardcore anthems. The guitar riffs are intense and crafty, yet are so dissonant and erratic that they barely resonate with you after each song ends. The tempos and song structures, driven by excellent drumming, display a superior level of technicality but don’t come off as overly proggy or elitist.

All of these conflicting angles, principles, sounds… whatever has been established as a formula for other types of heavy music, well, that just isn’t going to happen with KEN mode. They have distorted guitars, the singer screams, and they are loud- and that’s about all you can expect to be constant on this album. They challenge what’s taken for granted in many of the genres from which they draw influence, and it’s for this reason why I believe they aren’t very popular. Entrench is actually their fifth album, and in many ways it is an emergence for this band. It’s brought them many new fans, myself included.

Moving onto the actual content of the Entrench, it starts off with an incredible three-track punch containing some of the album’s best moments. If there’s one blurry memory you’ll have after listening to this album for the first time, among the soreness in your neck and the ringing in your ears, you’ll definitely be able to recall the chants at the ends of “No; I’m in Control” and “Your Heartwarming Story Makes Me Sick.” The tempo slows a bit in the middle of the album, but intensity doesn’t let up for a second. “The Terror Pulse” is full-out sludge metal, and is a perfect example of the incredible production on this album. While the bass guitar is often inaudible in much of rock, it seems to be the only thing capable of ripping through KEN mode’s dark, sludgy wall of sound. “Romeo Must Never Know” is a 7-minute long groove, showcasing the band’s progressive influences. After finishing that journey, the band returns to its in-your-face presence until the end of the album. Let me add that the riffing on “Why Don’t You Just Quit?” is quite killer.

So give Entrench a listen below, then pick it up on iTunes or Bandcamp and listen to it again and again. I guarantee you’ll find something new every time, although you might run out of furniture to break…