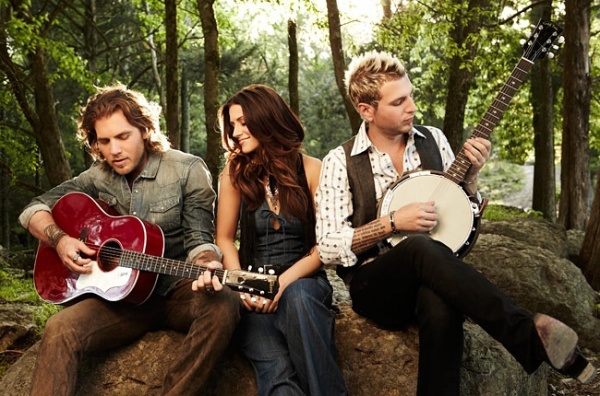 With Movin’ On being less than a week away, we here at State In The Real are here to be your number one source for everything Movin’ On. We will be showcasing a different band everyday from now until the festival on April 26. Gloriana is a country band that’s already made one appearance in State College, they performed at the Bryce Jordan Center in August 2009 as the opening act for Taylor Swift. Formed in 2008, and after experiencing some transitions, the band now includes brothers Tom Gossin and Mike Gossin (vocals and guitar), as well as Rachel Reinert (vocals, tambourine). Their debut single “Wild at Heart”, in 2009, was on the top 15 of the Billboard Hot Country Songs chart. Their first album, self-titled as Gloriana,  was released in August 2009. Their second album A Thousand Miles Left Behind released last year and was received well, with their song “(Kissed You) Good Night” making it into the Top 40 Pop chart. This country band is a great addition to Movin’ On this year and will add just the right kind of variety that we know fans will love. Be sure to check back everyday to see a new band showcased for Movin’ On!