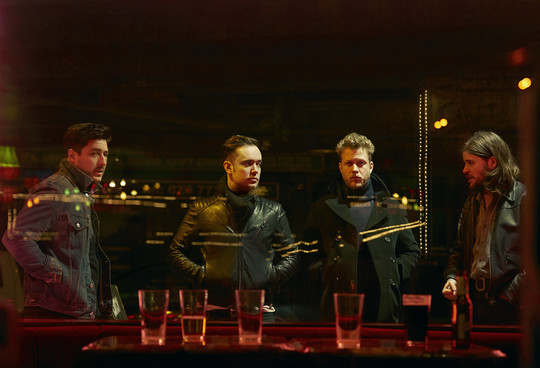 Earlier today, Mumford & Sons dropped a bombshell in the releasing of a new song, entitled “Believe.”  In doing so the band managed to:
1.  Officially silence all rumors of a band break-up.
2.  Give a giant middle finger to the passionate critics, incessantly accusing the group of using the same chord progressions, same rhythms, etc.
3.  Rekindle everyone’s love affair with Mumford & Sons.

The song is unlike any other we’ve heard from the 4-piece group.  The piano has been replaced with ethereal synth; the banjo has been set aside to make room for a soul-awakening electric.  There’s no debate that “Believe” is a far cry from Mumford & Sons’ typical acoustic-guitar driven sound.  The approach towards the song is almost reminiscent of Coldplay’s “Midnight,”  who was equally criticized for abandoning a beloved, signature style.  Despite the folk-rock departure, “Believe” exhibits a musicianship that is much more mature and refined.  It reveals a whole other end of the musical spectrum that many of us didn’t think Mumford & Sons was capable of dominating.

Mumford & Sons’ third album, “Wilder Mind,” is expected to be released May 4th of this year.