DETAILS FOR NAACP presents Showtime at the Apollo

NAACP presents Showtime at the Apollo

Chris
Events
Comments Off on NAACP presents Showtime at the Apollo 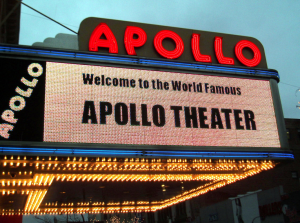 Come to Heritage Hall in the HUB this Friday to see whole whack of different talents; ranging from singers, rappers, dancers, and everything in between! This shin-dig has the makings of a really amazing show.
This even is in essence, a talent show, with a crucial twist. In the spirit of the hit show, “Showtime at the Apollo”, the audience has the chance to BOO off stage any acts that they think aren’t getting the job done. Lets get real, how many times have you been at a show, pissed that some wanna-be Dane Cook or some pre-pubescent punk-rock band is beefing their set and wasting your time? Haven’t you ever just wanted to yank that jabroni off stage with a giant cane? Or maybe hurl obscenities at them until they’re so overwhelmed that they run of stage crying? Yeh that might actually be a little extreme, but I digress. This opportunity to have your own impact on a concert is the chance of a LIFETIME!
That said, the amount of talent I know of performing at this thing thus far is incredible. A couple dance teams will be displaying pelvic gyrations that would make Beyonce want to switch to ballet. On the music side we’ll start off with a State College band, Memphis Hat providing a funk-tastic blues jam, fully equipped with strobe lights and good vibrations. Performing solo, you’ll get to see Maura Westerlund blast her golden pipes, Topher Stephenson pretend that he’s black, and see one of the few white rappers in State Collage spit some furious rhymes. Realistically, I don’t foresee there being much to “BOO” about, but its still bound to be a good time. Come scream some shit.