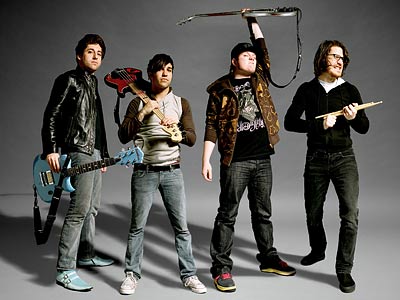 Fall Out Boy has been secretly busy.

After releasing their 5th studio album Folie à Deux in 2008 and a greatest hits album Believers Never Die in 2009, the band went on a hiatus, leaving fans confused and wondering if it were a forever kind of thing.

But the boys are back, and have been busy surprising all with their newest album in over four years, Save Rock and Roll, which was officially released April 15th.

However, with the flop of Folie à Deux (their lowest-selling major label album) reactions towards Fall Out Boy’s new and bold-titled work have been lukewarm, and sort of skeptical.

In my opinion, I think the band is simply back to taking risks. I believe they’ll never make the kind of music that can be heard on their first albums with hits like “Grand Theft Autumn” and “Sugar We’re Going Down,” but that doesn’t mean the band is incapable of making music that is enjoyable. They’ve breached their past style and sounds, and it can be hard to accept the change. Lead singer, Patrick Stump, carries Fall Out Boy’s newest-catchy tunes far and wide with his incredible, elastic voice.

Save Rock and Roll has some strange collaborations, such as the remix to their first single “My Songs Know What You Did In The Dark (Light Em Up)” featuring 2 Chainz, and other vocal appearances from Courtney Love, Elton John, Big Sean and Foxes in album tracks.

These songs are compelling and unique, to say the least. They glide instead of thrash. It’s an uplifting album with songs that can get you on your feet and reflect nothing but the recharged positive outlooks of the band and its members. Whether or not Fall Out Boy is saving rock and roll is up for debate, but as far as the band is concerned, “you are what you love, and not who loves you.”