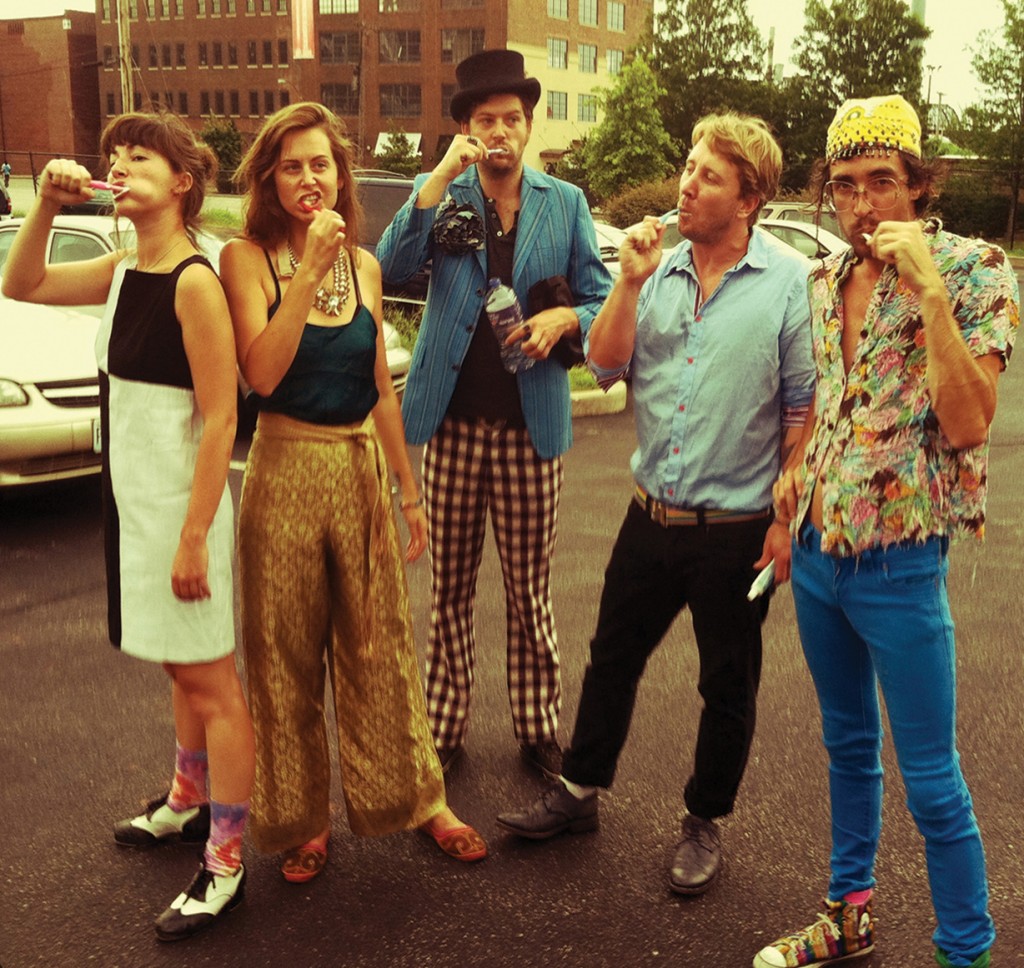 He’s My Brother She’s My Sister is not your ordinary band. For starters, you may notice that they do not have a conventional drum kit and drummer, but a tap dancer atop a bass drum playing a snare, tom and crash. You may also notice the wild outfits and embellished movements of the stage’s occupants. You may even catch a bit of banter between band members and some interesting crowd interaction. But beyond the bizarre, the colorful, and the novelty, you find an incredibly talented band doing what they love: entertaining.

HMBSMS is a band from L.A. who’s tough to nail down to a particular genre. They’ve been self-described as “flamboyant folk,” “psych-acoustic,” and “vaudeville-y.” I suppose it’s easiest to lump them into the folk class, but that’s neither here nor there. You can be sure that their music is as fun as it is unique, a perfect soundtrack to a bourbon-fueled night of debauchery.

I gave Rob (vocals/guitar/percussion) a call yesterday and spoke to him about the band’s beginnings, latex pants and Neil Young:

You guys come from different arenas in the performing arts, can you tell us a little about what you were doing before He’s My Brother She’s My Sister and how it’s manifested into what you are collectively today?

I was in a band, Lemon Sun, a psychedelic/rock/Americana kind of sound that played around L.A. and toured a little bit. So my background is playing in bands, touring, and song writing for other artists.

Rachel [Kolar] and Lauren [Brown] both met while they were at NYU, and later started a theater company called Post Fact Productions. So they began working on avant-garde theater in L.A. They had this idea that they wanted to bring free art to the people. So, they would find sponsors to put on plays so that people could enjoy theater of a bizarre nature, and it would be of no charge to the public. So they both had the theatrical background, Lauren also, of course had the dance background and training.

Oliver Newell, our upright bass player, he does a lot of composing, things like string arrangements, producing electronic music; he’s remixed some of our songs, and has also appeared in one of [Rachel and Lauren’s] productions, in which the opening dance sequence was Oliver in gold latex pants, which was pretty wild.

Aaron [Robinson] has been playing in bands around L.A. for a while. He’s played with Akron/Family and Sea Wolf.

How do the band mate’s varied backgrounds add to your live performances?

Well, we each offer a little taste of something different. Lauren as the drummer and actress, she’s very expressive in her performance. You’ll see these wild emotions come over her face, these embellished movements which brings theatrical presence. And Rachel, also being a theatre actress, develops a different persona with lots of colorful outfits.

But speaking to our energy on-stage, we really like to ad-lib and sometimes that turns into a humorous little exchange between myself and Rachel or the between the other band members. So we always try to provide a little more than just the music to the live shows.

Speaking of Lauren, your tap-dancing drummer, how does she pull off such a high energy performance for the duration of a set?

That’s a great question [laughs]. We’ve actually had a couple nights where she literally just had to walk off. And we’re like “Oh, where’d Lauren go?” and she would just have to go catch a breath. But I think it’s the practice. The more she does it, the more we tour, the more endurance she gains. We also always try to take a day off once a week and try not to do more than 6 shows in a row; to keep our stamina up. 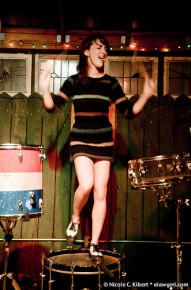 Was there a point when you said to yourselves, “Okay, we have something here” and put your other projects on the back-burner?

Well it was kind of a gradual thing. We had really great touring opportunities with [Edward Sharpe and]The Magnetic Zeros, My Morning Jacket, The Devil Makes Three, and The Blow. It was all about the opportunity. I had been working with Lemon Sun, really pushing that hard, hoping to get the same things as we’re getting with He’s My Brother, and side projects were really just about having fun.

But all of a sudden, doors just kept opening. So everyone just got really interested without us really forcing it or pushing it too hard. Obviously now we’re on the road and working our asses off, but it’s still fun. And it’s become more of our full-time thing, which we’re all excited about. It wasn’t exactly part of the plan but something that just developed over time.

One day we realized “Oh god, we’re touring more out of the year than not” and fell into this sort of thing where we said “this band is starting to take off.”

You’ve shared the stage with some amazingly talented artists, so far, who were your favorites to play with and why?

Lately we’ve been doing our own headlining tours, and had some great bands we’ve brought along. We just did a bunch of dates with Shakey Graves out of Austin, Texas, this one-man band. He’s literally playing the kick-drum and tambourine with his feet while he plays this amazing amplified acoustic guitar. He plays open tuning, so he has these amazing guitar riffs and he’s also got this amazing voice, so he’s definitely one of our favorites.

We’ve done some shows with Amanda Jo Williams, who is like a freaky, Georgian, country-gal who’s got quite an array of bizarre musicians supporting her. Her music can almost be described as southern-pyschadelic-children’s music, maybe? She’s got this squeaky little voice and her music has this deep rumbling psycadelic sound, so she’s really cool.

We’ve played the last couple dates with Spindrift, who we love. They’re a band from Los Angeles that really influenced us in the beginning. So they really inspired us to approach a kind of cowboy-western, desert sound/vibe.

Speaking of the style of music you play, where do you guys see yourself fitting into the ever-evolving music industry?

People kinda lump us into the folk movement that’s happening, you know, bands like Lumineers, or The Magnetic Zeros or Mumford and Sons. I think people recognize that we have as much in common with them as we do with The Velvet Underground or X or even punkier bands. So our approach has been to look at this new movement in folk and bring something new to the table. Maybe we could be a little bit raw-er, edgier garage style and maybe not be as precious or as produced sounding as some of the other folk acts making names for themselves. We like to mix in elements of phsycadelia and bring a heightened social and political message beneath the fun we like to have.

So you’re trying to bring a DIY, grittier nature to folk…

Yea, and that’s where we’re at now. All bands evolve. I mean The Talking Heads started out as basically a post-punk band and then evolved into this huge, almost world/fusion/pop.

So I’m sure we’ll move onto new paths.  I think the new album is going to venture into some new realms. We’re definitely looking into the darker side of things, maybe make things more bizarre and adopt this sort of carnival/side-show vibe and embrace the weird side more than other folk bands out there.

What can we expect to hear our your debut LP, Nobody Dances In This Town?

I think this album is the best representation, recording-wise, of what we’re really trying to do. Thom Monohan produced it. He’s a really great producer who worked a couple records with Andrew Vanwyngarden (of MGMT), who we love and been inspired by. He’s worked with a lot of great people, lot of cool indie bands that we like. So he really has a wide spectrum of what he can do.

We recorded most of it in three days, all live. We would do maybe three or four takes of each song with most being cut on the floor, all together. We over-dubbed some vocals, add some harmonies, but a lot of the music on that record was recorded in one take in that Bob Dylan style where you just find that groove. Even if the tempo sways a little bit, you just have that feel that’s reminiscent of the live show. 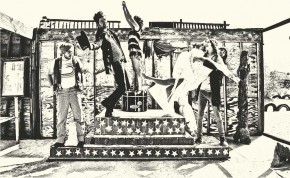 Austin City Limits is jam-packed with awesome shows this year, what acts would you most like to see this weekend?

I know I might not have time but part of me really wants to check out that singer from New Zealand, Kimbra. I’m not usually much of a pop fan, but she’s so weird and her voice is so unique and interesting that I’d really just like to go see what she’s all about.

Yea, I just saw Neil Young with Crazy Horse and The Black Keys the other weekend in Central Park, it was amazing…

Yea his voice, there is just something so haunting about it… I can’t wait. The Black Keys will be great, and they play the Bud Light Stage, so it will be cool to hang out with [Dan Auerbach], hopefully.

What does the future hold for He’s My Brother, She’s My Sister?

Yea! Bring it on! We’re hoping to get to other parts of the world. We’re still covering America but we’d like to get to Japan, Europe, find some good labels there, help spread the word across the globe. We’d like to get this album out there, let people hear it, share it with their friends and hopefully become a staple in someone’s record collection.

He’s My Brother She’s My Sister’s debut LP, Nobody Dances In This Town is available now on iTunes and Amazon.