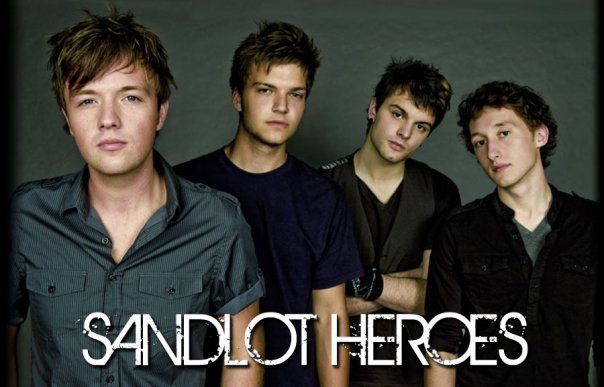 Sandlot Heroes have been making music in my home of the Lehigh Valley since right around the time that I first started play guitar, and I’ve always been a big fan. Realistically, you could probably find me rooting for any local band that sounds half decent and puts on a good show, but over the last couple of years, these guys have really upped their game. Sandlot Heroes (briefly known as the Trace before switching back to the original name) is officially making their transition from one of those bands that you really wish could make it out of your hometown and onto the rest of the world, to a band that is actually doing it. In the midst of touring all over the place, and opening from huge acts from Saosin to Jason Derulo, the band has released a slew of awesome tunes and videos that scream out for mainstream pop-punk recognition, but still have the musical quality and integrity of a group that is writing music they’d want to listen to.

The guys are busy as hell right now, but we managed to get an interview out of them during their downtime. Cheggitout, and make sure you watch their newest video!

SITR: Give us some background on The Trace.. When/why did you get this band together. How did you all meet?

Jake had met Dan from going to shows around the Lehigh Valley area. Ans met those two from taking over as drummer when his brother (previous drummer) had to settle down. Chris responded to our add online as we were looking for a guitarist.

SITR: How did you come up with the band name? What happened to Sandlot Heroes?

We actually are named Sandlot Heroes again, we had to go back for a couple reasons, however we feel better being back.

I think we all like the style of lifestyle bands like Coldplay and The Fray, but still enjoy that pop radio influence here and there. Id say were a solid pop/rock…though I prefer the rock first!

SITR: What do you want your listeners to take away from your music?

What would make us happy is the fans and listeners can listen, ruminate on the lyrics, and take something out of it that pertains to their own life. Not so much as listening to our story, but being included in it with emotions about their life as well.

SITR: Tell us a little bit about your song writing process.

Well we all have different methods. I know Jake stays up until 4 am at his piano going over and over a melody and chord progression. Dan will record certain instruments with a progression and then experiment singing different melodies over it until finding the right one. Then all four of us come together and edit out parts we dislike until we all agree on something. That’s when the song really comes together and we then demo it out.

SITR: You guys have been at it for a while now, what would you say has been the best part of the experience?

The best part about everything so far is touring. It’s great being on the road in a new city every night because you get to meet so many excited fans that way.

So far our favorite show was probably Mayfair 2010 with Jason Derulo. There was a ton of energy crowded into that large tent that night.

As of now we are touring a lot in the Spring…April with Hawthorne Heights and May with Bowling For Soup. After that we hit the studio and record for the next couple weeks for a new release. We have a PledgeMusic campaign going right now where the fans can preorder it or get a bunch of other gifts when they pledge.

Occasionally there is some creative differences but we eventually figure out what is best for the song and keep pushing forward!

SITR: What do you think of the Atown music scene?

If you look at the Lehigh Valley as a whole, the scene isn’t as bad as it was a few years back. Now we are bringing in new attention with the larger venues at the Steel Stacks and the even bigger room that just opened at the Sands Casino. Its definitely growing. There are a lot of music hungry fans here.

SITR: Any advice for other musicians?

Focus on the song writing, it will be your most valuable asset.