Penn State Alum "The U" announced as opener for Kid Ink: EXCLUSIVE Interview 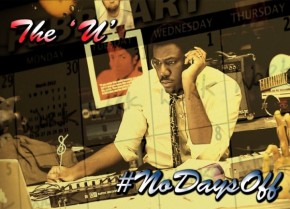 State in the Real has just been exclusively informed that Ugochukwu Onyianta better known as “The U” has been asked to be an opener for Kid Ink’s December 2nd show at Eisenhower auditorium. The concert was just announced today, and tickets are on sale now at http://www.KidInkTickets.com/.

During his time at Happy Valley, The ‘U’ was a heavyweight in Penn State’s Underground Music Circuit, and is now currently signed to Williamsport PA based record label “Dyhard Entertainment”. We talked about his excitement to open for Kid Ink, his musical inspirations and his dream collaborations.

What are you most excited about to open for Kid Ink?

I’m just excited to do what I do and share the stage with one of the hottest artists in the game hopefully we can set up a collab because my fans would go nuts if I could pull that off.

What does your love of music stem from?

I always loved music from a young age. I wasn’t allowed to listen to Rap Music as a kid so I would watch MTV and VH1 and become obsessed with Pop, Alternative, and Rock Music. Beck, Foo Fighters, Red Hot Chili Peppers, Blur, The Mighty Mighty Boss Stones, Meredith Brooks, Aerosmith etc were all in heavy rotations when I was a kid and when I eventually got into rap when I was older in Middle and Prep School, my world changed.

What are your musical influences?

What would you describe your sound as?

My sound/style is often classified as Alternative/Back-Pack/Hipster Rap. I just call it words like: undeniable, honest, real, eclectic, vivid, and original. I don’t sound like anybody and nobody sounds like me at the end of the day.

What inspires you to write?

Life, Sports, Pop Culture, Mainstream Culture, Race, Family, Love, Joy, Heartbreak, Pain, Struggle, Journey,Triumph, and basically anything I have seen or experienced in my brief time on Earth. I pray to make it to 90 like my Grandfather because there’s so much more out there for me to experience.

My sound is on another level right now and its both exciting and gratifying. I have amazing world-class producers like Crisis, Jungle Noise Productions, CinaMatics, Killa Kake, Oren Spiegel, and Tyler Barnes who have taken The ‘U’ sound to places I never would’ve imagined. My time at Penn State from 2009-2011 taught me how to perform, interact with a crowd, command a stage, and manage a following. The majority of my fans are comprised of people people from Philly & Pittsburgh thanks to my Penn State Years.

What is your favorite part about performing?

The energy and fire the crowd provides is probably my favorite aspect. As well as I absolutely love rapping my words. I write all of my own music and its all original so its straight from the heart and is an out of body experience at times on stage.

If you could collaborate with any one musician who would it be?

I have to say three people because I cant pick one, sorry! Kanye West who’s one of my biggest heroes and changed the rap game forever when he went from producer to MC. Wale who lit the fuse in me to start rapping and showed me its ok to love what you do and be yourself. And finally, Katy Perry. Besides the fact that I’m in love with her, shes got so much swag and she’s an amazing singer and artist and I know we would make a once in a generation type record if we got together!

We at State in the Real are tremendously excited to see The ‘U’ perform as an opener for Kid Ink, and thank him for this interview.

Check out The ‘U’ and his fellow artists from Dyhard Entertainement on their Facebook, Youtube and Sound Cloud!