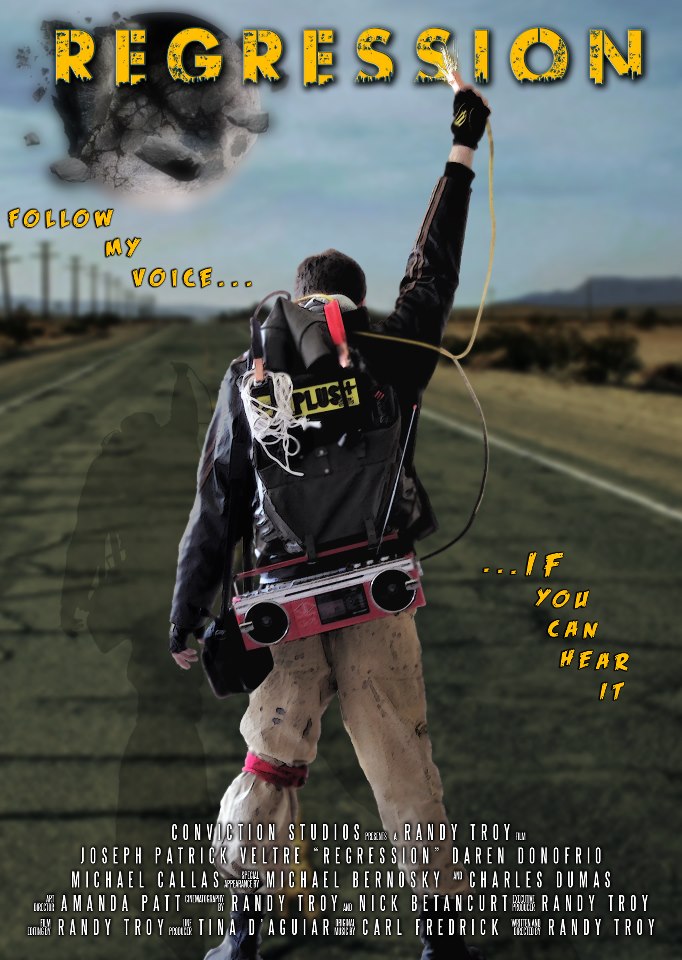 Penn State Alumni, Randy Troy, began working on Regression  as his senior thesis. In an attempt to finish what he’d started, Randy continued working on the film (amongst working on other projects such as the newest Batman) after graduating in 2011. Now that movie is now finally finished, and Randy plans on releasing it tonight via Youtube at 7:00PM. The movie is becoming something of a Hollywood Hot button, with rumors circulating that J.J. Abrams may have uhh borrowed some of Randy’s ideas for his new show, Revolution. We won’t get into the details, but you can check out more about that here. For now all you REALLY need to know is that its out, it was made by a Penn Stater using a Penn State cast and crew, and they all want you to watch it.

Here is everything you need to know before watching this new movie!

“The world as you know it is going to end today” was the message left by flavor of the month and contemporary revolutionary “Pierre Robes” in war torn 2013 right before “The Blackout” occurred. The moment when all the world’s electronics mysteriously stopped working: cell phones, televisions, cars, computers… everything.  Fast forward three months, and with power still not returned, gangs have risen, violence has spiked, and psychosis is spreading like wildfire across the younger generations. Now, when Leon Cromwell, former software engineer turned renegade, realizes batteries still work in this world void of power, he sets himself on an ambitious journey to find out exactly what caused this event by means of deciphering a message mysteriously feeding to his radio. When he realizes the message is from Pierre Robes, the man who predicted The Blackout, his search earns focus. Leon learns that Robes has taken over one of the municipal buildings of a nearby town and sets out to find him. He fights his way to a confrontation, hoping for closure on this new way of life.

The inspiration for the movie:

The first draft of Regression was written September 7th, 2010. I had come up with the idea for the film some months prior due to having my phone stolen and living in the era we’re in now on and off without a cell phone for three months. Realizing how dependent and reliant we’ve become on technology really struck a cord and sent a flurry of images my way. I mean, I grew up in a household that still had a rotary telephone until I was five, and look at us now. Everything is computerized. Take that away, and what happens? What happens when all the glamour is gone? There’s a potential for violence, looting, and psychosis galore. When I took those elements and tossed in a taste of satire, the film wrote itself.

I finished a version for Penn State in May of 2011, but I was never really done with the film. There were a lot of pieces that needed to be straightened out, mostly technical, and not thinking time was of the essence, I kept perfecting what I could, taking industry jobs and working on it during and in-between, but I can safely say that it’s completed now. Two years in the making. And considering that I’m in the infancy of my career, until I finish my next big project, Regression is really my life’s work. To have that usurped from me is something I can’t really express in words. But my film is finished, and that’s what’s important here. I can’t wait to show everyone. Stay tuned.
What makes this unique from other sci-fi blackout movies?
What makes this film unique is that, aside from Revolution, there’s really never been anything like it. There’s a million love songs out there, but each has their own take, and their own lane. This film has always intended to hit on the technological revolution we’re living in right now. This time period. Years ago, a film like this would have been brushed off as idiotic or foolish. The attitude has changed towards blackouts. It used to be, “Light a candle, and shut up.” Now even a five minute blackout induces chaos. This isn’t a zombie film where the power lines were crashed into by cars, or a film where the space station loses it’s power and the astronauts have ten minutes of oxygen to get off the Moon safely. There’s no plague, no magical forces, no cliches. Just real people trying to learn how to survive in a world without power. There’s a satire element to all of it as well.
Stay tuned for the release information by following the Facebook pages for Regression and Conviction Studios