Perfect Pop: "With Ur Love" by Cher Lloyd & Mike Posner

Chris Will
Mainstream Music, Music
Comments Off on Perfect Pop: "With Ur Love" by Cher Lloyd & Mike Posner 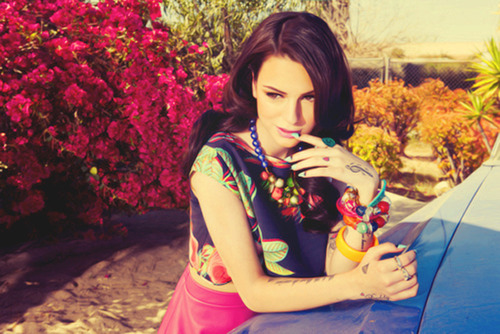 Cher Lloyd is the rebellious brat of mainstream pop, and that is by all means a compliment. Cher rose to prominence after finishing fourth in the seventh season of the UK’s The X Factor. She mesmerized The X Factor’s judges and audience with her exceptional talents in singing and rapping, as well as her feisty, youthful charm. She channeled that attitude into her debut single, the UK chart topper “Swagger Jagger,” a loud, stick-it-to-the-haters piece of club music. Though the single was more than fitting for the young, mischievous pop vixen, it was met with harsh reviews due to its “less-than-satisfactory sound and lyrics.” Cher refused to let her critics bring her down, and followed up “Swagger Jagger” with an entire album full of the same kind of sugary-sweet guilty pleasure pop, aptly titled Sticks & Stones. The debut was released last November in the UK and is slated in the US for this coming October.

Why is Cher Lloyd pop’s rebel brat? One need only take a look at her worldwide smash, “Want U Back,” to see that she doesn’t play by the rules. She takes the guise of a territorial and psychotic ex-girlfriend, interweaving pouty whining with harsh, constipated grunts. The track is purposefully shallow, completely off-the-wall, and more than a little obnoxious. Yet, somehow Ms. Lloyd finds a way to make it undeniably catchy and fun. “Want U Back” currently lounges comfortably in the Hot 100’s top 20, foreshadowing a promising career for the teenage songstress. So what could be Cher Lloyd’s next big hit? Let’s turn to her single “With Ur Love,” another UK smash and a hopeful for the Sticks & Stones US release. Featuring American crooner Mike Posner, “With Ur Love” is more than catchy enough to secure Cher a second Hot 100 hit.

This bubbly, cotton candy serving of untempered synth-pop finds Cher Lloyd reigning back the sass and turning up the cute factor. The hooks reel you in from the start, as Ms. Lloyd’s playful “da da dum” gives way to a ditzy hip-hop beat. The songwriting has a cool push and pull aspect to it; we see that Cher is head over heels in love, despite her efforts to resist falling for the man in question. There are a few sparks of musical genius scattered throughout “With Ur Love,” particularly when the build-up in the pre-chorus rises into the chorus. Every piece of the song comes together as Ms. Lloyd joyously declares, “cause you got me…flying,” sending the melody and instrumentation skyward into a fluffy cloud of harmonies and keys. Posner’s feature is brief and sophomoric, filling up the majority of the bridge. His flirtatious lines verge on being cliché, but still fit well within the confines of such a juvenile and lighthearted love song. “With Ur Love” has yet to be released in the United States, but hopefully it will grace America when Cher Lloyd drops the US edition of Sticks & Stones.