DETAILS FOR Ponter/Kristobak: A Fresh Outlook on Penn State's Future 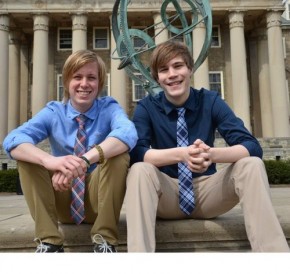 As Election Day for The University Park Undergraduate Association approaches this coming Wednesday, March 28th,we caught up with Presidential and Vice Presidental candidates, Evan Ponter and Ryan Kristobak.  Appropriately, we met at the heart of campus, The HUB-Robinson Center, on the back patio, reflecting over the campus during a time of change.

For those unfamiliar with UPUA and its structure, it is the overall undergraduate student-governing association of The Pennsylvania State University.  The organization is comprised of three boards: The General Assembly, The Executive Board, and The Board of Arbitration. As per the UPUA website, the General Assembly is defined as “the legislative branch of the government and is responsible for deciding the business of UPUA.”  It is overseen by the Steering Committee that governs Academic Affairs, Internal Development, Governmental Affairs, Student Life & Diversity, Programming, and Facilities.  The Executive board is comprised of the President, Vice President, and Directors.  Finally, The Board of Arbitration “oversees matters of dispute between entities and matters of rule and equity within UPUA and student organizational conduct within the UPUA”.

SITR: What is the main reason or revelation that made you want to run for UPUA?

Ponter & Kristobak: For a long time (being writers for OnwardState) we’ve attended UPUA meetings, met with various organizations, and administration. And a lot of the time they all led back to UPUA, allowing us to become critical.  However, as we learned more about UPUA we realized that criticizing can only get you so far and until you work towards a solution, you can’t get the desired outcome you want.  So eventually, we decided rather than appointing someone to express our ideas, we should step up and take the opportunity to run.

SITR: Do you think your viewpoints were even stronger during this year?

Ponter & Kristobak: Yes, especially throughout the whole scandal.  We were just like everybody else, standing out on old main holding signs and protesting.  We felt that UPUA and our administration were not doing a good job of giving the students a voice, so we had to take matters into our own hands.

SITR: Have either of you held positions with UPUA/CCSG previously?  What is your previous involvement with student groups outside of UPUA?

Ponter & Kristobak:  Neither of us had been involved in any governmental function inside of Penn State before.  However, we’ve both been writers for Onward State the past two years.

Kristobak: I’ve been involved with THON.  I did the Rules and Regulation Committee and then was chosen as Security Leader and THON Editor for Onward State.

Ponter: I’ve been involved with activist groups, like Occupy Penn State.  I worked with Teachers and Administration to get the point across that The Occupy Movement wasn’t just hippies sitting around inside the HUB, it was average students, just like me.

SITR: Your platform, similar to the Lennartz campaign, promises transparency and continued support of the 6S4C, how specifically will your efforts to improve communication be different from Lennartz?

Ponter & Kristobak:  Lennartz’s campaign talks about the TJ Bard movement: Six Steps For Change and yes, they’re great.  But we’ve seen no actions towards accomplishing those goals.  So we want to set up something called “The Progressive Student Union”.  This group would be under UPUA and open to any registered student organizations that can appoint a student to be on the board.  So all student organization’s will have the opportunity to voice its opinion and accomplish change rather than a long beaurocratic process only inside of UPUA.”

SITR: All of the other candidates seem to share the opinion on the need of more communication, not only with administration but with each other as well.  For example, candidate Lennartz has proposed an online communication program for all students.  Do you have any programs like this?

Ponter & Kristobak:  Yes, we want to create a Communications Network as well through the UPUA website.  Right now the website is bland and most of the language is in governmental gargin that is difficult to understand.  First, we want to make this webpage more accessible and easier to comprehend.  We’d also like to utilize the Press Secretary to write up exactly what were doing in a newsletter and have a commenting tool.  Rather than building an entirely new website or system like some of the other candidates have suggested, we would like to utilize the existing tools and re-vamp it to make it more student-accessible.   We also want to get students outside of UPUA to assist with this initiative.

SITR: Your platform online seems to be lacking with how you will specifically follow through.  What are you initiatives and programs and if we cannot find them online, why should we vote for you guys over Lennartz and Quinn?

Ponter & Kristobak:  This week we’ve been working hard to add to our platform and meet with many different student groups on campus.  And it’s been great because we’ve shot ideas back and forth with these groups and really have found out that some ideas are great and others are not.  Two initiatives we are focusing on are: The Progressive Student Union (mentioned earlier) and The Student Financial Office (an area where students can come in and get advice on financial information as well as a watchdog over the administration and their spending).  We’d also like to focus on lowering tuition and trying new things other than going to Harrisburg every year.  We can keep doing that but we need to be more open to trying new things.

SITR: On your Facebook page, you mention integration of foreign students as a goal and you have met with the African Student Association and the Kazakh Student Association.  This is something we have not witnessed any other candidates doing.  Do you have any programs or initiatives geared toward this goal?

Ponter & Kristobak: Our event tomorrow, “Who is Penn State?” (http://www.facebook.com/events/268797593206148/) (Thursday, March 21st), is a talent showcase open to everyone, geared towards getting different groups of people from Penn State together. It’s all about getting different people together who make up Penn State.  We also want to create a forum for these different groups to come together.  Diversity is not something that just needs to be talked about, we want to cultivate it.  We are also looking into the freshmen seminar course structure and would like to either create a new course or re-structure the class toward transfer and international students.

SITR: As friends of the Songwriters Club, Asylum and Soma, I’m sure you’re aware that PSU students and orgs are not content with Penn States outlets for original music. This website has interviewed musicians from other universities who have been provided with facilities to store equipment, practice and even perform. At a school that gets such large amounts of funding for other extra curricular activities, do you think there should be more (or any) allocated towards original music? What initiative would you take to move this in the right direction?

Ponter & Kristobak:  It’s interesting because I play drums in a band and I had an experience where I attempted to store my drum set in the music building and while doing so they asked if I was a music major, when I replied I was not, they told me that only music majors could store their instruments here.  We definitely want to look into why we can’t have more public space for music or why we can’t share the space in the music buildings.  Also, another music-driven initiative is breaking down all the red tape that is currently in place to reserving venues to play shows and hold events.

SITR: Ponter: As a writer and an individual, you’ve been known to publish offensive statements, some would call them radical. We won’t ask you to defend your actions, but do you believe these negative statements paint an accurate picture of your persona? Or are you worried that you’ve skewed voter perception of your identity in an attempt to get noticed as a journalist.

Ponter: It’s not that I was trying to be controversial.  I was mostly disgruntled by how things were going down around campus as well as the way a lot of other media outlets were covering stories.  At Penn State, they’re pretty hands-off, for example, if there’s under-age drinking going on “we can’t mention it”. So yes, I have said some controversial things, maybe even radical, but the point is I was just trying to open the door for other people to be less conservative.  And I think that a good leader should sometimes lead people into controversial areas, especially at Penn State where things are pretty conservative.  Also, looking back on things that I’ve said, there have been some that I wish I thought more carefully about.  But as a college student, I am still learning and growing.  And I have always tried to grow as a person through dialog and my writing.  On the voter perception: I urge people to come talk to us and talk through our opinions together in a constructive manner.

SITR: On a lighter note, if you win, who gets your pres/vice presidential endorsement as best PSU music act?

Ponter & Kristobak:  Well were pretty biased because Ryan is the drummer for Chewi, plus he wrote our campaign song: “Peace and Love Creates Progress”.  So that’s definitely a tough one…

In closing remarks from the guys: Please check out our facebook, twitter (@ponterkristobak), events, and most importantly vote on March 28th.  Even if you don’t vote for us still come out and vote because there has never been a better time for students to take control and get involved.

Coming out of a scandal, the re-structuring of an entire board of trusties, and the re-branding of one of the nation’s oldest and largest schools, Penn State is entering a new era that may require something that does not reflect our past.  So next week, when you go to vote for your new student President of the University’s largest student-governing association, you will have three options:

So I ask you this, as Penn State’s next move is watched by the world, what student leader will you choose to get us in the right direction?