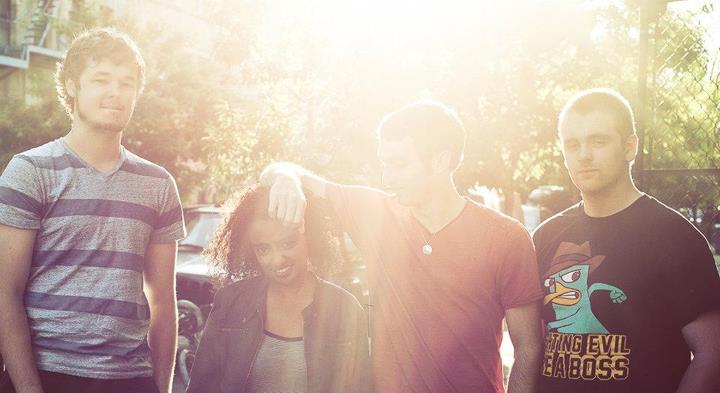 Flashback Forward might be sewn together with people from central Pennsylvania to New York City, but the four Penn State seniors are well on their way to taking over the east coast and beyond.  Made up of vocalist Tyler Ringland, guitarist Aida Mekonnen, drummer Elliot Frost, and bassist Zach Johnson, the quartet became initially acquainted through mutual friends, musical interests, and Facebook.  They began meeting up for casual jam sessions and very quickly found an identity as a band.  Their sound molded into a rough and murky variety of alternative rock, and their helter-skelter band practices began to take shape into solid compositions.  From there, they officially formed as Flashback Forward, and since then it’s been only onward and upward. 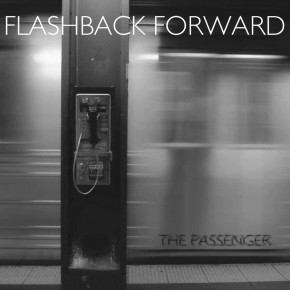 Flashback Forward hit their big break when they were invited to record their debut EP in New York City’s prestigious recording studio the Engine Room, which has seen the likes of platinum-selling artists such as The Killers and G Unit.  They utilized this exceptional opportunity to the fullest, and during their time there crafted a lush, striking 5-track debut.  They graced their fans with the finished product, titled the The Passenger, on August 1st.  The Passenger displays a glossy album cover (shot by famed film director/photographer Sean Babas) and an even glossier slew of tracks inside.  It’s difficult to label The Passenger as a single genre.  Rather, it plays out like a melting pot of genres, flaunting ample tastes of new-wave grunge, modern indie rock, 90’s britpop, and more.

The Passenger kicks off with the track “Dissident,” a full-fledged slice of hook-laden grunge-pop skirting the line between Blur and The Black Keys.  Aida’s thick, crunchy electric guitar surges forward as Zach’s slick and steady bass line adds an undercurrent of dark sensuality to the song.   Elliot’s irresistible foot-tapping drumbeat bounces underneath Tyler’s mocking tone, intertwining cutting lyrics with smooth melodies.  “Dissident” stands out as my personal favorite, particularly with the way the chorus brims with that fun, danceable rock sound.

“Surrender” opens with a sinister electric guitar, slithering across a desolate landscape of clinking keys and hazy synthesizers.   The drums echo like thunder in the distance, and when Tyler’s foreboding vocals slide into the chorus, his voice expands into an entire choir of ominous voices chanting, “Surrender, surrender your pride, surrender your mind.”  “Surrender” has arguably the best introduction on the EP, especially when that second guitar growls like a hungry beast.  I was begging to hear that again.

“The One” is a straight throwback to the Nirvana/Weezer era, where the 90’s music scene flourished with grunge and garage bands.  The discordant beginning erupts into a hodgepodge of gritty, heated vocals and rowdy instrumentation.  Aida takes center stage in the bridge, tearing up the track with her skittering, devilish guitar solo.  Tyler gave his vocals just the right amount of edge in the chorus, and that in turn gave “The One” the extra kick it needed to keep my attention.

“XIX” is the most intimate of all the tracks on The Passenger, as Tyler looks inward and contemplates his worth as a human being.  He deliberates his surroundings amidst gently pulsating guitars, clicking drumbeats and a grave bass.  His voice strains as the verse elevates into the chorus, kept aloft by Aida’s strong harmonies.  Just as the bridge begins, “XIX” escalates into a punk-rock frenzy, punching through the remainder of the song with fervor.  I found “XIX” to be one of the most eccentric tracks on the EP, particularly with the powerhouse ending.

“Parasite” closes out The Passenger on a beautifully haunting note.  A lonely piano sings sorrow while ambient waves of synthesizers gently lap against Tyler’s stunning melodic grief.  The stark, gorgeous instrumentation reminded me of some of Coldplay’s darker works, and the tuneful command in Tyler’s voice stirred visions of a younger Chris Martin, especially in the chorus.

All in all, I found The Passenger to be a delightfully striking collection of music, one that I am proud to blast from my car speakers and iPhone earbuds.  If this EP marks only the beginning of Flashback Forward’s musical career, then I’m definitely looking forward to seeing where the band goes from here.

If you’d like to know more about Flashback Forward, be sure to check out our interview with them here.  Also, follow their Facebook and Youtube pages to stay up to date on the band’s music and news, and purchase their songs on iTunes and their Bandcamp profile!  Finally, make sure to head over to Darkhourse Tavern on Wednesday, August 29th to see the band perform with fellow talented local musicians Brethren!