Chris Will
Mainstream Music, Music
Comments Off on Rebecca Black Attempts To Break Out Of "Friday" Mold And Almost Kind Of Succeeds 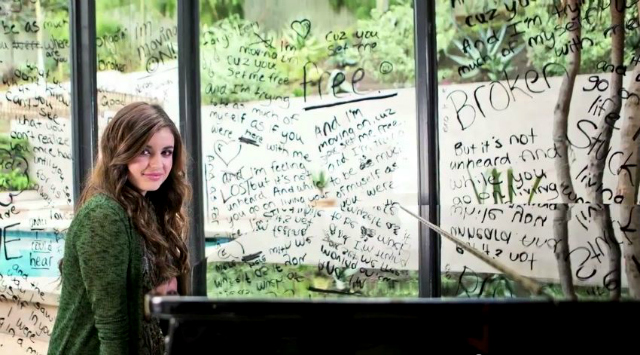 If you have any off-the-wall interest in following the “musical career” of Rebecca Black, then you’re aware that she’s actually sort-of done stuff since that whole “Friday” fiasco. Her three follow-up singles, “My Moment,” “Person Of Interest,” and “Sing It” were all about as awkward and overdone as “Friday,” but void of the inescapable-hook-that-should-have-never-been that made “Friday” such a…hit. Well, believe it or not, Black has ANOTHER song out. And believe it or not, it’s actually not AS bad as her earlier songs. It’s called “In Your Words,” it’s surprisingly serious, and it definitely poses a few slightly-less-than-pressing questions: what’s the deal with this girl? Is she going to keep trudging along despite all the hate, in order to establish a musical career for herself? Does that make her foolhardy or inspiring?

The first relatively-striking thing about “In Your Words” is the song’s composition and sound. There’s a coffeehouse-rock style to the track, bridging on what sounds like Taylor Swift-ish country pop. Another notable feature of the track is Black herself. Her voice, though certainly not refined, is definitely a bit more tuned up than it has been in the past. While that may be just a recording gimmick, it’s a recording gimmick that works, because the song is certainly listenable. Finally, “In Your Words” has some pretty heavy songwriting, at least for a pop artist of Black’s caliber. Black may not have written the entire song herself, or at all, but props to her for acquiring the lyrics regardless.

Not to say that “In Your Words” is anything extraordinary or mind-blowing. But then again, there have been plenty of less-than-talented female artists that have established careers out of less-than-impressive breakout hits (BUT SERIOUSLY THOUGH). Therefore, there may be a time in the near future where Rebecca Black is seen as a legitimate artist. That may take a few years of fine-tuning and vocal lessons, but it doesn’t seem too far off, especially after hearing “In Your Words.”