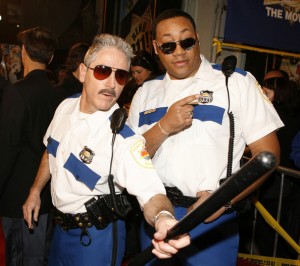 An Evening with the Stars of Reno 911! featuring Carlos & Cedric

Come out and laugh until you cry with Officers Garcia and Jones from Reno 911! on April 8th in Alumni Hall! Carlos Alazraqui, Garcia, and Cedric Yarbrough, Jones, are well established and high-energy comedians with a travelling show that has been to over 25 college campuses this year alone. With experience that spans much farther than Comedy Central’s hit TV show, you are sure to recognize some of their comedic gold. Cedric has starred in many films including 40 Year Old Virgin, Meet the Fockers, Get Smart, and the TV show the Boondocks. Carlos has done many recognizable voice overs such as Rocko from Rocko’s modern life, Mr. Weed from Family Guy, and the Taco Bell Chihuahua.

Their years of experience translate into a show that will keep you begging for more. Combining stand-up comedy and audience participation, it is sure to be a one hour-long performance to remember.