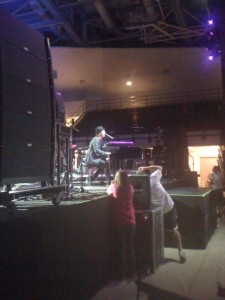 Hats off to SPA for tonight’s event! They managed to get Gavin Degraw, David Cook and Carolina Liar to come to PSU’s Rec Center for the first stop on their new tour, AND they tied it together with an awesome program that got everyone watching geared up for homecoming weekend.

It started off with a dance competition between some of the best student dance teams that the SITR teams has ever witnessed (Ram Squad not included, bummer). Due to our lack of dance expertise, we’ll hold off on any type of formal review. But we will say that while Whip-Lash (a female hip hop group with what looked like 1000 members) definitely put on a show worthy of the win they took home, the belly dancing easily deserved some type of medal, or at least respect knuckles from everyone in the audience for their ability to gyrate their hips in true Shakira fashion while balancing swords on their heads.

As for the music, everything sounded awesome. Carolina Liar got things moving with some great tunes that blend a simplistic sound with a whole lot of energy. The only hiccup came around when the front-man decided to lend the microphone to the audience for the chorus of their better known songs, and learned the unfortunate yet crucial difference between people who’ve heard your song on the radio and people who’ve listened to the lyrics. Other than that it was a great performance.

David Cook was fantastic. Having not kept up with American Idol much after half way through the second season, it was refreshing to learn that not everyone who wins shares the same fate as Ruben Studdard. The backing band wasn’t pulling any punches either, the entire set was well polished and the every vocal harmony was on point. Although he basically tore his jeans in half during the performance, it in no way affected his ability to rock out.

Finally, Gavin Degraw took the stage and sounded even better than he did on the headphones of the kids who had too much homework to come out tonight. It was really incredible, and the audience was roaring the entire. All in all it summed up as something we haven’t seen at PSU without a $30 + price tag in a while now, a solid rock show.