Last Thursday night, Nashville-based rock group Those Darlins performed at Chronic Town- that little hookah bar and hangout on West College Ave. They played an energetic, fast-paced concert with a sense of intimacy that is hard to come across in the Penn State music scene, and quite honestly, I can not think of a better way to have spent my weeknight.

Video: Those Darlins – “Screws Get Loose”

Before the show, while taking a quick look at a set list on stage, I feel a looming presence close behind me. Sure enough said presence is Jessi Darlin, lead vocalist and guitarist of the Darlins, reading her set list along with me. As I turn she looks up at me for a sec- she is not tall- and gives me a quick smile. I, being a person incapable of spotting comedy in a situation until it is long over, retreat slowly back to my friends. I take solace in the fact that the exchange was probably more awkward for me than it was for her.

I also messed up with one of the other Darlins in case you are interested. Nikki Darlin (guitar, vocals) was in the midst of conversation when she made a quick motion with her hand, in turn giving me – just passing by – a nice jab in the gut. Again, probably not a big deal to her, but I’m a headcase so I’ll probably remember it and laugh for a while. So there is all that.

But my uncomfortable life aside, lemme tell you: Those Darlins were pure fun. They had the crowd going, they made us all laugh, and they jammed with the heart and adeptness that is so characteristic of Nashville-based rock groups. 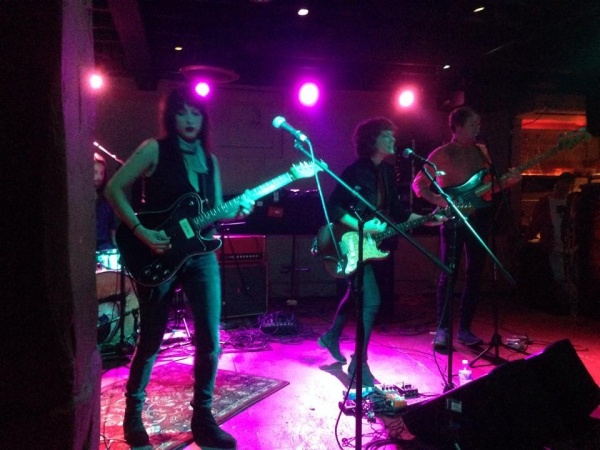 Those Darlins come out of the gate with “Screws Get Loose”, a nice garagey tune about pills and doctors and all that good stuff. It’s is a great opener for many reasons- it is the title track and first song of their sophomore album- but it’s also simply a jam, one that has gotten lots of play on campus radio in the past few weeks.

As the show continues and Jessi gets the feel of things- this only takes her like two songs- she begins making prolonged eye contact with members of her audience, her gaze moving slowly across the entire arc of the stage. With eyes bugging out, she strums while looking directly into your soul with focus and determination the likes of which you have never seen. She then moves to the next person and repeats the process. The effect is hilarious: the victims of Jessi’s stare chuckle uncomfortably as all of his/her friends laugh and make fun.

Jessi and Nikki also join the audience at multiple times during the night. In one instance, Jessi Darlin steps from the stage to the crowd and sings lyrics directly to her fans, employing the same bulging stare described previously. Further into the show, Nikki and Jessi jump into the crowd and dance with us as they take turns soloing. This interaction gives the production a rare sense of intimacy- especially so when it comes to State College shows. Those Darlins are using Chronic Town’s small setting to turn the show into something very special- and the crowd greatly appreciates them doing so.

The highlight of the night is hearing “That Man” performed live. The sad, alt-country, anthem comes from the 2013 album Blur the Line, and features tragicomic lines like “I got my share of men / I don’t want none of them.” These words come between bluesy solos that could bring the post-breakup feels out of anybody, recently single or not. Jessi also takes this song as an opportunity to show her theatric range, adopting a high-pitched psycho-cutesy voice and treating the whole song like a conversation between her and the crowd. We all love it, and are even more delighted when Jessi comes off the stage for the last time to play an extended solo. She brushes up against the backs of us strangers as her guitar wails- somehow transmitting the loving message: I know life sucks most of the time, but hey, I’m right there with you.

After “That Man”, the crowd demands an encore. Those Darlins oblige with “Red Light Love”- that fun, hooky, song that was featured in a Kia Sorento commercial awhile back. Of course, as is the case with rock and roll bands of this caliber, the song is three times as good live. The Darlins leave behind them a very pleased crowd, to say the least.

In closing,  Those Darlins knocked their show out of the park and I bought their vinyl. It was an awesome night to be a part of.  I’m already itchin’ for another Chronic Town concert.