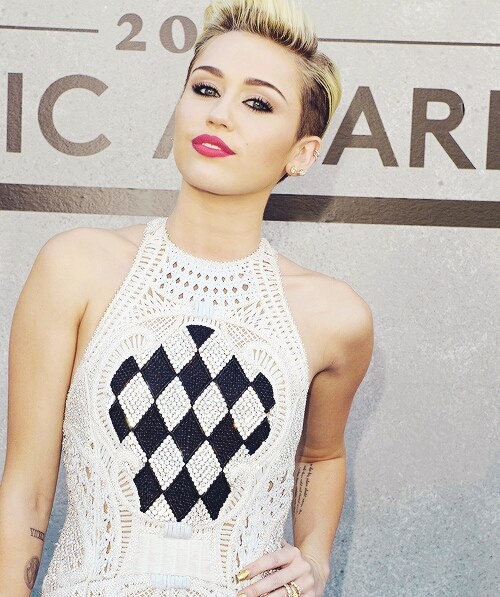 America’s favorite rebel held a countdown for her newest single “We Can’t Stop” through Twitter, brewing her fans a barrel full of anticipation and curiosity until the track dropped June 3rd.

In the past few years, the 20-year-old has made sure “y’all” understand that she’s no longer Disney’s innocent TV star, Hannah Montana. The punkster rocks a blonde pixie cut, has added a few more tattoos to her collection, and most importantly (and what pops up first on google search) has become a twerking sensation when she shared a video of herself twerkin’ it to J. Dash’s song “Wop.”

Her affiliations with hip-hop artists had her fans and spectators even more on edge about the new single, and have been questioning if her fourth studio album will be dominated by rap.

Only time will tell, but one thing for sure is that “We Can’t Stop” is an overly-obvious reflection of Miley’s IDGAF mantra. Producer, Mike Will Made It, says it’s a “point-of-view” record, and explained that some of the song’s questionable lyrics and possible references to drugs are not about Miley, but are put out there for people to interpret however they want. Some parts of the song that left people scratching their heads are:

“trying to get a line in the bathroom” (possible reference to cocaine?)

…But I’ll leave it up to your point-of-view.

Once the fog of excitement for the track’s release cleared and I gave the song a few more plays, I’ve come to the conclusion that I’m not impressed with Cyrus’s new single. “We Can’t Stop” is a mixture of dull and potentially drug inspired lyrics, and has a general lack of pizazz. In my opinion, the deviance this song is supposed to exert seems like a forced effort, and my high expectations, which I blame on the anticipation, were unfulfilled. What I hear is all I get from the track, and it fails to ignite any emotion inside of me. There’s no doubt the song is catchy, and regardless of my disappointment I remain hopeful for the album, but giving this song a 6 out of 10 rating almost seems generous. I get it Miley, you like to party. You can’t be tamed, blah, blah, etc, etc. All I can do is hope that she does a better job of channeling the rebelliousness that I love so much in her future projects.