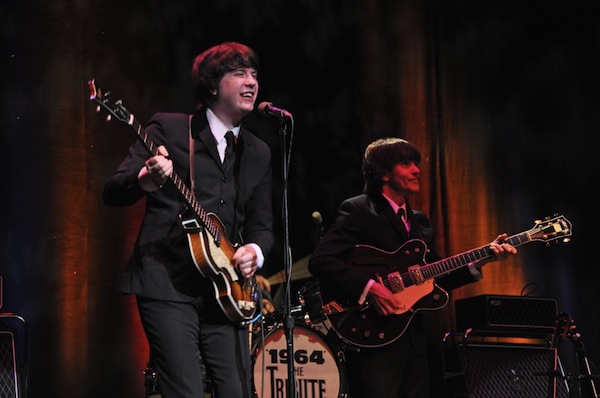 A few weeks ago, I heard that the Beatles were coming to Penn State on Feb. 23—imagine my surprise. A reunion tour would be fairly impossible due to George and John no longer being with us and Paul and Ringo consumed with their own projects.

No, no, it was 1964: The Tribute, a Beatles tribute band that has been called the best Beatles tribute ever by the likes of Rolling Stone magazine and have been touring since 1982.

Mark Benson (John), Graham Alexander (Paul), James Pou (George), and Greg George (Ringo) arrived on stage to an unfortunately small turnout, clad in period clothing and bowl haircuts, just like the Beatles during their U.S. invasion back in 1964.

Performances included that of “Act Naturally,” “8 Days a Week,” “She Loves Me,” and “Can’t Buy Me Love,” but the biggest sing-along came with the long-awaited performance of “Twist and Shout.”

The tribute’s authenticity furthered with comedic banter among the band members. At one point during the show, John asked George to turn around so the audience could see how his heeled shoes made “his bum look better.”

The group has each Beatles’ mannerisms down to a “t”, from Paul’s left-handed bass guitar playing, to Ringo’s lighthearted head bobbing to the beat of every song and George’s endearing bashfulness. And, I would have never guessed that these seemingly bona fide Brits were all American with faux accents.

If I closed my eyes, I would have believed I was listening to John, George, Paul, and RIngo in 1964.

And then, of course, I opened my eyes during “There Are Places I Remember” after John asking the audience to get their phones out to share the number with a loved one. He then followed up that comment with acknowledging, “That’s so lovely, but it’s so, so wrong for a 60’s show.”

Despite the interruption of modern technology, everything worked out so, so well. 1964 has every facial expression, mannerism, movement and voice inflection down to perfection.