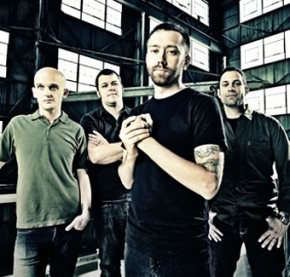 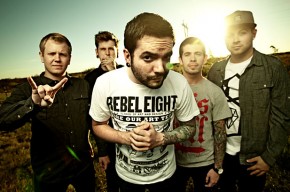 Alternative rockers Rise Against headlined the Bryce Jordan Center yesterday evening in a concert that has been hyped up since November.   Lead singer/guitarist Tim McIlrath stated at one point that Penn State “has been reaching out” to the band for the upcoming show so it was promised to be a night to rock the BJC for sure.

Opening bands for the show were The Menzingers and A Day To Remember.  I did not get a chance to see the Menzingers for I arrived a little bit late for the beginning of the show.  I was on the floor though just when A Day To Remember was setting up their stage rig and ten minutes later, the band came on the stage to fan favorite “The Downfall of Us All.” The pop-punk hardcore quintet went through their catalog picking out the songs like “A Shot In The Dark,” “You Be Tails, I’ll Be Sonic,” and “Have Faith In Me” that got the crowd moving with singing voices included.  Every breakdown that ensued had chugging guitars with smoke pipes located behind the band blowing smoke to the top of BJC’s roof.  Some mosh pits had opened up for some of the heavier songs and I included myself in one of them, nearly losing a shoe at that moment.   Some key events that happened during their set was singer Jeremy McKinnon being put in a human air bubble and rolling over the crowd and guitarist Kevin Skaff sporting a customized Penn State jersey.  To end their set, the band played the anthemic “The Plot to Bomb the Panhandle” and had balloons come down at the last breakdown to celebrate the end of their show.  After this, the wait for Rise Against had begun and the crowd had moved closer to the stage.

After a half hour wait roughly, Rise Against had taken the stage to a backdrop with the known symbol of the band that consists of a fist inside a heard acting as the pupil of an eye.  The band’s overall setlist had covered almost a whole decade of their discography including hits like “Ready To Fall,” “The Good Left Undone,” and “Re-Education (Through Labor).”  The band even threw in few songs that have not been heard by the crowd like “Broken English,” “Paper Wings,” and “Blood to Bleed.” Their backdrop had changed at this point to the cover of their most recent and commercially successful album, “Endgame.” All four band members, McIlrath, bassist Joe Principe, guitarist Zach Blair, and drummer Brandon Barnes, had gone through an hour of just plain playing synchronized rock to a crowd that was heavily participating and having the band members being one with the audience.  McIlrath came out with an acoustic guitar to play “Audience of One” and the ultimate Rise Against song “Swing Life Away” that had almost every smartphone or camera ready to take the memorable performance.  There were two more encores after the mini-acoustic set with more slow rock tracks before ending with their biggest rock hit “Savior” with an extended interlude that had the band showing their true talents and ending the show with a bang.

This show was a memorable one to attend for it was two of my favorite bands I have been following since their respective inceptions in the music industry.  Another reason why was that it was happening here at Penn State and I did not have to travel far to get to the show.  Overall, it was the loudest show I have been to in awhile and it was all thanks to the acoustics of the BJC and to both bands for rocking to their full potential.  I was surprised the score board tron did not fall from the rafters because Rise Against surely rocked the roof out of its audience members.

Here are pictures live tweeted by us, @StateInTheReal during the show! 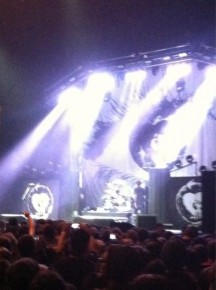 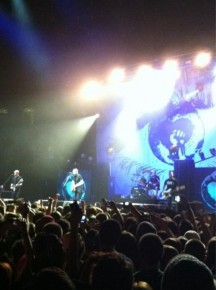 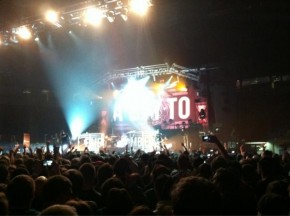 Jeremy from A Day To Remember in a Bubble!