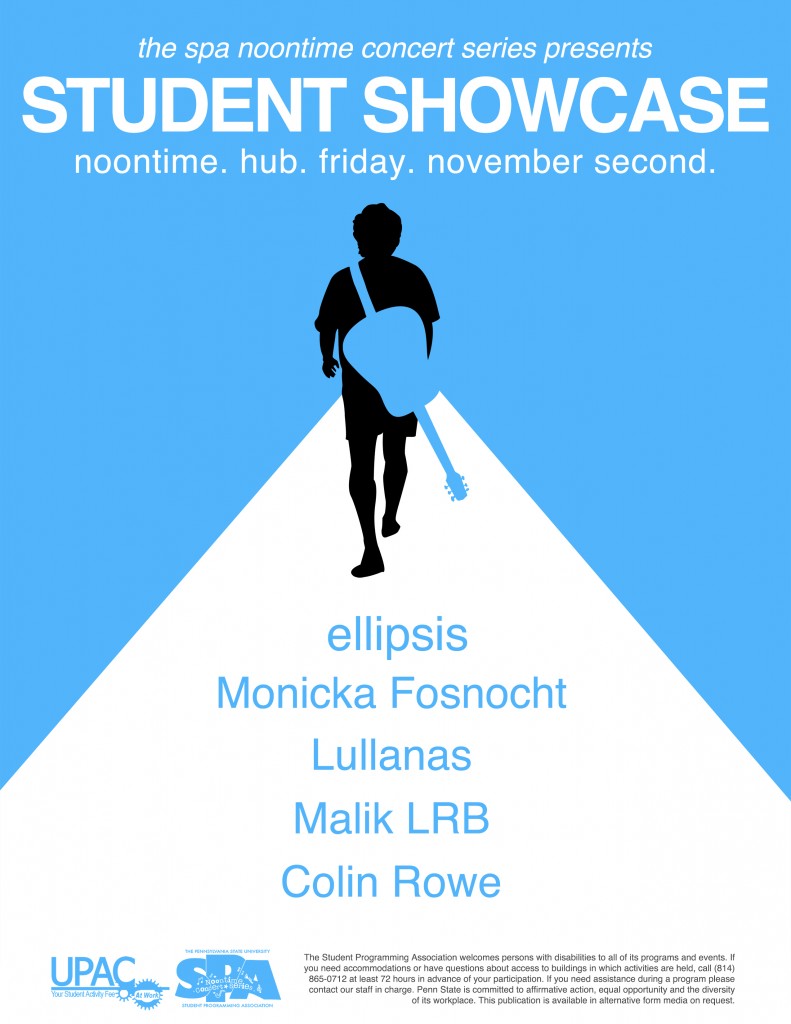 Students got to show off their musical talents this week at SPA’s Noontime Concert. 5 students stepped up to the microphone and put on quite a show for at the HUB. Acts included local DJ ellipsis, singer Colin Rowe and rapper LRB. Each of the acts had the HUB rocking for their sets as students came and went during the 2 hour event.

DJ ellipsis took the stage first and performed some really insane music. He performed two original songs and a cover of Lady Gaga’s hit “Electric Chapel”. The synth and pads had the audience rocking while more and more students filled in the crowd. Ellipsis even showed off his vocal skills singing a few verses from Gaga’s hit song.

Next up was singer / songwriter Colin Rowe. The talented vocalist and guitarist performed covers from Katy Perry and Eric Hutchinson, as well as his own original songs. Rowe even stepped to the piano and covered Jessie J’s track “Domino”. Colin’s original song “Will Survive” might have been the most impressive of his set. His lyrics brought the crowd into his mind as he told a great story.

Not too many acoustic guitarists can truly sing and rap, but Monicka Fosnocht certainly can. The talented singer / songwriter started with an original song to the beat of Eminem and Rihanna’s hit record, “Love The Way You Lie”. She then performed a few original songs about love, including a song about a scary time she almost got arrested. She is definitely a solid performer and had the crowd captivated.

The Lullanas are an extremely talented duo. The two singers stepped up to the microphone and serenaded the crowd with their voices. Accompanied by a guitarist, they performed a few covers and original songs to the pleasure of their fans. The duo even got into some Taylor Swift, which is always a good thing. These two definitely play great off of each other and have a great sound.

LRB closed out the noontime concert performing some classics his fans know and love. The rapper has a project coming out soon, and has been performing at a lot of Penn State events lately. His voice is easily recognized and always enhances his music. He sampled some crowd favorites like “Call Me Maybe” and “Starships”. With solid production on his tracks, LRB was the perfect closer for the noontime concert.

The student showcase was a huge success this Friday. The 5 acts got to perform in front of a large crowd of friends and students. Whether it was rapping or singing, original songs or covers, everyone enjoyed the music these guys performed. Mark it down as another great Noontime Concert from SPA.