DETAILS FOR St. Lucia to Perform at Levels this Thursday! Get Free Tickets to the Show!

St. Lucia to Perform at Levels this Thursday! Get Free Tickets to the Show!

Eric Poluhovich
Events
Comments Off on St. Lucia to Perform at Levels this Thursday! Get Free Tickets to the Show! 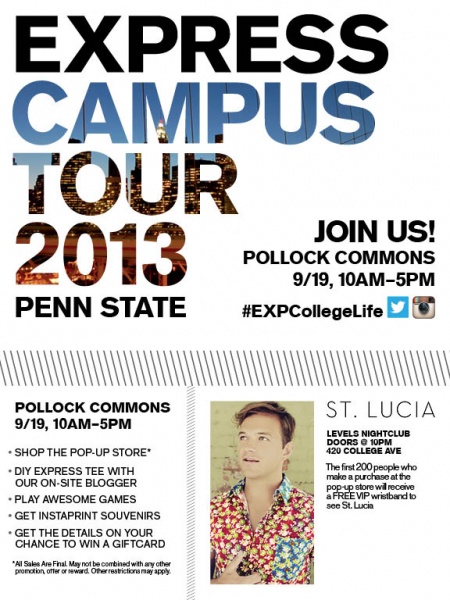 St. Lucia will be performing at Levels, and we have free tickets for you! But first, there’s a few things you need to know:

1. St. Lucia is performing this Thursday night, September 19th, at Levels. The doors open at 10pm.

2. Before the show, EXPRESS will be hosting an event at the Pollock Commons from 10am-5pm. Buy some cool stuff, make your own t-shirt, and if you’re one of the first 200 people to make a purchase at the pop-up store, you get a wristband to the St. Lucia show that night. Make sure you get there early to buy something if you want a wristband.

3. St. Lucia’s new single “Elevate” is out now! St. Lucia hasn’t been around for very long, but with smart, well-crafted pop songs like this one, they’ll be around for some time. The song starts off sounding similar to M83 and Com Truise, and reminiscent of 80’s new wave or synthpop, with their own touch. The vocals stand out here as being extremely clear. Their vocalist was vocally trained in the South African mountains and has been performing for his whole life, so that definitely counts for something. The chorus is huge, and with the accompaniment of a backing vocalist, it blows off into a wave that could suck most listeners in. Halfway through the song, a chorus and a trumpet comes in, and the song gets even catchier. After one listen, the song was stuck in my head for hours. St. Lucia is coming from Neon Gold Records, which helped launch Passion Pit and Ellie Goulding, so you definitely do not want to miss this band. Stream the new single here!

4. Last but not least, you can win free tickets to the show! We have 18 free wristbands to give away! EIGHTEEN! No need to buy anything, just do some simple tasks. We’re giving away 10 wristbands on Twitter! All you have to do is retweet our tweet, or tweet at us, saying, “I want free tickets to @StLuciaNewYork from @StateInTheReal and #EXPCollegeLife!” We’re giving away 5 wrist bands on Facebook! All you have to do is go to our Facebook page and click share on this article post! And we’ll be giving away an additional 3 tickets in a special way, so check our social media accounts for it! Other than that, good luck!