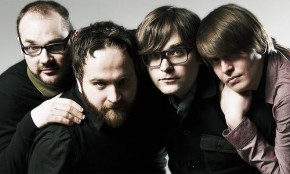 Nate: I’m thankful for Death Cab for Cutie because, with seven studio albums, they have a song for nearly every situation. The lyrics of Ben Gibbard make statements that are so obviously true, even though you’ve never thought of what he’s saying it in that way before. Death Cab’s songs vary musically from simple melodies to intricate chord structures and rhythms.

As an aspiring songwriter myself, Death Cab for Cutie serves as endless inspiration. They are just regular guys, making great music.

Here are some of my favorites:

Topher: I’m thankful for Death Cab for Cutie in ways that I can’t accurately describe with words. And I think part of what I love about them is that their songs often put into words things that I’ve never been able to say.

I’ve been listening to Death Cab for over 8 years now, and I can vividly remember the first time that I listened to their album Transatlantacism straight through. I was in the car on the way home from a camping trip, and it was 2 weeks before starting high school. I don’t remember ever being relate to someone’s lyrics quite in that way before. What was even stranger was that I felt like I could relate to the songs about situations I had never even experienced, but somehow knew that I would at some point in the next few years. My amazement in the tunes actually had me genuinely excited to experience the shitty romantic situations that Gibbard was describing. And sure enough, Death Cab’s ability to describe things that no one else can seem to put into words helped me through the endless trivial crap that comes with being in high school, as well any of my woes with college hoes.

Heres a few of my favorites: