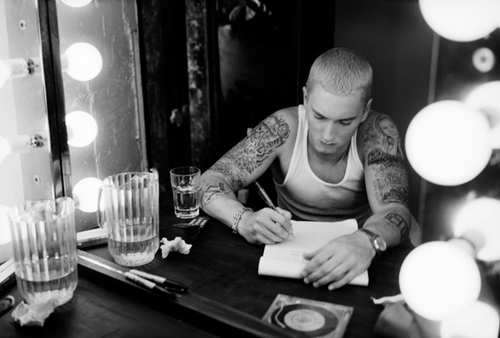 Never has an artist been so lyrically raw that you have to replay his songs over and over again. Whether it’s the hit albums Curtain Call, The Eminem Show, or The Slim Shady LP, all of us have found ourselves enthralled with Eminem at one point or another. An entire discography of excellent music is hard to come across, but the Detroit rapper has achieved that. He is the only artist in the world that can tell a fan to “F” off and still have the fan wanting to come back to meet him. I wanted to highlight some of the tracks that Eminem has done that have been a huge part of my musical life. I want to be clear, I’m not saying these are Eminem’s best songs, they’re just some that I enjoy.

“My Name Is” a song that all of us are familiar with. Eminem has made a living off telling his story and doing it in a creative way. He comes at other artists constantly and is willing to say thing others aren’t. Maybe the best line of this entire song is “I don’t give a F***, God sent me to piss the world off.” That is what this rapper has done, he has taken music that has made so many people angry and turned into a successful career. When he first came out, he had this huge chip on his shoulder. Luckily, Dr. Dre turned that chip into incredible album after incredible album.

“Lose Yourself” is the lead single off the critically acclaimed movie, 8 Mile. The movie was great and an all time favorite, but the soundtrack that accompanied it might have been better. When “Lose Yourself” came out, it was a guaranteed number one hit. Everyone I knew was playing it over and over again, learning the lyrics and reciting them time after time. It’s a song that shouldn’t be skipped and  I doubt it ever has. Along with the hit single “8 Mile” this is one of my favorite tracks off of the soundtrack.

Eminem has become famous for making fun of those fans that “relate” to his music. The fans that think they know what he has been through, and what it took for him to get to where he is. “Sing For The Moment” is a track that I’m sure that everyone can “relate” to. It is one of the best story-telling tracks of all time. On the hook is Steven Tyler of Aerosmith and he accompanies Eminem perfectly. Eminem shows a side that we all love to see from him, that side that you feel like you’re in the mind of the rapper. Definitely a track worthy of running back time and time again.

“Like Toy Soldiers” tells an incredible story. With lines like “I’m supposed to be the soldier who never blows his composure, even though I hold the weight of the whole world on my shoulders.” We get a trip into the mind of Eminem with this one, as he talks about his beef with Murder Inc. and specifically Ja Rule. He talks about his friends getting killed over hip-hop beef, something that should never happen. Eminem talks about getting advice from mentor and Dr. Dre and friend 50 Cent to stay away from the beef that ultimately kills his best friend. The track is insane. Most lyrical songs don’t compare to this one.

“The Way I Am”  is another song that we all can “relate” to. When this one first came out Eminem was in the middle of the normal controversy that surrounded his early career. He took a second to tell his critics to back off, and to say that he isn’t going to change who he is. Listen to the lyrics like “I’m not Mr. N’Sync, I’m not what your friends think.” Eminem attacks those that doubt him in this song, and it’s incredible.

Although some Eminem fans were disappointed with Recovery, I thought it was pretty sweet. The lead single “Not Afraid” was the biggest track on the album and for good reason. The former addict has gotten clean, and he’s sharing that fact with his listeners. He literally is “Not Afraid” of anything anymore, he has beaten his addiction and ready to take on the world again. He continues to be a leader in the hip hop game for songs like this.

Eminem is one of the highest selling artists of all time. I really don’t think he cares. When it’s all said and done and the Detroit rapper stops making music, I doubt the money will be what matters. Instead, I think what matters most to him is the amount of people he affected with his music. Music is meant to inspire and provoke though, Eminem does that with all of his songs.