State In The Real Interviews Crobot at Levels

Eric Poluhovich
Outsource Interview, Uncategorized
Comments Off on State In The Real Interviews Crobot at Levels 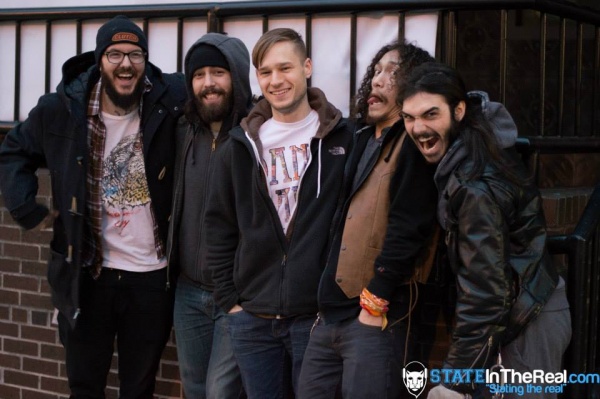 Space-rockers Crobot recently embarked on tour with Clutch and The Sword. Before their show at Levels on Wednesday, January 15th, State In The Real got the chance to talk with the guys from Crobot, about everything from space rock and a new album to facial hair and hot sauce.

Eric: What’s up guys, this is Eric from State In The Real and I’m here with Crobot. Can you please introduce yourselves?
Jake Figueroa: Hi I’m Jake. I play bass.
Brandon Yeagley: I’m Brandon and I sing and play the harmonica.
Paul Figueroa: I’m Paul and I play the drums.
Bishop: And I’m Bishop and I play guitar.

Eric: Can you give us a brief history of how the band started and how it came to this line up?
Bishop: A brief history? *laughs* Well Jake and Paul had played together in different bands. Jake and Paul were in a band called Thick Leather Brick, which was really awesome. They were very similar to Crobot and we played a lot of shows together and we always wanted to be in a band with them, and we finally got the opportunity and it worked out really well.
Paul: That was actually a really good summation- spot on.
Bishop: Yeah that was really quick right?
*band laughs*
Brandon: It was a really good nutshell.

Eric: So you guys have a “space rock” kind of sound. Is that a self-described thing?
Paul: Probably yes and no.
Bishop: It sort of came into that with the effects I was using and the spacey-ness and the throwback old-school vocals. That s***’s cool to us, y’know? We love the space stuff.
Brandon: We’re geeks at heart, for sure.

Eric: And it just came to that naturally?
Bishop: Yeah it was never a forced thing. We basically just wanted to be like Black Sabbath, and Clutch. And here we are.

Eric: And it says that you’re influenced by sci-fi novels and movies. Is there some specifics that you’ve used while writing? Were there specific movies or books you read, and then you like “Okay I’m going to do this then write a song” ?
Brandon: Actually, there was one specifically. The song “Wizards.” I’m trying to remember the quote verbatim, but it was a 1976 cartoon based on two wizards fighting each other, and one was a wizard of technology and the other was a wizard of old magic. It was just based on the sentence description from Wikipedia that the song was written.
Bishop: Post-apocalyptic, science-fiction fantasy something.
Brandon: It was a pretty crazy quote but that’s just one instance where something of the sort was taken and ideas were made from for sure.

Eric: And you have plans to possibly make a graphic novel based on your album The Legend of the Spaceborne Killer? Is that something you still want to do?
Bishop: Eventually yeah. Right now, I do all the art for the band and we’re all working on concepts and ideas for album art and stuff. That’s where we’re at. We started with sketches and stuff like that but I think that’s something that will just come to be from pieces and sketches that I’ve done that we’re never used. I’m sure Brandon would just come and write to it. I think it could be something really cool eventually.
Paul: We’ve got a lot of ideas that surround stuff like that. We want to make video games and movies and stuff. We want to do it all.
Bishop: Action figures!
Paul: Very ambitious.

Eric: I was going to say that. Ambitious ideas. Very ambitious.
Paul: We’ve got hot sauce, and air fresheners.
Bishop: We’ll see what happens though.

Eric: I was going to ask what’s next. Like music videos or another album? Or just going to go straight to video games and action figures and hot sauce?
Paul: Yeah we’re going to stop making music actually after this tour.
Bishop: We just recorded actually. We just recorded with a guy called The Machine. He’s a producer who’s worked with Lamb of God, Clutch, Every Time I Die, a lot of really big bands. Some of our favorites. That should be coming out in 2014. We’re not really sure when.
Paul: March or April.
Bishop: Yeah March or April. We’re also going to be shooting a video in hopefully March or April for that. The single is yet to be determined.

Eric: I’ve heard mixed things about Machine. What do you guys have to say about him?
Band *collectively): Really? Oooh. Can we infer as to what things you’ve heard?

Eric: I’ve heard that he’s kind of blunt and unconventional.
Bishop: He doesn’t have a sensor. For sure.
Paul: Yeah if he doesn’t like something, he lets you know. He’s very passionate about letting you know that he doesn’t like something. But in the same breadth if he does like something he’s just as passionate and enthusiastic.
Brandon: Which makes it totally worth it. To see someone get so excited about something you’ve done is really f***ing cool.
Paul: The dude will like jump on couches…
Brandon: Screaming. Literally screaming.
Paul: ….and be like in the room, always with the headphones on, always in the room with you. He’s like the 5th member for the whole two months we were there. He’s really got some great ideas.

Eric: Very cool. Is this your first national tour? Have you done smaller tours?
Bishop: We’ve done a few smaller ones and a few people attended some of the shows.
*band laughs*
Brandon: This is the first big like, sell out.
Bishop: Because Clutch and The Sword are like two of our favorite bands, as well as like everybody else in the world. So it’s awesome to be the first band on because people are there early. If they’re not there to see us, they’re damn sure not going to miss The Sword, so we get to reap the benefits of that, y’know?
*car drives by blasting Nickelback*
Brandon: As Nickelback plays in somebody’s radio.
*Everyone laughs*
Paul: That was like a Camaro too…

Eric: I was going to ask specifically about tour with [Clutch and The Sword]. What is that like? Are you guys trying to learn as much as you can?
Bishop: Absolutely. My biggest way to describe it is, when we’re home for a day off, you know that feeling you get when you’re star struck from someone? That just doesn’t go away. You think you’re just going to be buddies and stuff, but these guys come up to you and you’ve looked at them your whole life and sometimes words don’t come out. You know you feel like an idiot.
*band laughs*
Bishop: But it’s cool because they’re cool and they’re really nice people and they all respect us and everyone here just loves music.

Eric: Very cool. So do you guys have any tips on facial hair care? Anything specific?
Bishop: Don’t shave.
Jake: Don’t shave. My beard doesn’t really look good.
Paul: This is a year of not growing. That’s it.
Bishop: It’s just lack of responsibility and care for oneself. That’s really all it is. It’s cool though.

Eric: Useful advice. Is there anything else you guys want to say?
Bishop: Herwig’s [Austrian Bistro] down the street is a great place. They have cinnamon bacon cinnamon rolls. Those are awesome. And they’re really nice there.
Paul: The wiener schnitzel was amazing.
Brandon: I’m going to leave it at that.
*band laughs*