State In The Real Interviews Jean from St. Lucia

Eric Poluhovich
Outsource Interview
Comments Off on State In The Real Interviews Jean from St. Lucia 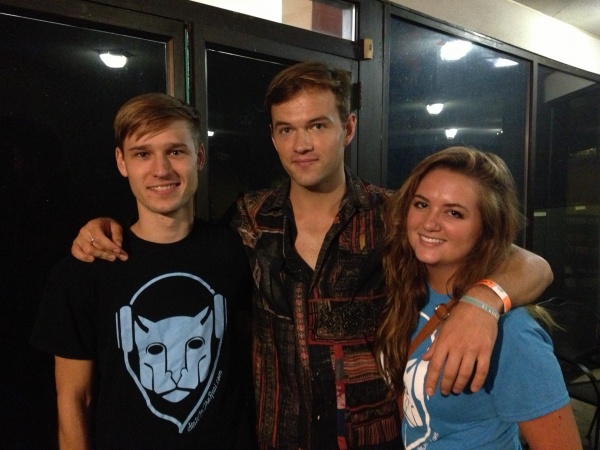 We did an interview with Jean-Philip Grobler, lead singer of the synthpop outfit St. Lucia. He was very friendly, and was happy to talk to us. If you missed our radio show yesterday, State In The Real Music Mondays, don’t worry! You can read/listen to the interview below!

Eric: This is Eric from State In The Real and we’re here with Jean from St. Lucia. What’s up?
Jean: Hey man.

Eric: Good. *laughs* So I’m just going to ask you a few questions. You had a bit of an unconventional start to music. Do you want to talk about that, how you came to singing, and how you came to where you are?
Jean: Sure. Well I was born in and grew up in South Africa. I was born in Johannesburg, but when I was about 10 years old, I went to this boy’s choir school called the Drakenberg Boys Choir School and it was a very intense musical education, as well as just being in normal school. It was in this very rural area of South Africa in the mountains and we’d do 2 hours of choir practice every day. It was very classical, but not only classical. We would also do African music, and there was a local rural African school and we would go there sometimes to learn songs from them and we would tour the world with this choir and we beat the Vienna Boys Choir in a choir competition once. So it was a legit thing, so I guess that’s the unconventional part. When I was 19, I moved to England and I went to music school in Liverpool in England. After that I moved to the States and here I am. I’ve been here for a few years.

Eric: So what’s it like being signed to a label that’s had artists associated with it like Passion Pit, Gotye, and Ellie Goulding? How does that feel for you?
Jean: I mean it’s great. Lizzie and Derek from Neon Gold are two of the loveliest people. Obviously when they approached us we were excited because of the artists they’ve worked with, and obviously they’ve helped a lot of artists. I mean in someway I guess we’re similar to Passion Pit and Ellie Goulding because it’s synthpop. I’d like to think we’re a bit different but some people put us under the same heading. But it was mainly because they’re really really nice people and they’re super passionate about music. They’re not doing, at least I think they’re not doing it, to get rich. I don’t know if anyone is getting rich from the music industry these days apart from Psy. But I think they’re in it for all the right reasons and I think we are too, so that’s the main reason we wanted to get involved with them. But it’s obviously exciting that they’re involved with all of these bands as well.

Eric: I believe you did a tour opening for Passion Pit and you have a tour coming up opening for Two Door Cinema Club. You guys are a newer band, so what’s it like for you, going on tour with these bands that are more established, have been around, and are making a name for themselves?
Jean: Well we never actually toured with Passion Pit but we did play a show with them. But yeah touring with bands that are more experienced is always really educational, because I think the more time you spend on the road and the more time you spend doing this, you learn things. You learn, “this is obviously not working, we have to change it.” Sometimes when you tour with bands that have more experience it’s like you get a head start. Instead of learnign from your mistakes you can learn from seeing the way that other people do it, who’ve been doing it for a while, and you can just learn from what they’re doing and how they’re sort of living life on the road, because it’s not always easy.

Eric: What’s the hardest part about being on the road?
Jean: You know, just being uprooted from your every day life or normal life, if you can call it that. Being forced to eat really s****y food a lot. Just your whole routine is thrown up in the air, you can’t exercise. It’s just being thrown into this really tumultuous washing machine for a month at a time. That’s the hardest part. But it’s also loads of fun and amazing at the same time.

Eric: This past summer you played at Firely. What was it like being able to play at Firefly, since like I said before, you guys are a newer band breaking into the scene, and you’re already playing such a huge event. What’s the like for you?
Jean: Firefly was amazing. The weather was perfect. We played a bunch of other festivals this year where the weather was terrible. We played Governor’s Ball and we played Boston Calling. Both of those festivals it was torrential downpours. Everybody at the festival was soaking wet and it was cold. And then we got to Firefly, and the weather was amazing. The crowd was amazing, it was an incredible experience. It was great.

Eric: You released a new music video today. Do you want to talk a little bit about that?
Jean: Sure. So we released a music video for our new single “Elevate”. Basically the story behind the music video was that, basically, we have a studio in Williamsburg, Brooklyn, which is where we live. We don’t live in the studio, we live about 3 minutes from the studio. But we found out about a few weeks ago that we’re being evicted from the building because they’re turning them into condo. Y’know, luxury apartments. And, we’ve been delaying it and it and delaying it, pushing it back, writing to the landlord. But now we have to be out in November, so we decided because this is kind of the end of an era, and there’s so many people in this building who make amazing music, as well, that we would just make a music video that’s a celebration of that area and basically have a rooftop party on the top of the studio building. So that’s what we did. My best friend directed it and it was a very family vibed video that was just done with a lot of love.

Eric: You have a unique sound and it sounds like you draw influence from a lot of places. Do you want to talk a little about what some of your influences are?
Jean: Sure. I mean I’m influenced by a lot of different things at a lot of different times. Obviously the music of St. Lucia is very influenced by the 80’s. I grew up in the 80’s. I think that the music that enters your consciousness when you’re really small is the music that effects you the deepest, or that you come back to at some point. But I think one of the things that I’m most influenced by or inspired by is artists that try and break out of the boundaries of their perceived genre or what people expect of them. I think a current example of this is Kanye West. He’s really driving hip-hop forward. Some people hate him, but I think that’s often the sign of a brilliant artist, is when some people love them, some people hate them, but no one can really ignore that person. In the 80’s, Kate Bush was doing that, Peter Gabriel was doing that. That’s something that really inspires me because I inspire to that myself. I don’t always want to be thought of as an electro-pop artist. I’m going to try and extend those boundaries and hopefully push the genre forward in some way.

Renae: What do you think of Miley Cyrus?
Jean: I mean, I think she’s winning obviously. *Renae laughs* No she really is. Everyone has so much bad to say about her, but isn’t she #1 at the moment? (Renae responds, “#1 human!”) Just in every way. It’s just a product of our time. Who’s to say that she can’t do what she’s doing? I think the thing that was surprising for everyone was the fact that she was this big Christian girl who was Hannah Montana and then she swung around, like “I’m a woman now I’m gonna get naked!” So that’s the surprising thing, but I don’t think that there’s anything wrong with what she’s doing. It’s funny.

Eric: So you’re doing this tour with EXPRESS. Did they approach originally or were you talking with them? How did that come together?
Jean:I think they approached us actually. We just heard from my manager. It’s not actually a tour. It’s just a one-off show. I think they have a great online shopping experience and some great clothes so we were like, “Sure, we’ll do it,” and it’s always good to come to colleges because it’s a different experience to play for kids in college than to play for a normal audience. I think kids in college are more receptive to new music than people who are slightly older and are out of college.

Eric: So what’s next for the band?
Jean: Well we have this big tour coming up, like you said, with Two Door Cinema Club. Our debut album is coming out on the 8th of October, which is in a few weeks. And yeah, hopefully just going to be touring and releasing more singles and making more videos and I’ll be doing some more remixes and hopefully working with more other bands. I don’t know, just keeping making more music.

Eric: Is there anything else you’d like to say?
Jean: I think that was a very well researched and questioned interview, so I’ll just leave it at that.

Eric and Renae: Thank you so much.
Jean: Thanks a lot guys.

Check the band out on Facebook here and on Twitter here. Listen to their new single “Elevate” here!!