State In The Real Interviews Wallpaper. At Warped Tour 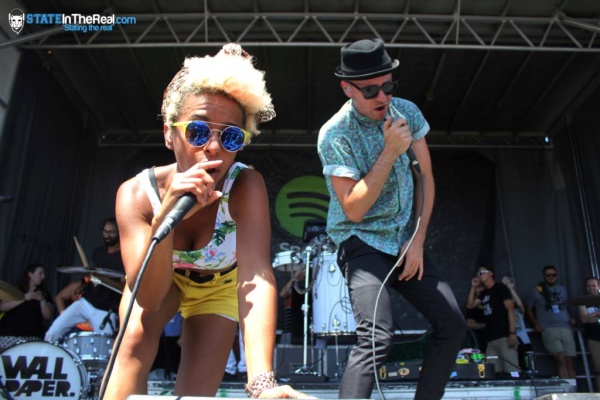 During my August 3rd Warped Tour in San Antonio, I was fortunate enough to have my first interview of the day with Ricky Reed and Novena Carmel of Wallpaper. A hip hop, electronic, pop group with music that you can’t help but find yourself dance/bounce along to, their newest album Ricky Reed is Real was released July 23. Wallpaper.’s first time playing Warped, they filled me on what life was like on the tour, what they brought to the festival, and what they planned to do after (hint: it involves a lot of sleep).

How’s the tour so far out here? Cause I know it’s hot.
R: It’s definitely hot. It’s nice to be back in the sort of southwest though, I mean, the northeast and the southeast was not only humid but we were dealing with crazy rain and borderline tornadoes and stuff. I don’t mind a little dry heat in Texas.
The tour’s been fantastic. The shows have been all so good, and we’ve made so many lifelong friends.

Awesome! You guys play on the Spotify stage, right?
Mhmm.

What do you feel you guys kind of bring to Warped Tour? Like your own kind of style that you add to it?
R: It’s tough because all these bands and DJs and everything are brining great, great things and I think that we bring a lot of fun to it; kind of some light-heartedness. If you dig into our albums you find the heavier, deeper stuff, but when we’re out here at Warped, we’re trying to basically provide everyone with a really meaningful, but light, good time.

So what do you do to beat the heat?
R: That’s a good question, I mean we are in a bus; it’s our first bus tour. The bus is usually pretty cool, so that goes a long way. When we’re on stage, there’s no beating it, you’re just in the elements. We’re lucky that we’ve conditioned ourselves.
N: Yeah, drink a lot of water so you don’t get too dried out. I have a thing where I like to put ice cubes on my ears after we do a set; that helps cool me down. And just seek out air conditioning where you can, like in here [the AT&T center]
R: Yes, do maximum press.

What’s your favorite song to play while you’re out on tour?
R: Favorite song to play on Warped Tour is probably this song of ours called “Hesher” (you can listen to below) because it’s become sort of almost an unofficial Warped anthem with all the bands on our stage; it’s like the sort of song all the DJs and stuff, when we play, they gravitate towards us. It’s been a fun one.
(Note: If you like what you hear, and you will, check them out of Spotify, Facebook, and Chris’s post!)

I know you said the tour is kind of your first experience, how different is it to have to actually come out and tour around for a while as opposed to not touring?
R: Well we’ve done a couple U.S. tours that are not like Warped, but Warped is a totally different experience; the sense of community is different. When you’re just on a regular tour, you’re just with your band and your crew and that’s that, but out here, there’s so many other people to see, so many other high-fives and smiles and hugs when you’re walking into catering or to the showers or whatever it is. A Lot of love.

Fan reactions; does the crowd seem to grow in size with each date?
R: It seems to, but there are also these funny factors no one seems to think about, like sometimes our stage will be in the back corner of the festival and there’s no walkthrough traffic so it’s harder to get across. Or like yesterday, I noticed our stage early on in the day was like basically covered by the shade of all these trees, so there was a ton of kids there all day, and then when we played later, the sun had shifted so the area right in front of the stage was just blistering sunlight. When there was shade at our stage, there were huge crowds, and when there was not shade, there were small crowds.
Also some cities are more pre-disposed to electronic music and whatnot. When we played South Florida, West Palm Beach, the crowds for the DJs, the EDM crowds, were insane; thousands and thousands of people, I’d never seen anything like it.

So do you find that it’s easier to play in the areas where it’s a bigger thing?
R: I mean it’s nice, but also we pride ourselves on being the kind of band that can get out and get people into the show, regardless of what we do. Our music isn’t, I wouldn’t really even refer to us as EDM anyways, we don’t really do dance or house or trap, we just kind of do weirdo pop music that you CAN dance to.

Do you feel like in the future of Warped Tour, it will continue to branch out musically like it has?
R: I definitely think so. It seems like Kevin Lyman really has his finger on the pulse, and knows how to keep this festival changing with the times in really cool ways. I think that the way that he’s curated the bands is the reason it’s still doing so well.

Lastly, what are your plans for after Warped?
R: Probably take a loooong shower, probably shower for an hour, sleep for 72 hours, and then get back in the studio.