State In The Real Interviews William Beckett At Warped Tour 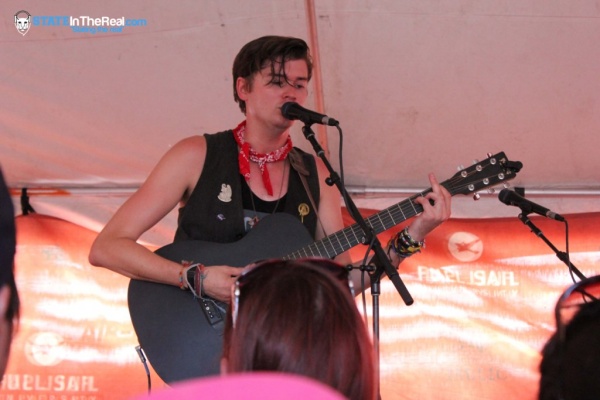 If you are/were a fan of The Academy Is…, then you know who William Beckett is. If you’ve ever listened to The Academy Is…, then you have had the delight of listening to William Beckett sing to you. After the band split in 2011, Beckett began gracing us with his own personal sound by releasing his own EPs, starting in 2012. Culminating into a loyal fan following, his first Warped Tour as a solo artist, and his debut solo full-length album, Genuine and Counterfeit, set to release August 20th.

How’s the tour going so far?
W: It’s been amazing. It’s been exhausting, but I have done this tour before in the past with my band and this being my first time doing it as a solo artist, it’s interesting to see how much has stayed the same and how much has gradually changed. But I’ve had an amazing time with my fans and with my old friends and new friends on the tour. It’s sad that it’s over, but I think I’m ready to sleep in my own bed and see my family.

How different is it traveling as a solo artist as opposed to with a band on Warped Tour?
W: The way I do it is I usually ride with other artists, on their bus. Like I’ll have a bunk on their bus or something because I’m friends with most of the bands I tour with. That’s been really fun, to know new people and to connect even further with friends that I haven’t been super close with. So I guess that’s the biggest difference; is making new friends as opposed to just being comfortable with the old ones.

What do you do on your down time on Warped?
W: Well, I don’t really have a lot of down time; if I’m not at press, I’m usually singing with another band. I do cameos with a number of bands. I do a cameo with Never Shout Never, which I’m doing later. I do one with a number of the artists on my stage—Vinnie Caruana and Billy the Kid, I have her come up; New Beat Fund, I sing with them as well; and Reliant K—so it’s a busy day.

How have you been managing to beat the heat?
W: It’s hot. I mean it’s been fine; thankfully we have a bus that has air conditioning. When we were in Vegas, like a month ago, it was like 120 degrees; it was the hottest day in Vegas I think in the past decade, and over a hundred people had to be evacuated to the hospital, they were dehydrated and heat exhaustion. So that was a tough one to get through. But overall, I’ve done it before and it takes a lot out of you and you have to drink a lot of water.

You have an album coming out later this month. What was the process/experience with making this and all the other songs you released as a solo artist?
W: It’s been awesome. I think part of the reason I wanted to step away from the band was because I think that we had trouble deciding what direction we wanted to go in, who we were naturally; I couldn’t find that with them. I’ve really been able to find that as a solo artist. As soon as I went on my first writing sessions and trips on my own, it’s completely turned around; I’m writing the best I’ve ever written. It’s the most honest and true, and I’m quite happy with it.

What’s your favorite song to perform on tour?
W: It’s really tough to say, I mean a lot of artists don’t like to play their old stuff. For me, I think where you’ve been and what you’ve done makes you who you are now. I don’t have any disdain or like awkwardness about playing old music, but, that being said, as an artist, as someone who creates music from nothing, of course we want to play our new stuff because it’s the most fresh. It’s like Martin Scorsese wants you to go see his latest movie; I’m sure he’s thrilled if you watch Goodfellas, but the reality is that he wants you to go see his new movie. It’s just how it is.

And lastly, what are your plans for after Warped Tour?
W: After Warped Tour I’m going to be home for like three weeks, which will be really nice, and then the album comes out in August, on August 20th, so I’ll be doing a lot of press and stuff like that. Then in early September I go to Australia with Anberlin and The Maine, and then after that…I just got an e-mail about what’s after that!

Check out the video for Beckett’s single, Benny & Joon off his new album!