State In The Real Takes Over Vans Warped Tour 2012

Sam
Mainstream Music, Music
Comments Off on State In The Real Takes Over Vans Warped Tour 2012

Warped Tour has been my most beloved music festival for so long. I’ve been attending Warped every year since I went to the 2006 show in Camden, NJ. Warped Tour has always held a special place in my heart. It’s where I found myself in my taste in music and continue to find new bands to listen to each year. As an active member in the Philly/Bucks County music scene, attending Warped was like a reunion of all my friends from the surrounding area. This year, I wasn’t letting this great line up slip me by, and I made every effort to get the full scope of warped tour as a fan, as press, and even volunteering. All in all, my friends and I ended up attending four dates along the tour, and one was Hartford, CT. As a Warped Tour expert six years after my first show, I took full advantage of my press/photo pass with SITR at the Hartford stop and loved every second of it. Read on for my review of the day and some snap shots of the fun!

6:47am: My alarm goes off with the label “GET UP IT’S TIME FOR WARPED TOUR”. I press snooze for another ten minutes and as I got up at this god forsaken hour, I ponder to myself why I thought Connecticut wasn’t that far from Philly.

7:30am: Me and my best friend Carly hit the open road. Because of the press passes, we had to make it to the venue at doors so we hustled our way through crazy NYC morning traffic, and sat in a very long line for parking but finally made it! 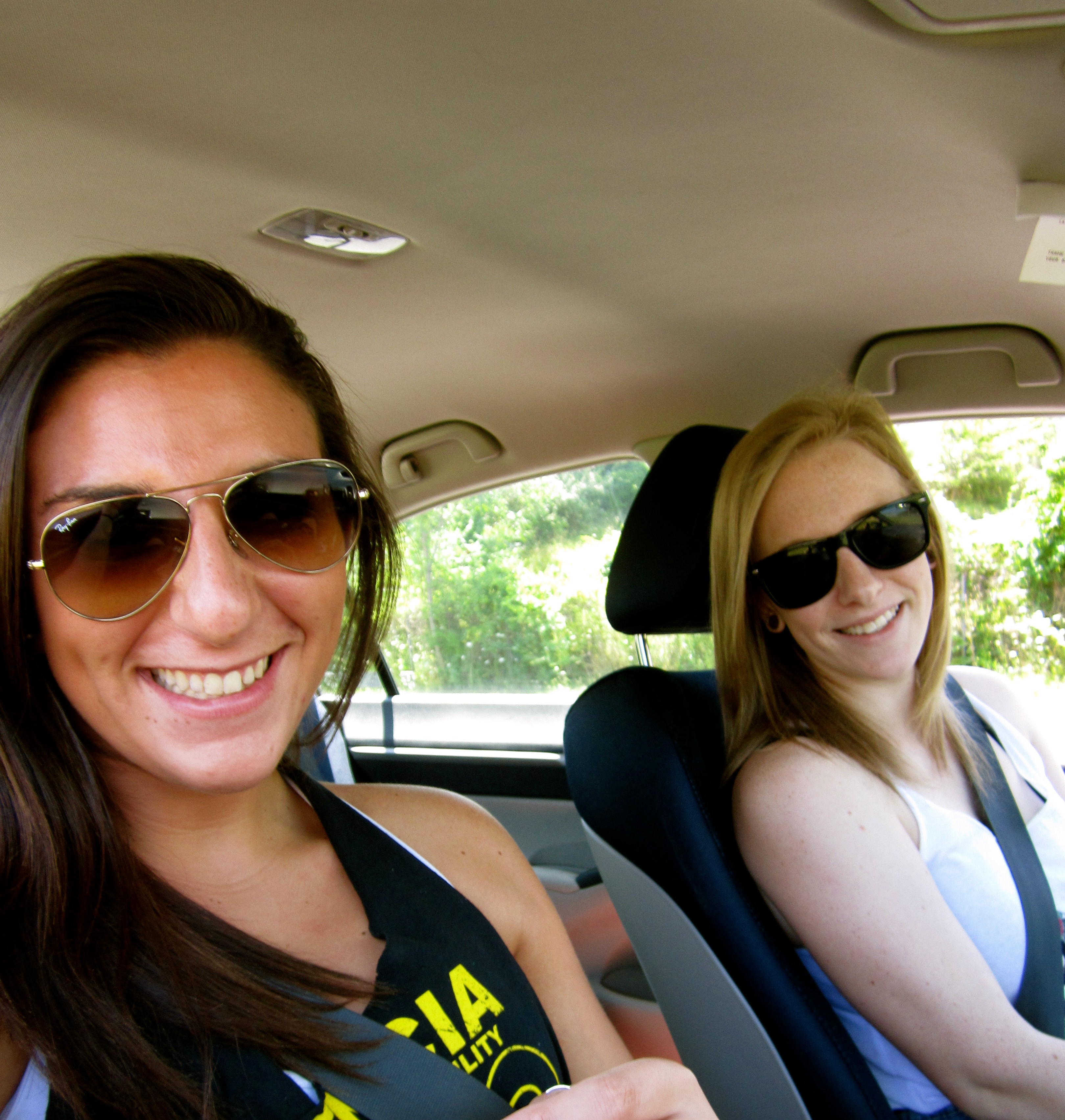 11:30am: The doors of The Vans Warped Tour had opened! Not too sure of the schedule of events, we went straight to the Amphitheater and watched as artist T. Mills took the stage. While I find it interesting when warped has it’s occasional rappers on the tour, T. Mills is…different. He really shows off his personality during his set, and I guess you could say a lot of air humping is involved. 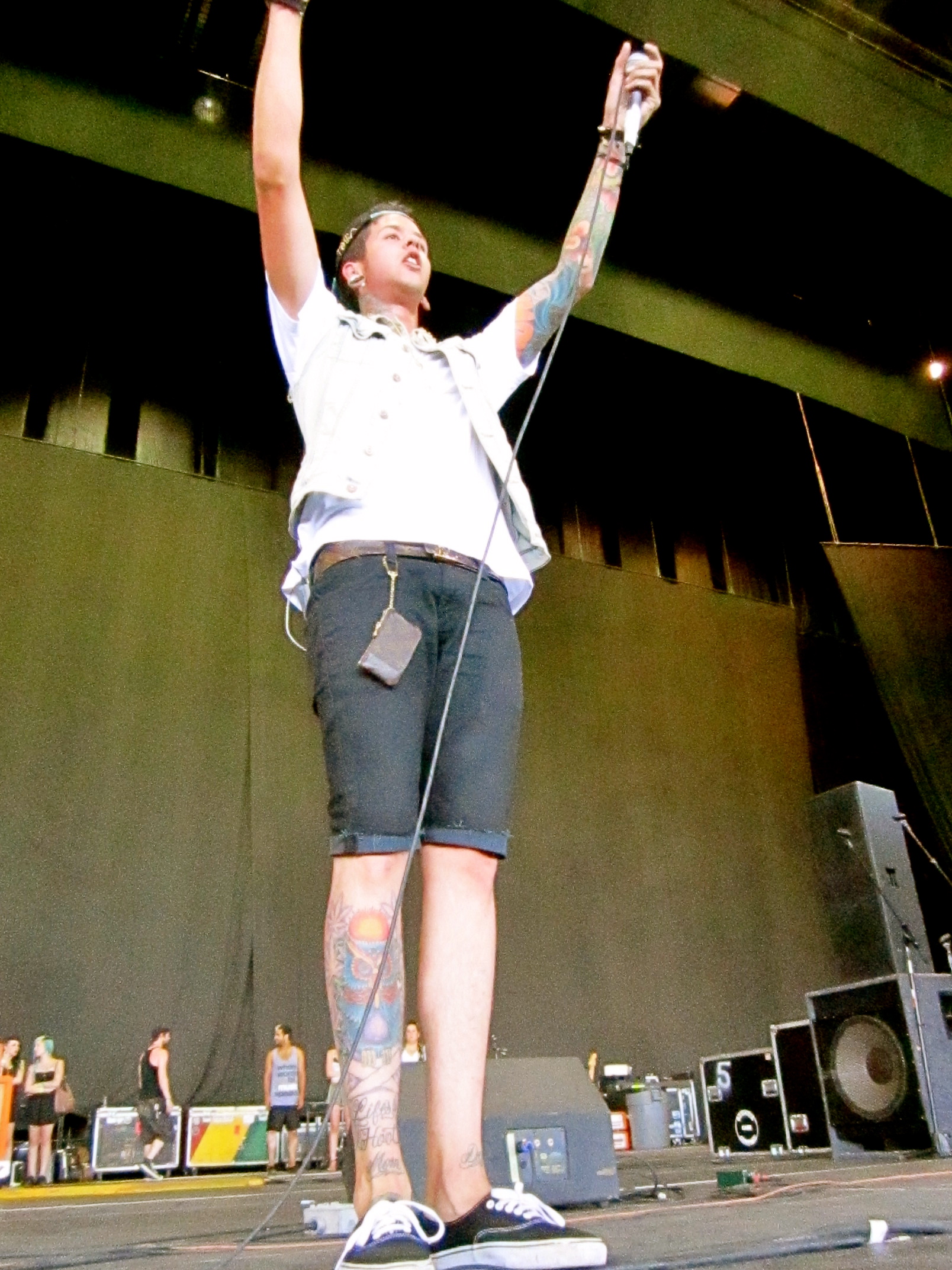 12:49pm: Carly and I find ourselves at the Monster Energy Stage for British Rock band, You Me At Six. It was You Me At Six’s last day on the tour and you could tell how much these guys appreciated their time spent in the states. Connecticut gave them a great send off, and their crowd was full of Europeans, which I found both interesting and impressive that someone would literally come from another country to this music festival. I was actually wearing a Valencia shirt (my favorite band) and as I was getting ready to take pictures in the pit, two girls from Spain starting screaming because while my shirt was a band shirt, Valencia is also a town in Spain where they were from. It was a cool experience to see the lengths that people will go for the music they love. 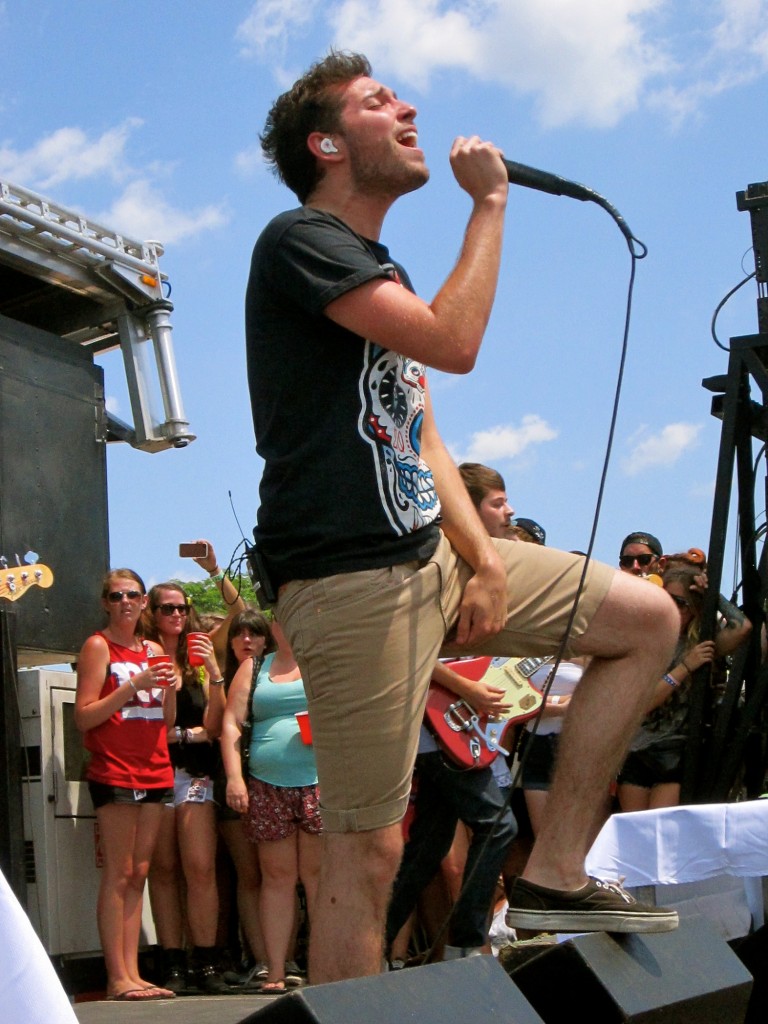 1:24pm: In the heat of Warped Tour, it’s important to stay hydrated and eat! I can’t stress this enough, so Carly and I hit the concession stands for a break from the heat and sat in the amphitheater to catch the bands inside.

2:17pm: The best part about Warped tour is that there isn’t a single genre of music that isn’t included on this tour. As we sat in the amphitheater we caught a Celtic Rock band, a genre I had never listened to (especially being Italian). It was cool to see an actual full sized bass and violin being used on the stage. I really respect the bands that aren’t like your typical bands you’d think to find on Warped. They are also the ones who generally have the most fun with their set just because they have no expectations to live up to.

2:35pm: We Are The In Crowd hit the amphitheater stage and Carly and I were more than ecstatic. We love WATIC and watching them play their set on the tour never got old. As a group, they work so well together and really are an impressive band. As a band with a girl as a lead singer (Taylor Jardine), you don’t find that many guys out in the crowd. Except this show, there were almost as many guys if not more than there were girls. And all were trying to grab Taylor’s attention. Some even brought signs. It really was a funny sight to see! 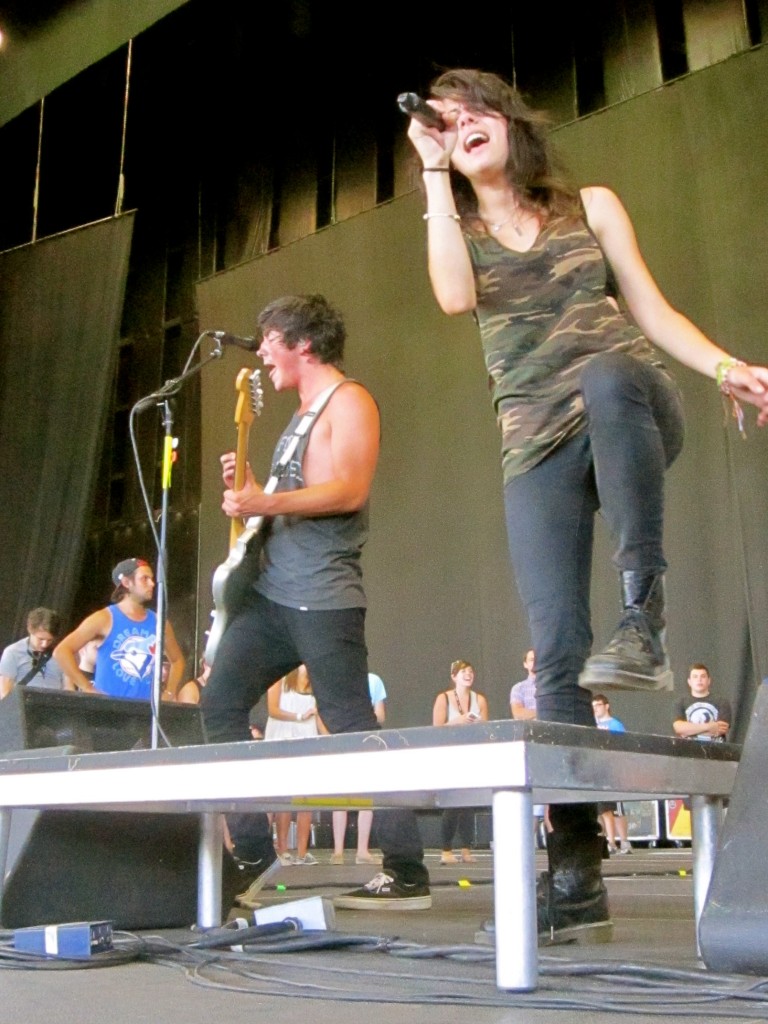 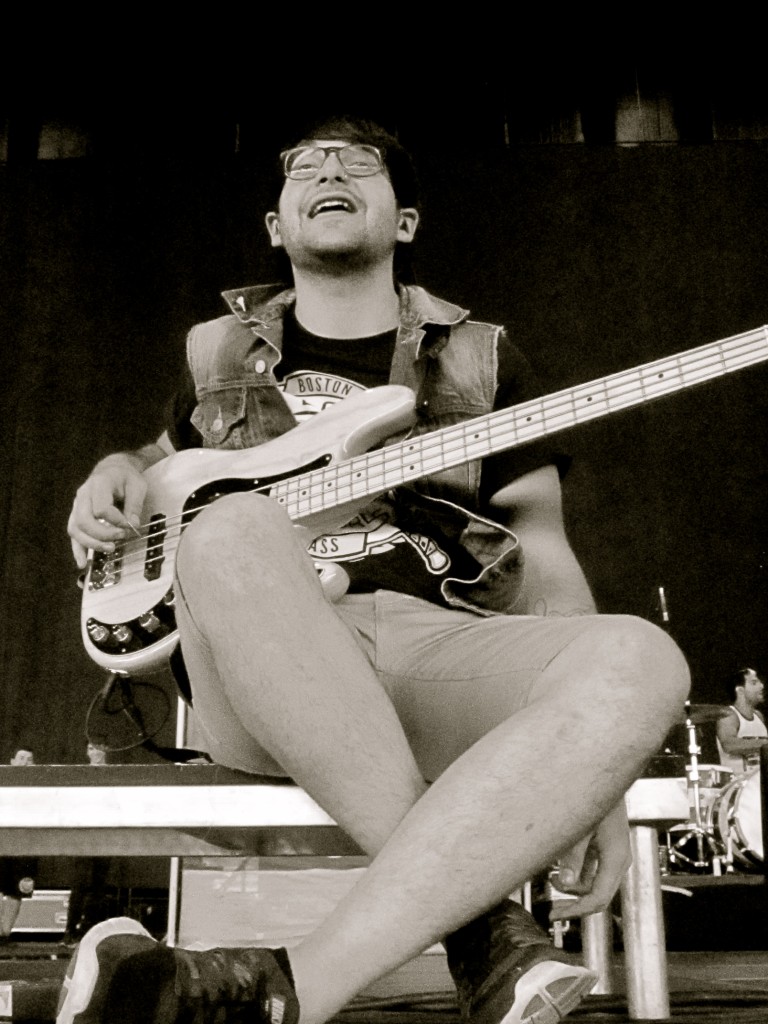 3:30pm: What’s Warped Tour without a meet and greet?! Carly is an avid All Time Low super fan, or as she likes to call her and her other super fans: Hustlers. So I found myself waiting in a huge line to meet the guys of All Time Low. I find warped to be so special because all the bands on the tour genuinely are there for their fans and want to meet them. 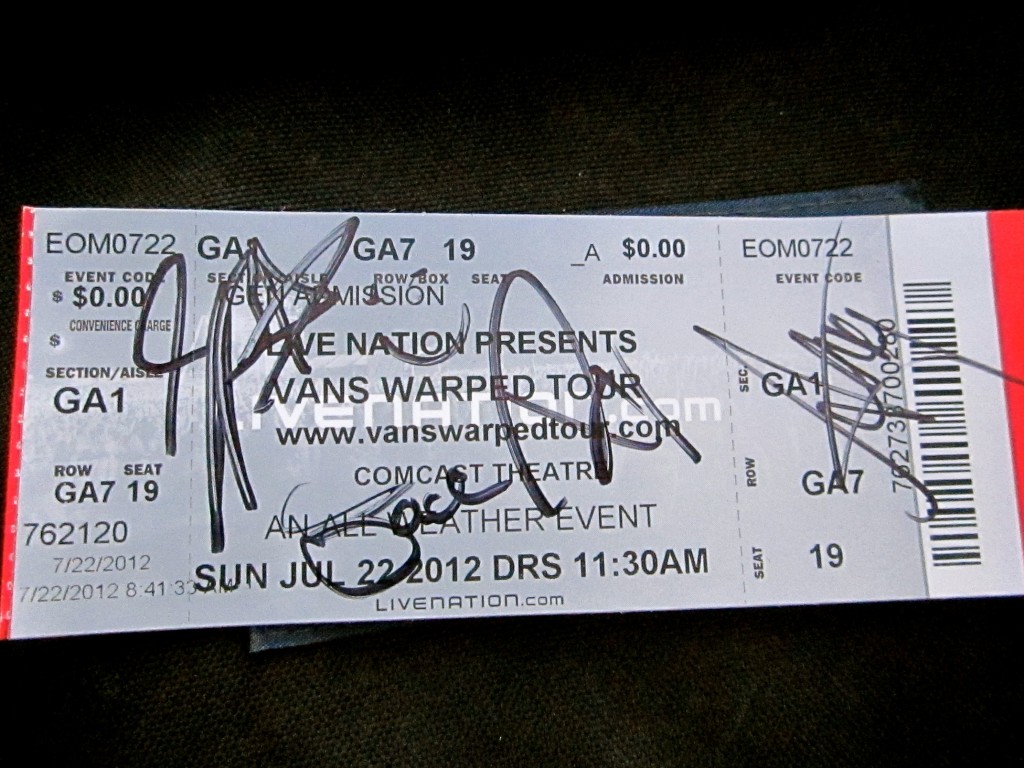 4:45pm: The band that mattered most to me on the tour’s set was finally here, Sleeping with Sirens! They were hands down the best band to shoot all day, and not just because they are one of my favorites on the tour this year. As a whole, not one band member was ever caught not smiling. The amount of love and passion these guys have on stage is unreal, and you could tell that it meant so much to them that every fan in the crowd was screaming the lyrics back to them. Not to mention, Kellin Quinn up close and personal isn’t too bad either. Speaking of Kellin, while in the pit taking pictures the girl next to me was also taking pictures and Kellin bent down and pulled a sharpie out and signed her One Direction shirt. To say the least, she was pissed. I thought it was hilarious though, but she thought otherwise. 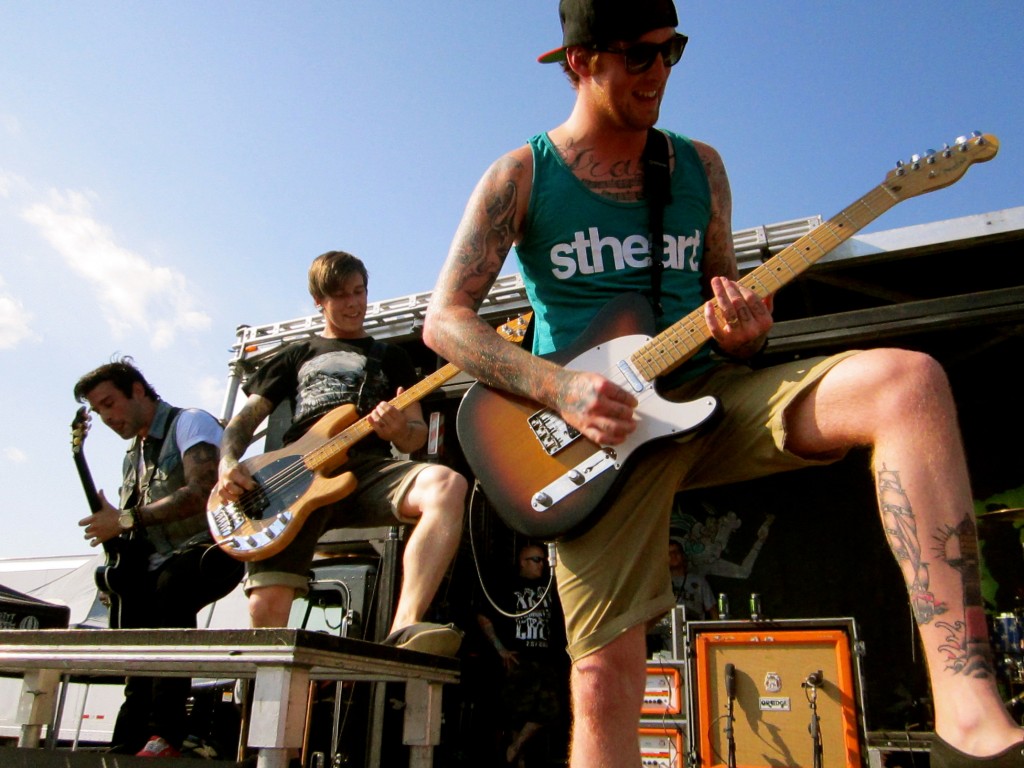 6:12pm: As I said earlier, my friend is a huge All Time Low fan and ATL didn’t play until 6:45. Regardless, we were at the stage before 6:15, and it was lucky we were there early because the massive crowd went on for days. It was possibly one of the biggest crowds we saw all day. I went into the pit for photos and before I knew it I was getting hit on the head with training bras. No seriously, All Time Low fans throw numerous bras on stage during the set. And usually the 13-year-old girls miss, and they’d hit me in the pit. However, All Time Low put on such an energetic set and even set out into the crowd to show their fans some love. Even as I’ve grown out of this band, I still respect them and the music they make. I think they are such genuine guys just looking to have a fun time and play music, and it totally shines through their music. 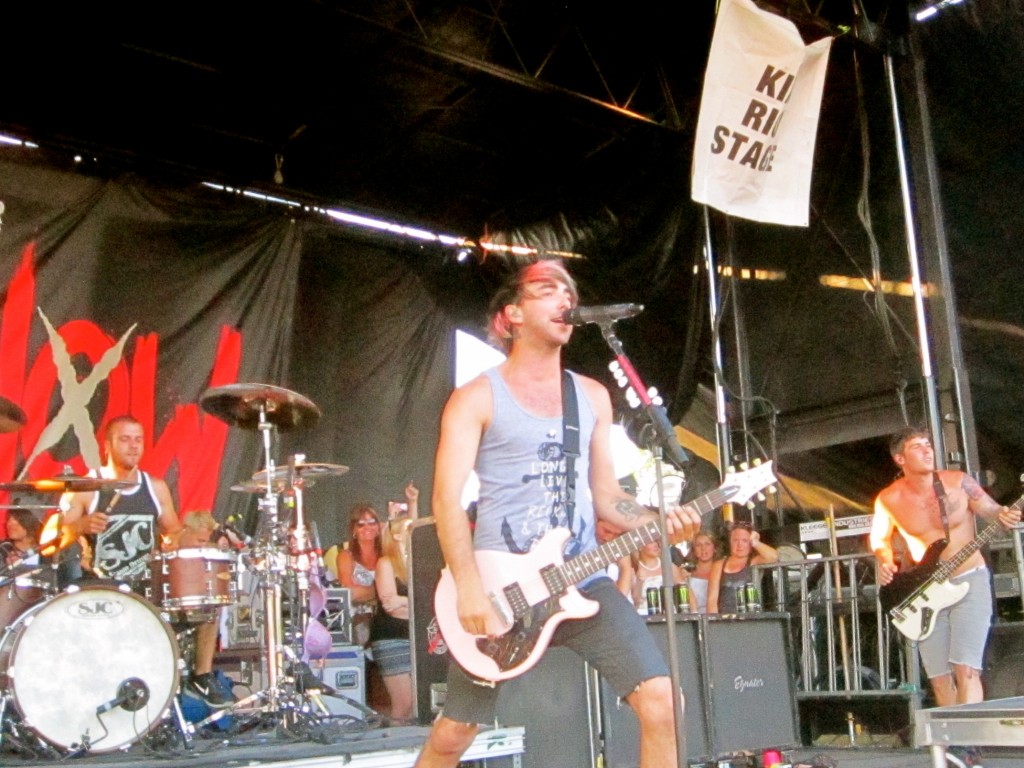 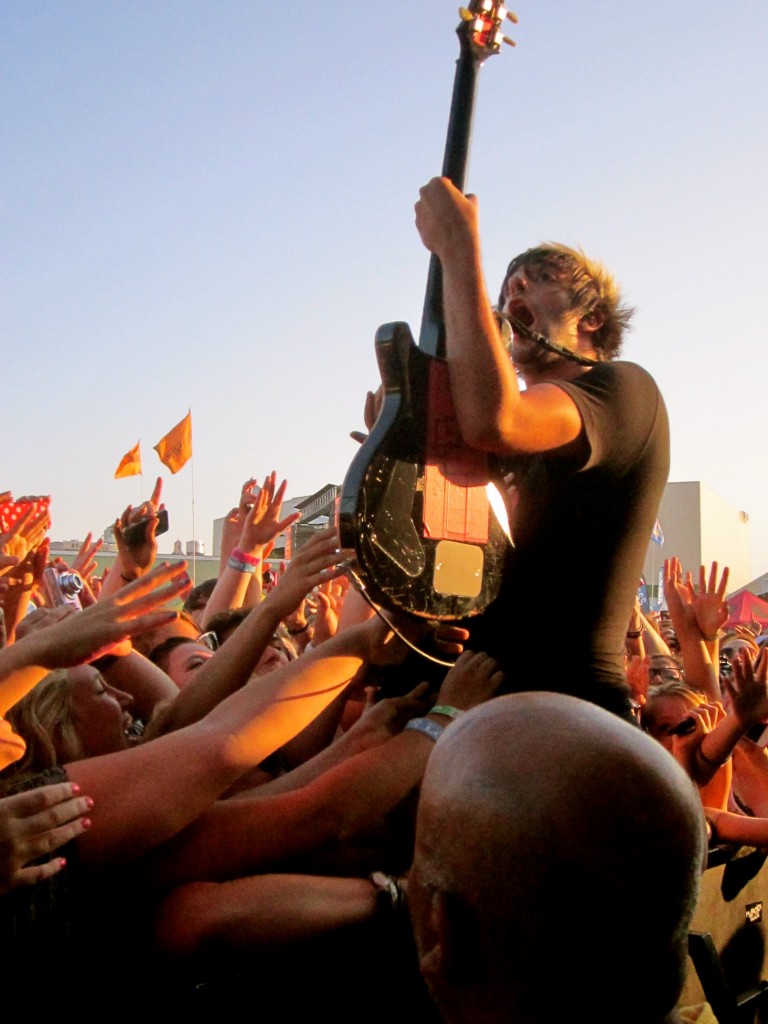 7:48pm: The day, as far as we were concerned, was over. It was a long day in the heat and we were ready to hit the diner. Nothing can’t cure a warped hangover like a tall glass of water and Turkey Club…okay maybe not true for the Turkey Club but the rest of the diner food was sketchy and we were hungry.

All in all, Warped Tour was as perfect as ever. This years line up was one of the best I’ve seen in years and I only expect more from Kevin Lyman and the Warped Tour Team. Bravo on an awesome 2012 season! To see the full album of photos from this day, check it out on our facebook page: www.facebook.com/stateinthereal