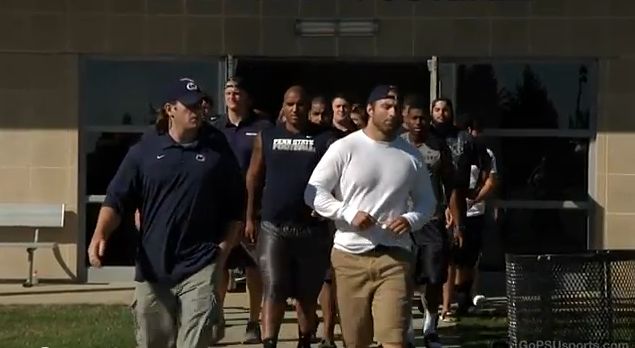 “This is the greatest opportunity a Penn Stater could ever be given. We have an obligation to Penn State, and we have the ability to fight not just for the team or program, but for an entire university, and every man who wore the blue and white on that gridiron before us”
“We take this as an opportunity to create our own legacy. This program wasn’t built by one man, and it sure as hell won’t be taken down by one man. This program was built by every alumni, and every player before us, built on their backs.”
“When we go out there every Saturday, we suit up for the team first of all, but second of all it’s for the fans, students, and all of the families in Nittany Nation who have supported us through all of this.”
“I’m personally calling out every member of Nittany Nation, all the students, faculty, fans and alumni. Please come support us thorugh this, because we need you as much as you need us, and together we are going to get through this thing till the end.”
You have to love these guys. Probably one of the only programs in the country where the players would stand in front of cameras, after everything, and show this much pride in their school, fans, alumni and students.