Chris
Events
Comments Off on Steel Magnolia at Penn State 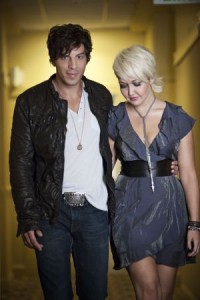 There is a cool moment, preserved for posterity in TV syndication, when Joshua Scott Jones and Meghan Linsey, the duo known as Steel Magnolia, make the connection that changes their lives. It is cattle call audition day for season two of CMT’s Can You Duet?, and Josh and Meghan are secretly ambivalent about the whole thing, skeptical that the judges (especially that big-time record executive on the left) aren’t going to get their very unique sound.

But a few bars into the first verse of their song “Ooh La La” we see that record executive has his first ‘Ah Ha’ moment. A blank face cracks into a grin. Then comes the chorus, with its rising swell of surprise and passion. Naomi Judd points at her own goose bumps. And by that point, the record executive is wearing a 100-watt smile.

His name is Scott Borchetta, and his “yes” vote that day began the journey that would put Steel Magnolia in the winner’s circle of Can You Duet? and on his label, the feisty and independent Big Machine Records. The eagerly awaited debut album you have here also makes its first impression with “Ooh La La,” and if you have a musical bone in your body, you too will be smiling halfway through. Spirited, romantic and elusively different, it’s the perfect three-minute distillation of Josh and Meghan’s fresh, soul-leaning approach to country music. They do not sound like twins in close harmony; rather they’re a study in contrasts showing how two bold and identifiable voices can mesh together, making something bigger and better.

In the year since winning the show, Steel Magnolia has gone on to win over many more influential fans and supporters. Their bracing take of “Keep On Lovin You” by country soul powerhouse Chris Stapleton broke through as the highest charting debut single by a co-ed duo in Billboard history. The song has been downloaded more than a million times and landed in a major motion picture. Josh and Meghan spent the summer of 2010 touring alongside Brad Paisley on his massively popular H20 Tour, and even before the release of their debut album, Steel Magnolia snagged nine major industry award nominations, including Vocal Duo of the Year at the CMA Awards. No wonder then, that you’re seeing Josh and Meghan on every “Whom To Watch” list in country music.

Josh and Meghan’s path to newly hatched stardom was paved with surprises for both. “I’ve got to be honest,” says Josh. “I never in my wildest dreams thought I’d be in a duo with my girlfriend. But it was an undeniable thing, and people connected to it.” And as for Meghan, she says “we both had to swallow some pride and get on the wagon, because there was definitely something special there. Other people could see that. In fact everyone around us could see it but us.”

But before these two strong-willed, powerful personalities could meet, they had to arrive in Music City, and they did so from very different places.

Meghan spent her childhood in New Orleans. Then her family moved to nearby Ponchatoula, just north of Lake Pontchartrain, when she was 12. Even then, her plans to become a professional singer – sparked by the gift of a karaoke machine – were already in place, aided by a very supportive mother.

“When I got to be about 14 my mom helped me put a band together, and most of the guys in this band were like in their fifties and had been playing in the Quarter for 20, 30 years,” Meghan says. “So it was an age when you soak things like that up and I think I learned a lot playing with guys like that. It definitely influenced the way I sing and what I was singing.” That included soul classics, up to date blues tunes by the likes of Susan Tedeschi and hard-core country, especially the expansive and explosive music of Tanya Tucker.

“There’s definitely an element of soul in country music” Meghan says when asked about the defining aspect of Steel Magnolia’s sound. “Country is all my mom listened to. That was definitely in my blood. My dad was very 70s rock and roll. The combination of my dad and my mom’s influences along with living in New Orleans in such a musical environment, it definitely all influenced the way I sing.”

Josh figured out his musical identity in a very different environment. Born in Houston but raised by an adoptive family in rural Illinois, his father was a factory worker on weekdays and a minister on Sundays. At home Josh heard his folks’ classic country music and his older brother’s rock and roll explorations. He loved Waylon Jennings and the Beatles. The rest came at church. “The music in our little country churches with 10-12 people was pretty traditional,” he says. “But we ended up going to an all-black church called Second Baptist when I was 13. We went there for two years, so I got immersed in the stomp.”

So immersed in fact, in his early teens, Josh wrote a song about racism in the wake of the Rodney King riots and basically made his songwriting debut in front of his congregation. It went over well, but not without overcoming an epic case of nerves and, in some ways a career was born that day.

Josh came to Nashville as the leader of a rock trio and earned some notice on local radio. Meghan had her sights on a singing career and moved to Nashville as a new student at Belmont University. After about a year, she focused on singing and her job at a downtown karaoke bar. If you’ve heard one biographical detail about Steel Magnolia you know that they met at karaoke, where they got to hear each other sing for the first time. (The now famous meeting became the slightly fictionalized storyline for their debut music video, “Keep On Lovin You.”)

Their on-stage/off-stage chemistry also started giving rise to original songs. The very first one they wrote together, “Edge of Goodbye,” became a calling card and made their debut album. As they worked and wrote, the dynamics of their duet style worked itself out.

“Well I’m not a very good follower so I always seem to take the lead and Meg’s just really got a good ear,” Josh says with a mix of self-deprecation and admiration of his partner. “I think we both have a knack for melodies. I don’t think there’s a lot of thinking that goes on behind who’s going to sing this or that line. It’s more of a tonal quality that kind of comes together and just works, almost like a sibling thing.”

That’s not to say a ton of work and creativity doesn’t go into the Steel Magnolia sound. Case in point was the strikingly new arrangement they offered of Hank Williams’ “I’m So Lonesome I Could Cry” during Can You Duet?. Worked out in the middle of the night in a ladies’ room of the Gaylord Opryland Hotel, Josh and Meghan took a classic and honored it with the reworking of some of its melody and creative tempo shifts. Meghan remembers, “We both thought ‘we’ve got to come up with something that’s going to make this song different.’ We knew it was a risk.”

Obviously the risk paid off, and the pair found themselves at Big Machine planning their debut album. The news that Big Machine had lined up super-producer and guitar star Dann Huff to produce the album was both inspiring and intimidating. At an early meeting, Josh went so far as to blurt out: “I want to make sure we make a Steel Magnolia record, not a Dann Huff record.” It’s an assertion he looks back on as audacious but necessary.

“I was so scared. We’d worked so hard. I just had to say it. I didn’t want to get swallowed by a beast. I didn’t want something bigger than us coming in and taking us over and making us sound like something we weren’t. You have to stand up for what you believe in.”

Meghan fully supports the slightly impolitic move. But she’s also quick to note that Huff was amazing to work with. “He is the most humble guy you ever met. And of course he’s very good at what he does and he definitely challenged both of us.”

The resulting album takes a real journey, from the sparkling, genre-less opening tracks to songs toward the back that pay more homage to country music tradition and more complex subject matter. Josh and Meghan penned seven of the 12 tracks, including “Last Night Again,” a budding romance song that was on the bubble for making the CD but turned out to be a band favorite. And then there’s the funky, sexy “Eggs Over Easy,” driven by harmonica and acoustic guitars, leaving tons of sonic space for the locked-in harmonies of Josh and Meghan to really shine. Then, after a swampy blues written by Keith Urban called “Homespun Love,” we hear Josh really step forward as a hard core country songwriter on “Glass Houses,” a powerful song about addiction and the darkness that sometimes has to come before the dawn.

When this powerful collection arrives, it will be merely the capstone of a year that’s seen Josh and Meghan come into their own. They’ve shined at the Grand Ole Opry and gotten their stage legs in arena atmospheres. They’ve reached back to their fans over the internet and shared some of the love and affection that’s clear when they sing together.

But then Steel Magnolia is a partnership at so many levels. They confess that working together and shaping their music is a lot more challenging than just being together as people. But they say the creative tension has always produced great results. “We’ve learned a lot from each other,” says Josh. “About everything. When we got together, I was more the writer it seemed, and she was more the singer. And we’ve met each other in the middle.” Adds Meghan: “When I first started hearing his stuff, it was real raw and emotional and I felt it when he would sing. I learned a lot just by singing with him. I feel like Josh has become a better singer and I’ve just let go a little more.”

It’s rare to be a witness to this kind of evolution and artistic growth in such a short span of time. But very often chemical reactions happen faster when heat and pressure is applied. The experiment is still underway, but with the evidence in so far, Steel Magnolia’s fertile minds and voices should be spinning off light and energy for quite some time.