It seems to me that we in the vinyl-owning community all have that one special album that must glide over our turntables before we can move on with our musical hunt. An obsessive need to find that specific record instinctively takes over upon entering any record store.This melodious game-changer is what I will henceforth call the “Holy Grail LP”. When it’s held in human hands, the world seems to pause, only for reality to be restored as the first notes ring out from a turntable.

For me, that sweet victory was the 2009 album Humbug by Arctic Monkeys. My incredible love for this band has been years in the making but this is the album that truly sealed the deal, way back when I was just figuring out that I landed on a goldmine. This happened to be at the same time that some of my music tastes began shifting to heavier stuff. It also holds a lot of sentimentality for me because it got me seriously thinking about the poetry of lyrical writing, which is something I try to pay attention to quite a lot now. I’d say Alex Turner (lead singer) is one of the most clever poets in music currently.For a pretty picky listener it’s insane that I can go through an entire track list without even once getting the urge to skip a song but that’s what this album means to me.

And yes I will admit that I jumped on the kairos of their newfound American success with AM to write this post so let’s harness that love and throw it towards Humbug!

The Search: Tragedy and Redemption

We can also probably agree that there’s something romantic about stumbling upon your favorite album while casually browsing the aisles. The notion of organically finding a lesser-appreciated Arctic Monkeys album before Summer 2013 was unlikely to come to fruition so the scene in my mind did not play out until much later.

Wish I had a more glamorous story to share with you but the soul-crushing truth is we live in an era of the Internet and I couldn’t find this damn thing anywhere.

Don’t get me wrong, I searched far and wide. From the east coast (Princeton Record Exchange) to the west (recruited a friend to check Amoeba Records) but it just was not in the cards. Desperate times called for desperate online purchases and here we are a couple years later. But even though I didn’t get that oft-dreamed-about moment until randomly finding a copy in Philly last year (at a place called Long in the Tooth. Props for stocking this beauty), let me assure you that the quality is good regardless. I love you PREX but you broke my heart.

Humbug’s vinyl edition comes with a standard lyrical “booklet” with some band photos on the inside and also a free digital download; killing two birds with one stone. Nothing really major going on in the sleeve but simple can be nice!

Sound-wise, I don’t know if vinyl sounds better or worse than digital (or maybe it’s just my cheap Crosley?) but no one can deny that the experience is much more sensory.

Holding the record in your hands. Carefully setting the needle down. Waiting for that scratchy crackling sound to stop and for the song to begin. Finally hearing it play out in front of you and seeing the mechanical workings as they happen.

Even what would seem to be a hindrance in that you can’t really skip songs feels like a nostalgic waiting game and serves to build up suspense. A listener hears the songs in the exact order that they were meant to be experienced.

Digital doesn’t even begin to compare.

But let’s get into the actual album. It’s Arctic Monkeys’ third and what I consider to be the best of their repertoire. Palpably darker than its predecessors and lyrically more mature, Google.com calls it “post-punk revival”. If you’re like me then that doesn’t give you very much to go off of.

So stay with me while I briefly break it down, song by song:

4. Secret Door- “She swam out of tonight’s phantasm, grabbed my hand and made it very clear. There’s absolutely nothing for us here”. A melodic sensation and lyrically impeccable.

5. Potion Approaching- “If I could be someone else for a week, I’d spend it chasing after you”. Enough said.

6. Fire and the Thud- “If it’s true you’re gonna run away…tell me where, I’ll meet you there”. A tune to swoon.

7. Cornerstone- Another fan favorite. If you’re craving a moody ballad about projecting obsessive romantic affection onto others, you’ll love it.

And now I have a reason to bring up this ridiculous music video (can I even call it that?)

8. Dance Little Liar- A cheeky gem with a slow build but the instrumentals at the end are worth it.

9. Pretty Visitors- Definitely the fastest track of the bunch. Features one of Alex Turner’s first forays into what could be considered “rap”. I have a personal connection to this one particularly since it was the song they opened with when I saw them perform for the first time. Also what I believe to be their only song featuring an organ…

10. The Jeweller’s Hands- Easily the underdog here, however a friend of mine recently rediscovered its low-key genius. Moral of the story: even if you think you don’t like an Arctic Monkeys song, you actually do…  🙂

Please Accept This Holy Grail LP Into Your Life

To be blunt, Humbug is exceptional. If you like an album that’s pensive but doesn’t take itself too seriously then get your hands on this treasure of auditory delight. You can thank me later. 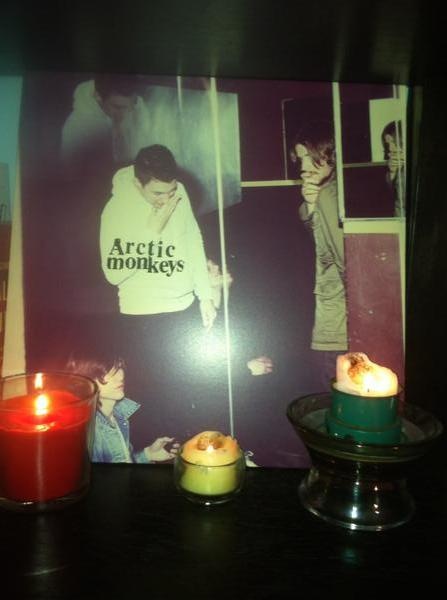