Cast of hit MTV show to speak at Penn State 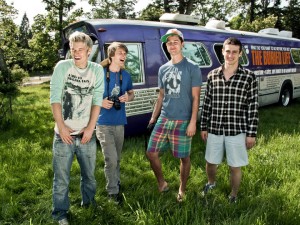 A review of what you missed…

So you missed “The Buried Life”, well SPA should be recognized for setting up an awesome event like this for Penn State Students.  All four guys, Jonnie Penn, Duncan Penn, Ben Nemtin, and Dave Lingwood put on a tremendous presentation that was inspiring to say the least.  The whole event consisted of them telling there story about how “The Buried Life” came to be along with how they decided on the name.  They talked about setting up there first summer tour, which ran for two weeks after raising the money to do so through various jobs and sponsors.  “The Buried Life” guys also talked about acquiring their tour buses, and the other random experiences they had come in contact with on the road.  Penelope, a big purple bus was not their first tour bus just so you know.  They showed pictures of themselves in college and on their journeys, and also various video clips, and pictures of their first “Buried Life” experiences.   If you ever get a chance to see the “The Buried Life” on a campus tour or anywhere else, you no doubtingly should because these guys truly care about others and what they are doing.  Penn State students at the end even got to personally tell their answer to the four guys in regards to this question, ” What do you want to do before you die?”

Telling anymore than this review would simply be ruining the experience of meeting and/or seeing these guys, “The Buried Life” live in person.  I’ll leave that up to another blog to disclose the rest.

The Late Night series of the Student Programming Association announces the cast of MTV’s hit show “The Buried Life” will be stopping at Penn State as part of their college tour.  The event will be held in Alumni Hall on Friday, April 1st, 2011 at 10 pm.  This event is ticketless, and is free to Penn State students with a valid Penn State ID.

Four friends from British Columbia came up with a list of “100 things to do” before they die.  Their show on MTV is a documentary that follows the four friends across North America as they try to accomplish each task and cross it off of their bucket list.  For every task they achieve, they also help someone in the community cross something off of their list.

In 2010, The Buried Life was nominated for the Do Something TV Show Award as part of VH1’s Do Something Awards.   They were awarded for their efforts to encourage people to try and achieve their goals and aspirations.