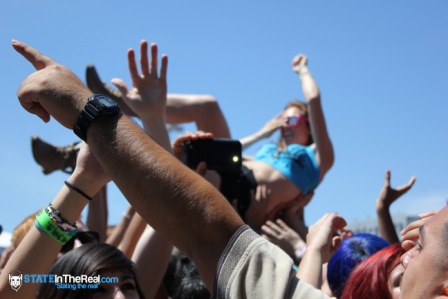 Chances are, if you’re a frequent visitor to State In The Real’s website, then you have read about the New Jersey Warped Tour experience. Well, I know many of you aren’t from Texas, but this is my San Antonio experience.
This was my second year at Warped, and my first as press with SITR. Because I had to leave early, I unfortunately didn’t get to see many bands.
But I had a great time nonetheless.
Upon arrival, I had no idea what to expect. For me, this year’s line-up ranged from bands I had never heard of to bands I hadn’t heard from in a while (mostly my fault).
Once I met up with my friends, we headed to the Kia Soul stage to check out Woe, Is Me. They definitely managed to wake me up. As the first band on that stage, they came out with energy and were ready to go. Unfortunately, I wasn’t able to pay as much attention to them as I wanted as I was busy learning the ways of taking pictures whilst avoiding getting hit by crowd surfers. 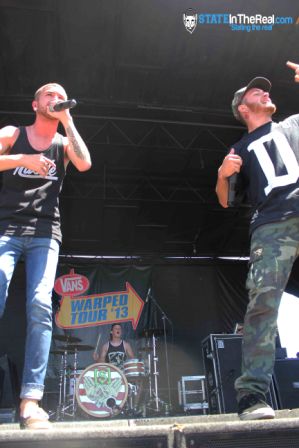 After I got my Woe, Is Me shots, I ran over to the Monster Energy stage to check out/get some shots of I See Stars. On my way, I happened to pass the band New Years Day on the Tilly stage. I didn’t hear their music, but from the Mickey Mouse-esque character they had on stage with them wielding a saw, it looked like they put on a really interesting show.

I’ve never really listened to I See Stars, but they put on a really cool show. Considered an “electronicore” band, the band had a lot of head banging going on, but their electronic/synth sound had everyone else bouncing up and down to the beat. Also, thankfully, there was much less crowd-surfing.

Before my interview with Wallpaper. (look for it later this week) I caught a bit of MC Lars on the Spotify Stage. Accompanied only by a laptop and drummer, and wearing a Legend of Zelda cartridge around his neck, MC Lars was all energy and his style seems to include embracing your inner “nerd”. Rapping while jumping back and forth from the stage to the speakers, he was all over the place. 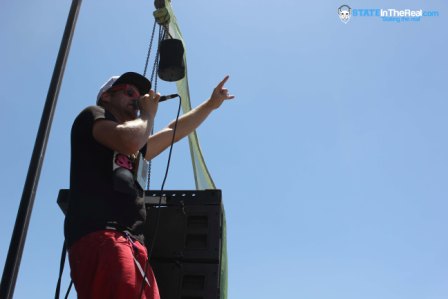 After my interview, I caught the end of William Beckett’s performance in the Acoustic Basement. He was easy to find, as there was a huge crowd at the tent singing along with him. As I got there, he was finishing “About A Girl” and started singing his new single “Benny and Joon”. That man really does have the voice of an angel. 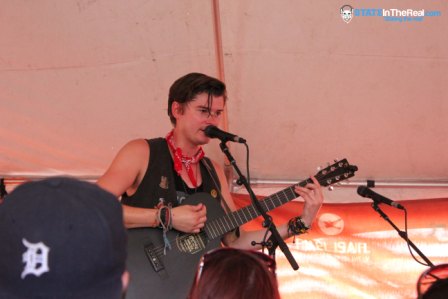 Next, on the Kia Forte Stage, I caught Motion City Soundtrack’s performance. I have loved their songs since middle school, and it was awesome to finally get to watch them perform; especially the keyboardist, he was playing his heart out. It was hard to focus on picture-taking as I was busy singing along. 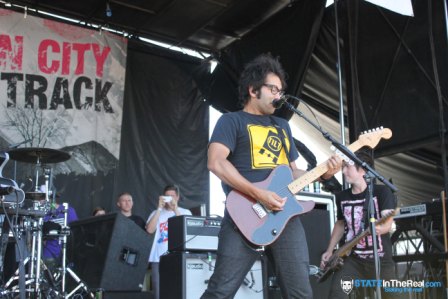 The last band I was able to see for the day was Wallpaper. You may have heard of them from a post made earlier in the year. I was excited to see them perform and they did not disappoint. I know I have said that every band had energy, but somehow this felt a bit different; when the beat would come in, they wouldn’t just jump around, they would let go. It felt more like I was at a party (a really good one) rather than outside watching a performance in the hot sun.

After their performance, I was able to go back into the nice, air-conditioned building for two more interviews with William Becket and MC Lars and was lucky enough to be given two more with Crossfaith and David from Big D and the Kids Table (look for ALL those throughout the week!) before I had to leave. 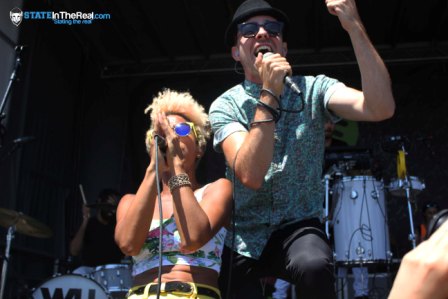 This year’s experience was better than last year’s by far. Although there were many more bands that I hadn’t heard of, I found some new music to listen to, and I got to see different types of groups perform.
In the twenty minutes between leaving I See Stars’s performance, passing All Star Weekend’s, and listening to two local rappers perform while MC Lars was setting up—I saw how diverse really Warped Tour is.