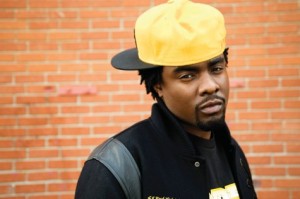 The Late Night committee of the Student Programming Association, SPA, is excited to announce that rapper Wale with special guest Black Cobain will perform at Penn State.  The concert will take place on Friday, October 21st in Alumni Hall.  The concert doors will open at 9:30 p.m with the show starting at 10 p.m.  This is a free event with a valid Penn State student ID and is based on a first come, first serve basis.

Wale’s musical career became prominent around 2006 when his song, “Dig Dug (Shake It)” became popular in Wale’s hometown of Washington DC. After the success of his song, producer Mark Ronson reached out to Wale and signed him to Allido Records, where he recorded numerous mix tapes and started to appear in National Media, such as MTV.  In 2008, Wale signed to Interscope Records.  His debut album, “ Attention Deficit” came out in 2009 with his hit singles, “ Pretty Girls,” “World Tour,” and “Chillin.”  In 2011, Wale signed to Rick Ross’ label Maybach Music Group and was part of a Maybach Music Group compilation album.  Wale recently finished his newest album, “Ambition” and is available on November 1st, 2011.

Information below taken from http://www.ralphfolarin.com/news/wale-adds-meek-mill-pusha-t-new-dates-ambition-tour

Already in the throes of a national tour to support the release of his sophomore album “Ambition” (out 11/1/1), Wale recently added several new dates to the tour to meet his growing demand.