We ALL Are Nittany Lions United

Once again, every person with basic cable, an internet connection, or any type of access to social media, has their sights set on Penn State. Obviously none of us want this ridiculous amount of negative, scrutinizing attention. But as the NCAA has made it abundantly clear, what Penn State students actually want doesn’t really matter right now. And as the media and general public have made it clear, whether they are just with cynical individuals  who enjoy seeing giants fall, or they really truly believe that our entire school should have to pay for the actions committed by only a few, there are many people who want to see Penn State fall apart.

However you wanted this all to play out. What is done is done. No matter how much you want argue to death whether or not the Freeh Report is conclusive, or the NCAA sanctions are fair, no matter how many witty and provoking Facebook statuses you can come up with (although they are amusing and relieve stress,) it doesn’t matter: The onlookers have taken their positions, and they’re going to act how they’re going to act.

All that really matters now, all that we can even control is how we act.

To spite what a horrific situation this is, we’ve been given an opportunity that few will ever be able to experience. We’ve been given the opportunity to show the world that under the highest levels of scrutiny, with so many hoping and wishing for us to fall apart, we can stand united.

With that ideal in mind, one Penn State alumni has taken initiative to remind the world that while football is near and dear to our hearts, its not our greatest strength. Our greatest strength lies in our ability to work together, For The Kids. And that is exactly what we need to keep doing. 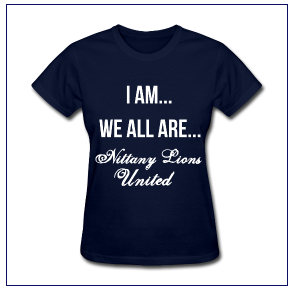 This shirt was created by Sam Christie-Sgro to remind everybody watching Penn State that we will stick together as we wade through this mess, and that we won’t stop doing what we truly believe in. All of the profits from these t-shirts will be split between THON and RAINN.

Sam- ” I thought if there’s one thing that really unites the Penn State community, it’s our involvement in various charity organizations. So I figured I’d design a simple t-shirt and donate all the profits to RAINN and THON. I used “I am” for the individual, because Penn State isn’t a handful of administrators, it’s each individual student. And I used “we all are” to drive home the message of unity. Peoples opinions on the Sandusky scandal, who was right, who was wrong, what did or didn’t happen, that doesn’t really matter. What matters is how we respond as a community and a university. I figured this would point us in the right direction at least, as Nittany lions united, for the good & for the glory”

Shirts can be purchased here.