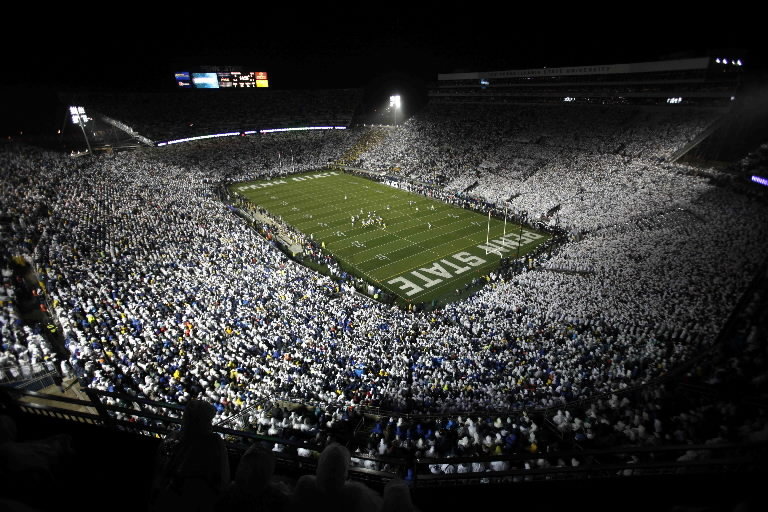 Waking up this morning I didn’t realize it.  I took my normal cruise through Facebook and Twitter, and then it hit me.  We are two weeks away from Penn State Football! The thing I have been yearning for since it ended.  Penn State, it’s time to rejoice.  Two short weeks from now, you will be in the tailgate fields, eating great food, drinking something that hopefully isn’t Natty, and enjoying the company of your friends and family.  That’s what Penn State Football is really about.  When in good times, and in bad, that is the one thing that has never changed.  If Penn State culture is getting up early, even for a night game, heading up to the tailgate fields in the brisk morning hours, reuniting with friends and family members, and going to watch some football; then I’m completely okay with that.  It’s not about getting wasted (even though it happens), it’s about enjoying time with people that you love.  Everyone may be gathering for a football game, but realistically that’s just the added bonus.  I have made some of my best memories at Penn State tailgates.  Born and raised in a family that held season tickets, I have been to my fair share of games.  Obviously the big games stick out in my mind (324, 400, 409, Nebraska 2012),  but there is one thing I will definitely never forget;  those times spent with friends and family.

In 2 weeks, when you descend onto the tailgate fields at Beaver Stadium, it will be a special day.  It’s a new era for Penn State.  It may not be the biggest, and best game of the year, but the game versus Ohio University will be one of the best atmospheres ever at Beaver Stadium.  I’ve never seen a fan base more behind this team, than we are right now.  Also, I’ve never seen this university come together in such a way, that it feels like we are all, literally, one big family.  Obviously Penn Staters are always friendly with each other, but this feels different.  Everyone is in it for the greater good.  The rebuilding of our tarnished name.  The new era in our storied football program.  The continuation of what we know.  It all is supported by one team, and that team is you, us and we.

I can’t wait for September 1st.  I’ll see you there Penn State!

We Are,
Matt Andersen